Photographer Christopher Frost has put together one of the most comprehensive and detailed macro lens shootouts we’ve ever seen. In this video he tests the latest 100mm (ish) f/2.8 macro lenses from Canon, Nikon, Sony, Sigma, Tamron, and Laowa to see how they compare in terms of build, usability and performance.

In terms of age, the Nikon lens is the oldest, followed by the options from Canon and Sigma; the Laowa, Tamron and Sony lenses are all quite new. 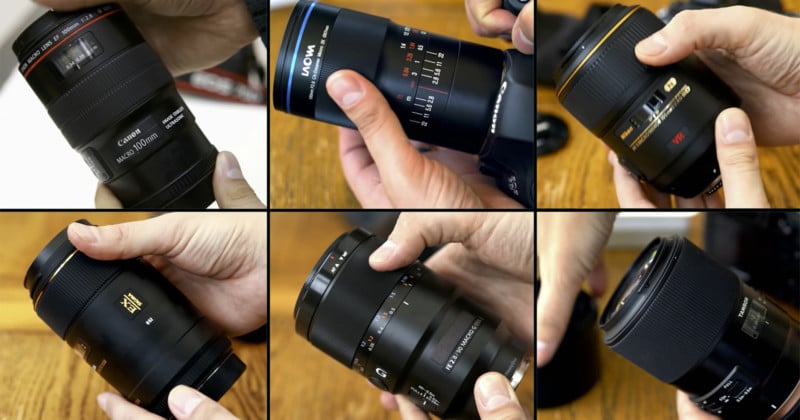 For the sake of consistency, all of the lenses were tested on a 42MP Sony a7R II, with the exception of the Nikon lens, which was tested on a 45MP Nikon Z7. That puts the lens at a bit of a disadvantage given the additional 3MP of resolution, but Frost compares all six lenses at the same level magnification.

It’ll be hard to summarize the findings here, so if want the most detail (get it…) you should really watch the full comparison. That said, here are a few key takeaways for anyone looking for a TL;DW version of the 14-minute video:

The worst performer by far was the Nikon lens, so much so that Frost goes to great lengths to reassure viewers that he did focus it properly and it was a properly working copy of the lens.

The standout of the bunch in terms of price-to-performance is definitely the Laowa. It’s lacking some nice-to-have features like in-lens stabilization and autofocusing capability, and you don’t want to stop it down past f/8 if you can help it, but it’s a phenomenal performer and the only lens that can do 2:1 without an additional extension tube.

Check out the full video up top to dive deeper into each of the results above, as well as vignetting, distortion tests, and more. If you’re looking to buy into a premium macro lens—and a lot of people are these days—this is one of the best buyer’s guides you could ask for.

This Designer Turned the Photoshop Toolbar Into a Custom Keyboard

GoPro Hit Hard by Coronavirus: To Cut 20% of Workforce, Retailers from Sales