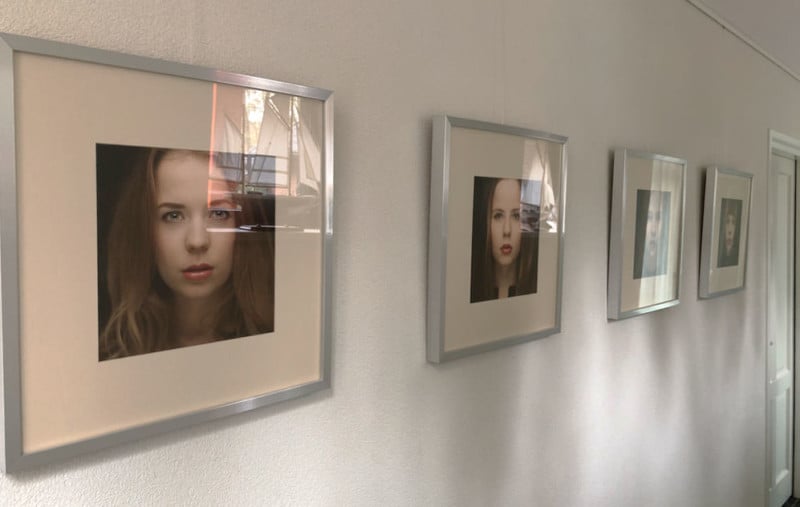 In our hallway, we have some family portraits of our kids, but the portraits were taken some years ago — time for some new ones! But we would also like to hang the portraits of their partners. The previous portraits were color portraits, and this time I would like to do some black and whites. So the challenge is taking seven portraits, each with the same look and feel. This is how I did it.

First of all, the seven new portraits should have the same look. I chose a square format, f/2.8, and a small light to the left side of the neck. So sharp eyes with fading sharpness to the back of the heads. I have a lens that goes to f/1.2 (the Canon 85mm), so the sharpness at f/2.8 should be great.

My studio was made mostly black. The main light from right above and stopped all the way down. One main fill light from under to fill up the shadows. One light at the background to make a beautiful gradient. The fourth light with a grid should make a small light at the left of the head.

After setting up the lights with the right settings it was time to get the kids in the studio. I asked the kids to set their face to neutral. Well, that was easier said than done. Because the lights already were set up, I could only focus on framing and wait for that neutral look.

After the RAW images were shot it was time to do the post-processing. After removing the pimples and blemishes on the skin in Photoshop, the pictures were sent to the Nik plugin Silver Efex Pro. I made two presets, one for the girls and one for the boys. The presets were made to preserve that all the images had the same look. The girls preset was a little softer while the boys preset was a little harder with more detail. All the black and whites had just a tiny bit of sepia toning (only 10%) to give it just that little bit of warm feel.

After this post-processing, it is time to print. I chose for these portraits a Canson paper, Canson Baryta Prestige 340gsm. The processed version of the image was sent to Photoshop and resized to 40x40cm. After that the images where sharpened in Nik Sharpener Pro 3 Output Sharpening. I downloaded the right ICC profile for the paper on the Canson website. A magic moment occurs for me when the print is coming out of the printer. The printing process with that smell of ink is for me that magical moment.

Finally, it’s time to choose the right frame. In Groningen their is a frame shop called Richards Kunst In Lijsten. The same name with myself is just coincidence ;-).

Framing is an art. It makes the picture complete. Besides that, a good framed picture has to look like art in my opinion. I choose the frame as seen in the picture above. With no glass in front of the picture. The frame is almost anthracite with a small silver facet on the inside of the frame.

So my little project came to an end. The portraits are hanging in our hallway.

What did I learn? Focusing on the eye with f/2.8 can be really tricky. For post-processing, making presets can give the portraits a unified look. And finally, framing is expensive but worthwhile.

About the author: Richard Paas is a photographer based in The Netherlands. The opinions expressed in this article are solely those of the author. You can find more of his work on his website, Facebook, and Instagram. This article was also published here.

Composing Without the Camera

What You Need to Know About Flickr Pro’s Adobe Discount