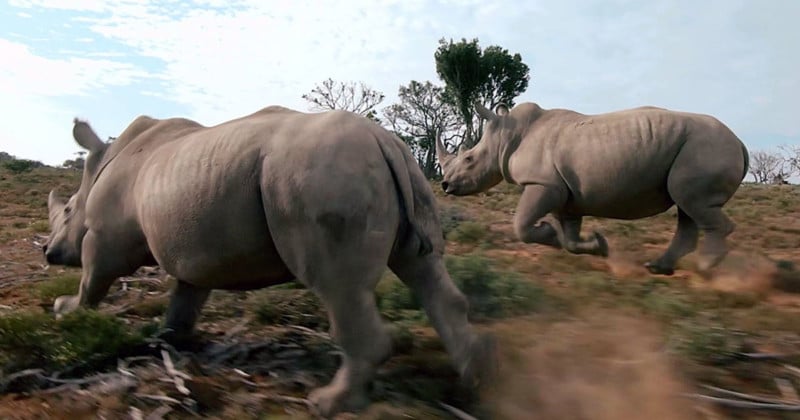 His skill level is piloting the drone is jaw dropping, and his scene visualization and video editing skills are also really advanced as seen in this video taken with permission in Saudi Arabia:

Saudi Arabia has some of the craziest landscape I’ve ever seen. I basically turned into a Star Wars pod racer while flying over these rock formations🛸. A HUGE thank you to @jayalvarrez for inviting me on this adventure, and @gatewayksa for hosting us. Music: @odesza – Thin Floors and Tall Ceilings. @brendonhayward @kasey @missnellevz @julieberry #getfpv #lumenier #airvuz #hobbywing #futaba #saudiarabia Please note that the sites of Madain Saleh are currently closed to the public whilst the Royal Commission develops the area to allow for future tourism. I received an official invitation allowing me to film and document these sites to share it with you.

Schaer, who goes by “Johnny FPV,” recently visited a game preserve in South Africa with the Rhino Rescue Project, an organization that combats poaching by injecting material into rhino horns, which “renders it useless for ornamental or medicinal use.” And posted this incredible video of two stampeding rhinos first on Facebook, and then on Instagram.

I’m in South Africa learning about the steps @vetpaw, @karmagawa, and @rhinorescueproject are taking to combat poachers. These Rhinos are being killed and pushed toward extinction for their horns which provide no medicinal value. The two Rhinos seen In the video were near a road that is actively used by poachers, and under the supervision of Vetpaw and the private game reserve, we used the drone try and push them to a safer area. While this shot turned out beautiful, I should not have flown this close to the animals. Please visit @vetpaw for more information on how you can save these Rhinos. Music: M83 – Outro #savetherhino #vetpaw #getfpv #lumenier #airvuz #futaba #hobbywing

His caption (which has been edited since its initial post) reads in part:

These Rhinos are being killed and pushed toward extinction for their horns which provide no medicinal value. The two Rhinos seen In the video were near a road that is actively used by poachers, and under the supervision of Vetpaw and the private game reserve, we used the drone try and push them to a safer area. While this shot turned out beautiful, I should not have flown this close to the animals. This is not a responsible way to film wild life [sic].

The Rhino Rescue Project also posted the video to their Instagram account, and multiple commenters questioned whether the drone was intrusive or harmful. The Project’s answer partially contradicts Schaer’s by implying that the animals weren’t bothered. 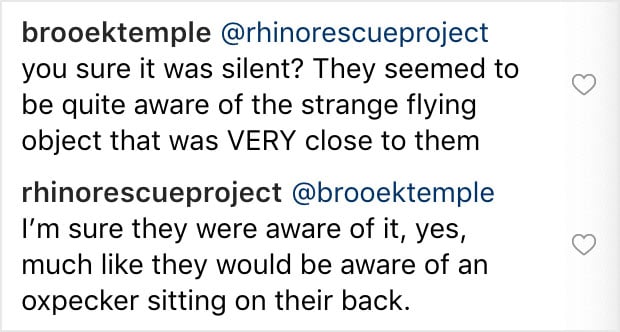 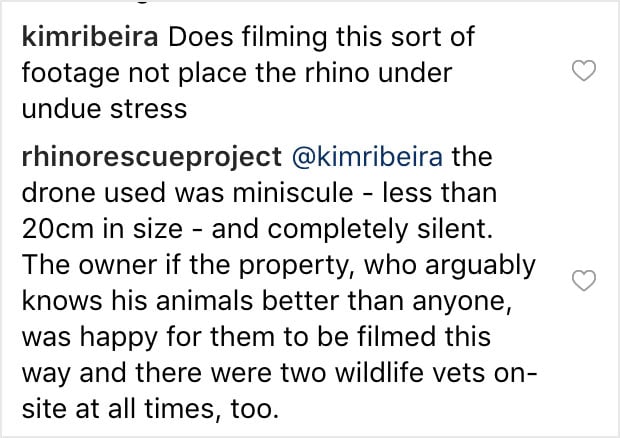 I am not an African wildlife biologist, and my attempt to contact specialists at the WWF was unsuccessful at the time of publishing. So it’s speculative to assess whether or not the rhinos were at risk as a result of this video capture (although they indisputably have very acute hearing).

Using visuals to advocate for conservationism has become commonplace. Veteran photojournalist Ami Vitale has focused many of her recent efforts on elephant and rhino conservation in Africa with images like these:

Photo by @amivitale. It is devastating to hear that China has decided to reverse its 25-year-old ban on the sale and use of rhinoceros and tiger products. The reversal allows for these products to be used in medical research or healing, uses long since proven to have no benefits to humans. This change will certainly lead to more pressure on already terribly vulnerable animal populations and further endanger the conservationists, rangers and communities who fight for the survival of these majestic creatures. Here, Sudan, the last living male Northern White Rhino left on this planet is comforted moments before he passed away March 19, 2018 in northern Kenya. Sudan was brought to Kenya from @safari_park_dvur_kralove in the #CzechRepublic in 2009. He died surrounded by people who loved him at @olpejeta and has been an inspirational figure for many across the world. If there is any meaning in his death, it's that Sudan can be our final wake up call. In a world of 7 billion, we need to start recognizing that we are not separate from nature. When we see ourselves as part of the landscape and part of nature, then saving nature is really about saving ourselves. Today, fewer 30,000 rhinos and 3,900 tigers remain in the wild. We are witnessing extinction on our watch and must help them by speaking out and supporting conservation efforts worldwide, especially among the indigenous communities who are on the front lines every day against poaching. Follow @olpejeta @safari_park_dvur_kralove @conservationorg @nature_africa and others to learn more and get involved. @everydayextinction @kenyawildlifeservice @thephotosociety @natgeo @natgeoimagecollection #LastManStanding #SudanForever #WorthMoreAlive #OlPejetaRhinos #NorthernWhiteRhinos #protectrhinos #DontLetThemDisappear #rhinos #saverhinos #stoppoaching #kenya#northernkenya #africa #everydayafrica #photojournalism #nikonusa #nikon #nikonambassador #nikonnofilter #amivitale

Congratulations to my dear friend, veterinarian Pete Morkel, shown here with one of the last northern white rhinos back in 2009 at @safari_park_dvur_kralove in the #CzechRepublic before they were brought to @olpejeta conservancy in Kenya. Pete won the Prince William Award for Conservation in Africa, 2018 last week given by @tusk_org. I've known Pete for almost 10 years and the man is one of my greatest inspirations. He has committed his entire life to saving wildlife all over this planet and “shown complete disregard for his personal safety, whilst spending many months at a time away from his family dedicating his entire energy and attention to the conservation and welfare of Africa’s wildlife." The Telegraph writes, “You’re always taking a few blows here and there,” he laughs. He works in some of the world’s least stable countries, in areas infested by armed poachers or rebel groups like the Lord’s Resistance Army or uncleared mines. He once fractured his skull when his Cessna crashed. He reckons he has immobilised 10,000 animals. Inevitably a few have died. “Success and failure are just a heartbeat away from each other,” he says. “It can be gutting. I’ve had my share of failure and you just have to pick up and keep going and learn from what went wrong.” #gratitude #tuskawards #tusktrust #conservation #africa

Documentaries like the acclaimed Blue Planet series have used drones, light aircraft and other innovative mechanisms to capture wildlife in a way never seen before:

Schaer’s video is visually on par with Blue Planet. And yet, the Schaer footage leaves me unsettled mostly because of the context and the risk of mimicry.

The audience for Blue Planet or photographers like Paul Nicklen (a photography and biologist) arguably understand the context of what they are seeing – namely, that it was captured by subject matter experts in an effort to advocate for the environment, natural ecosystems and wildlife. Everyone wants eyeballs on their work, but for people like Vitale, there’s a consistency and purpose-driven reason to every post.

By contrast, Schaer’s work has been primarily driven by visual eye candy and “tourism.” His work in Saudi Arabia resulted in a single video in a single location with no explanation of historical significance. Instead, he likens the environment to Star Wars.

His efforts to try to raise awareness about rhino poaching should be applauded, but if it’s a single visit with a single video, then he’s playing the role of tourist. There’s nothing wrong with this approach to photography/videography per se, but the work will undoubtedly influence the behavior of others.

The rise in popularity of Urbex (urban exploration) has been fueled in large part by the dramatic photos shared on social media like this:

Congratulation @st_ella you have been selected as #urbexpeople of the day ! Keep tagging your best photo with #urbexpeople to get featured ! We are urban explorer not public enemy !

Or the ubiquitous “legs dangling off a building” photo:

Stared at this for 20 minutes, words can't explain a feeling like this. #CreateYourHype #BreakTheInternet

The desire to mimic these images leads photographers to take unnecessary (sometimes fatal) risks. The photos look awesome, but capturing them is irresponsible and often illegal.

Schaer worked with a wildlife group and with the permission of the landowner, and even then, he admits that he worked too close to the animals. But the video travels without context. Many viewers will simply think it’s cool, and some will want to replicate the footage without the benefit of working with game wardens, wildlife biologists, et al. They might use larger, noisier drones. They might be less skilled operators but still try to get as close. They might try capturing footage of critically endangered species and literally imperil the animal. 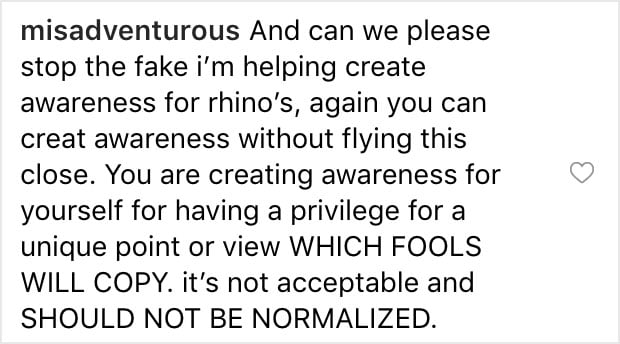 It’s a legitimate question to ask whether Schaer’s footage is actually raising awareness of rhino poaching, or whether it’s just visual clickbait. On a critically important issue that requires deep engagement, understanding, and action, most of the engagement Schaer has generated has been a double tap of the screen and a +1 in the “likes” column.