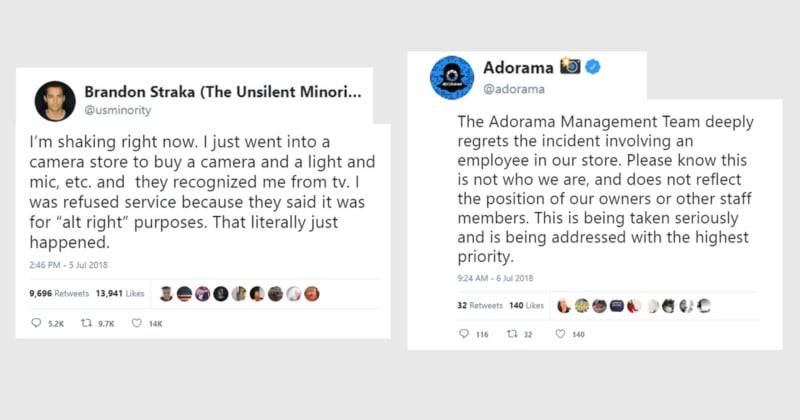 Adorama is publicly apologizing after an employee sparked controversy and backlash by refusing service to a prominent political figure who walked into the Manhattan camera superstore.

The incident occurred on Thursday, July 5th, when Brandon Straka walked into Adorama to purchase camera equipment. Straka, a self-professed “former liberal” conservative, is the founder of #WalkAway, a movement that encourages Democrats to abandon their political party.

The Epoch Times reports that after spending over an hour selecting the camera gear he wanted, Straka was recognized by another customer in line who had seen him on Fox.

“I saw you on Tucker!” the customer reportedly said, referring to the conservative Tucker Carlson Tonight show. “You’re that Walk Away guy!”

Straka then agreed to pose for a photo with the fan. After the other customer walked away, Straka was greeted by a less-than-enthusiastic employee.

“He stared at me with this kind of dead-pan expression,” Straka tells the Times. “And he said: ‘Are you planning to use this equipment for alt-right purposes? […] I’m sorry I just don’t feel comfortable selling to you. I can’t sell to you.'”

“It kind of took my breath away. I said to him, ‘Listen, if you can’t sell to me, that’s fine, but, you know, person to person, I’d like to talk to you, because I don’t think you know what Walk Away is about.’ And he said, ‘Well, you know, I’m done. I’m not comfortable selling to you. You’re welcome to talk to someone else in the store but I’m not going to sell to you.'”

Straka ended up finding another employee to help him find the equipment he needed, purchased the gear, and left the story. But after leaving, he Tweeted about the experience to his 50,000+ followers:

I’m shaking right now. I just went into a camera store to buy a camera and a light and mic, etc. and they recognized me from tv. I was refused service because they said it was for “alt right” purposes. That literally just happened.

But Straka says he doesn’t wish to see the employee lose his job over the incident.

“My instinct is telling me to practice compassion and forgiveness here,” Straka tells the Times. “I don’t want to see this guy getting fired. I don’t want anything bad to happen to him. I don’t want people harassing him.”

Despite Straka’s personal desire to “practice compassion and forgiveness,” his followers have slammed Adorama on social media for the employees actions. The camera store soon responded to the controversy with a public apology:

The Adorama Management Team deeply regrets the incident involving an employee in our store. Please know this is not who we are, and does not reflect the position of our owners or other staff members. This is being taken seriously and is being addressed with the highest priority.

“One employee allowed his personally held political opinions to interfere in his capacity as an Adorama representative,” Adorama tells PetaPixel. The store says it’s not commenting on if or how the employee has been disciplined for their actions.

Straka says he has since spoken with Adorama’s CEO, who personally apologized for the encounter.

Last night the CEO of @adorama camera store &I spoke on the phone. He was a total gentleman and very apologetic about my incident being refused service in the store. Adorama is a great store with great service, unfortunately one person chose to act outside the company’s values.

“Adorama is a great store with great service,” Straka writes, “[but] unfortunately one person chose to act outside the company’s values.”

How My Photos Were Selected for US Stamps