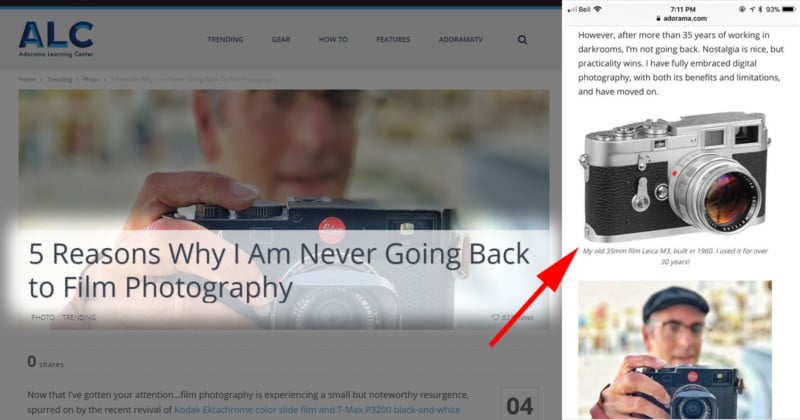 The camera superstore Adorama is closed this week in observance of Passover, but it still somehow found itself in the center of controversy among passionate film photographers over a pro-digital article and “stolen” photo.

Yesterday, veteran photographer and writer Mason Resnick (Senior Contributing Writer for the Adorama Learning Center) published an article titled, “5 Reasons Why I Am Never Going Back to Film Photography.”

Resnick’s stated reasons for never going back to film are: (1) “digital costs less than film,” (2) “digital is faster,” (3) “digital is healthier,” (4) “digital is more flexible,” and (5) “I can make beautiful prints from my digital files.”

5 Reasons Why I Am Never Going Back to Film Photography: https://t.co/zfbdhKoJrZ pic.twitter.com/TTSBI588RA

Doesn’t this mentality about film completely defeat the purpose of shooting on film? Of course digital is faster, and cheaper, but it’s not just about nostalgia, It’s about being involved in the process from start to finish #filmisnotdead

@adorama PR needed to do more background on film community. You wouldn’t put out a why “I’m never shooting Nikon again” article and choosing to shoot film is a larger decision than brands.

Man I was shopping around for a place to buy cases upon cases of acros in 120. You know who’s definitely not getting a dime of my money (on film or anything else?) @adorama. Too many options to deal with this shit.

Seriously?? How about 5 reasons why I will never shop at @adorama ever again? #believeinfilm

So @adorama you're saying that you don't want my money? Ok…..no problem 😉 It turns out it was Ken Rockwell’s photo with the watermark removed:

When asked about the “stolen photo,” Resnick gave a response that didn’t go over well with people. Michael Nguyen of Japan Camera Hunter captured this screenshot of Resnick’s since-deleted reply:

“We have identical Leicas, apparently,” he wrote in a comment that has since been deleted. “I’ve posted a new photo of my old M3 from a different angle so there’s no confusion.”

The apparent theft of Rockwell’s photo and the removal of his watermark further incensed photographers.

Hey @adorama, did you know this article contains a stolen photograph? How is @kenrockwell supposed to support his growing family if you hire content authors who steal his stuff?

That is absolutely Ken Rockwells image with his watermark removed.

Screen cap for when @Adorama takes this monstrosity down and claims it never existed. pic.twitter.com/a6gUh7WuPg

.@adorama you owe @kenrockwell a serious apology for Mason Resnick ripping one his images of a @leica_camera M3. He clearly erased the copyright and tried to pass it off as his own. Extremely disappointing. pic.twitter.com/7CUNQ1Oabw

Adorama tells PetaPixel that the apparent “theft” was the result of a mistake on Resnick’s part.

“Resnick says that he used Ken’s image as a placeholder and never intended to publish the image,” Adorama director Jacob Waldner tells PetaPixel. “He forgot that it was there and published with the image in the article.

“Taking into account that the photography community has had their trust compromised over the last few years, photographers are super sensitive and hyper-vigilant to any type of intellectual property theft. I am happy to see that the community looks out for each other.

“Ken is a good partner of ours and we would never intentionally use his work without consent. I spoke to Ken and he said that we are family and there are no ill feelings.”

Update on 4/6/18: Adorama tells PetaPixel that it is paying Rockwell $1,000 for the brief use of the photo.

Update on 4/6/18: Adorama has published the following apology to the Adorama Learning Center:

We’d like to apologize to you over the issue of one of our writers, Mason Resnick, using a photo belonging to Ken Rockwell in his recent article Five Reasons Why I am Never Going Back to Film Photography.

We at Adorama are die-hard supporters of ALL photographers and consider your photos to be your own works of art that should be protected from others using without permission.

Mason told us that he inadvertently placed an image from Ken Rockwell’s site in his article that he wrote for us, and never intended to publish with that photo.

We believed him because he’s been part of the Adorama family for many years.

However, we also learned that Ken’s photo may have been altered prior to placing into our article, and this is not acceptable to us. We have been in touch with Ken, who is a great partner of ours, explained all of this to him, and paid him for the unauthorized use of his image of the Leica M3.

We hope that you will understand that our blogging platform is a place for many writers to share their opinions and personal perspectives on photography. We welcome all perspectives and will continue to do so.

We also take full ownership of this issue and will ensure that this never happens again. We hope that we will rebuild your trust in us.

How I Photographed the Double Diamond Fuji