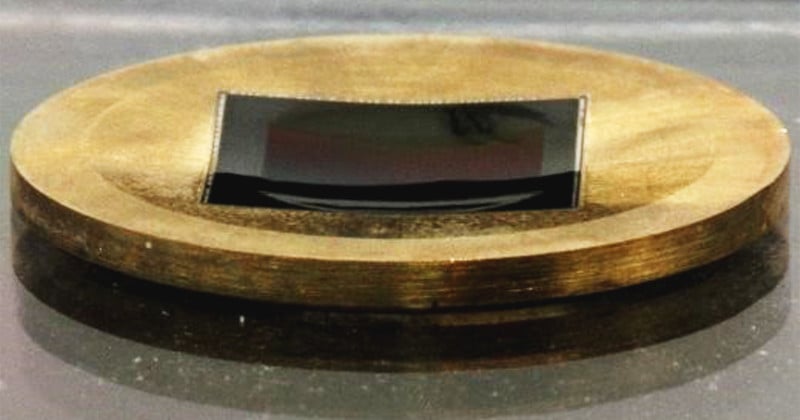 The development of curved image sensors may be the biggest advance in camera technology in decades, allowing for simpler, flatter lenses with larger apertures as well as dramatically better image quality. Canon, Nikon, and Sony are working on the technology, and now Microsoft Research has developed a sensor with three times more curvature than previously achieved.

Back in 2014, it was rumoured that Sony’s successor to the RX1 would contain a spherical sensor. While things went quiet on that front, both Nikon and Canon have filed patents for their own curved sensors, though we have yet to see one used in a consumer camera other than Sony’s odd perfume bottle-themed KW1.

The latest news coming from Microsoft is that they have dramatically improved the process of creating spherical sensors, and created a prototype camera with one incorporated. According to the researchers, the camera produced higher resolution images across the entire field of view when compared to modern high-end DSLR cameras — including the Canon 1DS Mark III.

“When using curved sensors, it is possible to correct aberrations in a much more efficient way, making it easier to create very wide-angle lenses that produce sharp images across the entire field of view or to create fast lenses that produce better images in low light,” said Neel Joshi, a member of the research team. “It is also more straightforward to make cameras that exhibit uniform illumination across the entire image.”

The process for creating the new sensors involves placing individual sensors cut from a thinned off-the-shelf CMOS image-sensor wafer in to molds, and pressing them in to form using pneumatic pressure.

Tests showed that curving the sensors did not change any of their electrical or imaging characteristics. When used in a prototype camera with a specially designed f/1.2 lens, a curved sensor exhibited a resolution more than double that of a high-end SLR camera with a similar lens. Toward the edges of the image, the curved sensor was about five times sharper than the SLR camera.

Despite the advancements in this technology, the researchers warn that consumer products featuring the curved sensors are unlikely to be available soon. They report that they are interested in working with third parties to conduct the rigorous robustness testing that is required before mass production is possible.

“Curved sensor technology is on the cusp of making a large impact on a number of scientific fields including photography […],” Microsoft Researchers write in their published paper. “[…] we have created a prototype curved sensor camera with extraordinary performance. It surpasses, and in the case of illumination uniformity far exceeds, the performance of much larger professional camera systems like the Canon 1Ds DSLR equipped with a similarly fast f/1.2 50mm lens.”

“The flexible bending process is scalable to any die size, optically precise even for fast lenses, and compatible with cost effective, large scale manufacturing processes.”

While the flurry of excitement in 2014 was proven to be premature, this breakthrough does take us a step further towards a future of greatly improved image quality, and is definitely a development to keep an eye on.

Swiss Village Bans Photos to Save You From FOMO