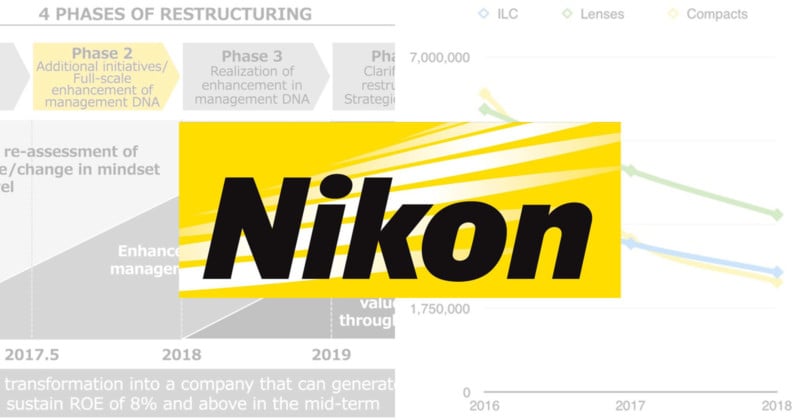 Here’s the crazy corner Nikon is in: they can claim a modest 7% increase in operating income for the fiscal year that they just finished, but had far lower net sales and, with restructuring costs, had a significant loss. Nikon predicts that they’ll recover to profitability next fiscal year, but with lower sales.

Editor’s note: You can read Nikon’s latest financial results for yourself in this presentation and on Nikon’s website.

Most interesting is the way Nikon describes their restructuring process: So at the moment, Nikon seems to be claiming that they’re still doing re-assessment of cost structures while somehow “enhancing” management. Nowhere in that so-called restructuring plan do I actually see the word “implement,” as in “begin doing what we’re talking about.” I’m sure that implementation has been active from the get go, but this plan, as presented, strikes me as too mild, too late.

I really don’t like this: “Strategic direction for year ending March 31, 2018: Target a profit-structure able to sustain profit in a declining market. Create a midterm roadmap and initiate a fundamental review of costs.” Hmm, no wonder Nikon doesn’t provide customer roadmaps: they don’t have a complete one themselves.

I’m being harsh and snarky here. In a big business like Nikon, there’s the large picture and the small picture. What we’re discussing in terms of strategy is the large picture, where Nikon seems to be saying they aren’t totally sure what they’re doing other than further reducing costs. They’ve mentioned cost reduction almost every financial disclosure for the last decade, so what exactly do they really mean by “fundamental review of costs”?

In the small picture, I’m sure Nikon is still executing. But exactly what was that execution during the fiscal year they just reported? This:

Which brings us to the ugly numbers for the Imaging group:

Yes, ugly. Canon was pretty much flat in Interchangeable Lens Camera (ILC) units and gained market share during this period, and even managed to not drop at the industry average rate in compacts.

Wondering why you’re not seeing Nikon advertising and marketing? Yep, cost cutting: “decrease [partially due to] controlling costs including advertising expense.” Indeed, Nikon clearly disclosed their basic goal in imaging: “similar profitability to prior year excluding [foreign exchange] impact.” In other words, they’re managing everything to profit levels, not market share or any other factor now.

If you’re wondering about that medical business they are trying to create: 20.2b yen in sales and -4.5b yen in operating income. To put that in perspective, that’s a smaller business than Nikon’s profit in the camera business, and the loss in medical eats about 1/6th of the Imaging business’s profits.

So what’s in store for Nikon going forward? 20b in fixed cost reductions, for one. Headcount rationalization and re-assignment. Review of all costs. Which gives us this forecast for the coming year for the Imaging group according to Nikon: 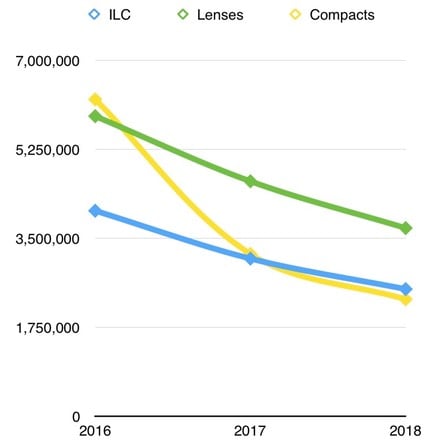 Those are bad numbers, folks. As badly as Nikon slipped in the overall market (market share decline) in the past year, they expect the same in the coming year. The duopoly is now more a monopoly. With Nikon at 23% and Canon at 48% for ILC bodies, we have a strong player and a weak player. The weak player is Nikon.

One last comment: Nikon is clearly more interested in the profit margin that you provide them than they are in terms of how many of you there are in total. But another announcement they made today makes that even more curious: they’ve revised their Shareholder Returns Policy. They used to attempt to provide a “total return ratio of 30% or more.” Now they’re targeting a “dividend payout ratio of 40% or more.” Where are customers in any of this? Apparently not squarely in management’s vision.

Nikon is managing to appease shareholders, who aren’t seeing growth in the company. Now, obviously, businesses exist to maximize profits/value to shareholders. But the way you do that is by producing products and services that appeal to customers. You can’t have one without the other. That graph just above tells you that Nikon’s products and services are becoming less appealing to customers. That’s a warning sign.

How to Build a LED Wand Light for $30