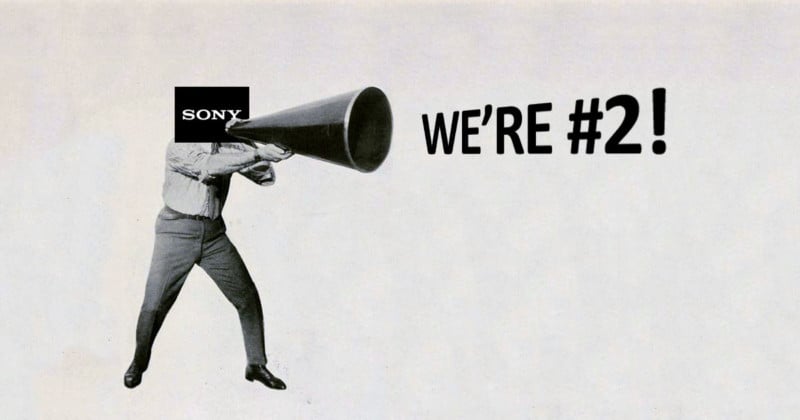 Instantly you saw commentary on this press release everywhere from DPReview to PetaPixel to all the various brand-specific sites. Cheering, jeering, and leering ensued.

Unfortunately, the devil is always in the details, and I’ve seen quite a few misstatements and guesses about what the press release means. Indeed, even within the short press release there is information that appears to be contradictory.

One common theme going around is that Sony took the #2 market share in the US from Nikon. Sony did not mention the #2 company by name, nor would you be able to know what that company was without having access to the NPD data, which is proprietary and covered by NDA. So first off, people are guessing that it’s Canon, Sony, Nikon, in that order.

The headlines that state “Sony takes #2 position from Nikon” are all guesses (though I suppose Sony might have whispered something additional to some of the bigger photography news sites). Heavens knows we have enough made up news around to try to wade through. Even if you guess right, you’re not actually writing a news story if you’re just guessing.

Second, the metric for the press release’s claim is dollars, not units. The implication is that Sony didn’t reach #2 in unit volume in the US. In other words, Sony may have sold fewer cameras, but they were more expensive is a logical conclusion you can make.

Third, the time period associated with the claim is very brief: January and February 2017 (versus same period last year). Generally the start of the year is a slow sales period. Plus it’s just one market that is cited, the US. The period in question comes immediately after NikonUSA’s big full frame promotions in November and December 2016 had ended. Remember, NPD measures from cash register receipts, so any promotions, marketing, advertising, and things that customers don’t see like spiffs to dealers, all come into play.

My observation is that NikonUSA did virtually nothing in those two months to promote camera sales, while Sony was aggressively doing so. And we’d also need to go back and look at January/February 2016 and see what was happening in the sales channels during that time to make full sense of Sony’s claims, since they’re using data from those months, as well.

Don’t get me wrong. That Sony can say that they’re that competitive and growing — even if for a short time frame for a subset of their products — shows that they are not to be ignored. But if you throw smack like this, you can probably expect to see some come right back at you.

Then we have some incorrect statements in some of the analysis some sites have made. One thing I saw in multiple places was that Sony was innovating and iterating faster. Not really for full frame. The a7 and a7R were 2013, the a7 II and a7S were 2014, the a7S II and a7R II were 2015. Six full frame cameras in three years. Nikon had the Df and D610 in 2013, the D750, D810, and D4s in 2014, or five cameras in two years (plus the minor change to make the D810A). Canon was actually the least active in full frame camera iteration during that same period.

I wrote of a contradiction within the press release. The press release states “cameras and lenses” while the NPD data cited in support is for “detachable lens camera, full frame.” So one has to wonder if we’re not seeing some loose dealing of the cards here, too.

One final point: sales dollars are generally not a great statistic to look at as predictive. The reasons that all of us analysts look mostly at unit volume is that it is more predictive of long-term success. First, there’s the implied lens sales that shipping a new camera implies. Second, there’s the likelihood of future upgrading by that customer. Unit volume over time also tells us about trajectories, and allows us to be more accurately predictive of future volume.

Okay, what to make of all this? Simplest analysis: the a7R II and a7S II sold well in January and February 2017. Both are high priced cameras, and both were pushed aggressively by Sony during the period with a number of promotions. The a7S II, though, is generally steered more towards the video shooter than the still shooter. During that period there was much discussion by outlets such as National Geographic about how the a7S II allowed them to get low-light video that they struggled to get in the past.

Still, the a7R II and a7S II sold well. Congratulations to Sony for that: getting any traction in today’s declining camera market is well worth noting and celebrating.

So let’s talk about the full frame camera market for a moment. There really are just three small groupings of product that are driving the sales numbers in the ways the camera makers want:

The 1D X II and D5 are low volume cameras (though with high profit margin), while the 6D, D610, and bottom A7 (no letter modifier) models may be higher volume, but are lower in price and profit margin. The basic trend line seems like the serious full frame enthusiast wants smaller and lighter offerings, yet with very high performance, which is favoring the top Sony A7 models a bit in that hotly contested grouping.

Curiously, both Nikon and Sony both should be updating their products in this group in coming months. Is it a hint that Nikon did their big sales promotion on those models two months earlier than Sony? Or was that just coincidence? I don’t know. I expect new D760, D850, and Sony Mark III models in the coming nine months, so we’ll see if that changes anything. As both a D810 and A7rII user myself, I’m curious as to what these companies have up their sleeve to get me to upgrade.

Note that Sony didn’t say anything about how the rest of their lineup is doing in that press release. The APS-C/DX sensor scene might not look as favorable to them, especially with Canon now pushing the EOS M successfully.

I’m also reminded of the 2007-2008 period, where Nikon wrested the full frame unit volume crown from Canon briefly. That was celebrated by Nikon (mostly in Japan), as it should be, but celebrations have this hangover problem. If you get too caught up in small victories, you might miss out on the big one. Canon certainly fought hard and got their market share back. So when Sony throws smack like this, I’m pretty sure that it fully caught both Canon’s and Nikon’s attention.

Expect a reaction. It might not happen quickly, but you don’t make statements like the one Sony did without getting a reaction from the rest of the market.

This Photo Shows Earth Framed by the Rings of Saturn

I Got a Free Haircut Using My Camera