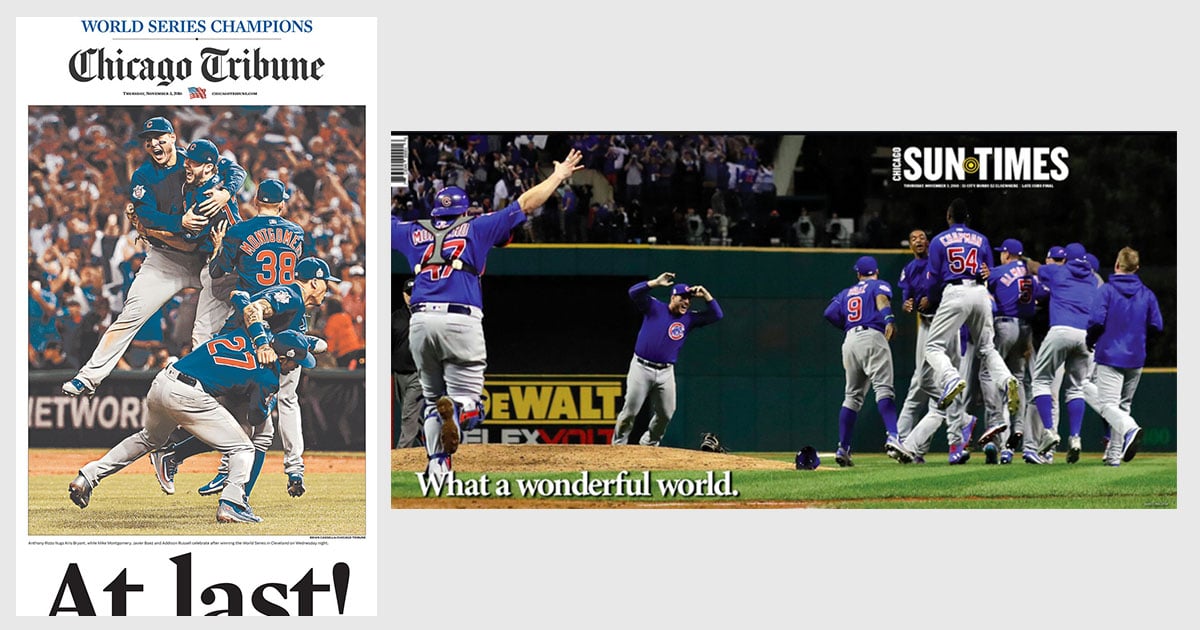 The Chicago Cubs finally won the World Series last night after 108-year drought. But what has some photojournalists talking are the cover photos published by two of Chicago’s biggest newspapers, the Chicago Tribune and the Chicago Sun-Times.

As you might remember, the Sun-Times (the 8th largest paper in the US by circulation) laid off its entire staff of photographers back in 2013 and then sent a memo to its reporters about training them in iPhone photography.

The Tribune (the 10th largest paper), on the other hand, still employs its own staff photojournalists. One of these is Brian Cassella, who shot the latest cover photo.

Perhaps due to these differing views on photography, photo industry pundits immediately began pointing out the differences in the front page photos immediately after they left the presses.

Front pages of @chicagotribune whom employ a staff of pro photographers & @Suntimes who laid off all their photogs. Iconic v Forgetable pic.twitter.com/vUZ0V1AGT8

Carson also tweeted a message to Jim Kirk, the publisher and editor-in-chief of the Sun-Times:

.@kirkjim12 too bad the @Suntimes laid off all their photogs. The @chicagotribune front page of the @Cubs is iconic, yours is front focused https://t.co/yOGeLt2yE8

Then the discussion about who’s at fault began:

@telkinsjr @chicagotribune @Suntimes I understand that point, but a photog could've guided their decision, if they had any

By the way, the exact same discussion erupted back in June 2013 after the Chicago Blackhawks won the Stanley Cup Finals in hockey. Here’s what those cover photos looked like: The Wildlife Photographer Who Shoots in England’s Urban Jungle

Folio.ink is a Free Photo Gallery Platform That Doesn’t Require a Login