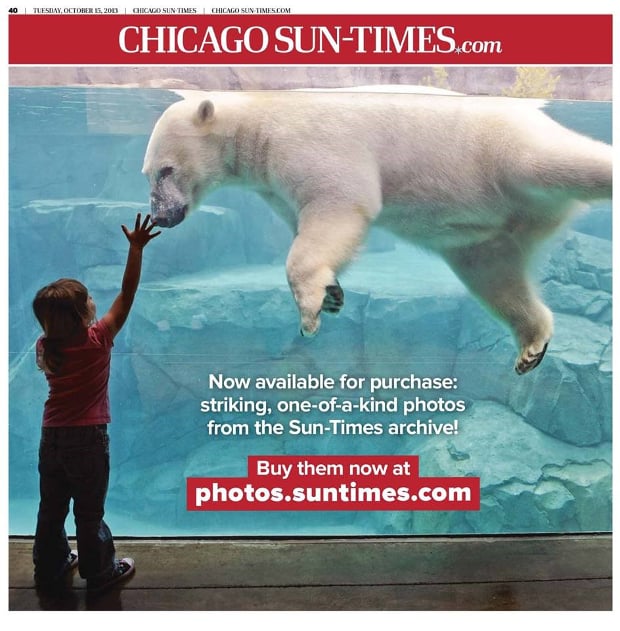 In a move that is completely legal and yet already has some people wondering just how much bad press the Chicago Sun-Times is looking to absorb, the beleaguered newspaper is putting the ‘striking, one-of-a-kind photos’ in its archive up for sale… you know, photos taken by the photojournalists the paper sacked in May of this year.

The advertisement appeared in today’s paper and was pointed out by journalist Jim Romenesko on his blog, where he also got former Sun-Times photographer Rob Hart to comment on the development.

Hart, for his part, was surprisingly nonchalant about the whole thing. “They trusted me to go out in the community and find great stories and compelling images that are worth something and I can’t fault them for wanting the world to see our images,” said Hart. “John H. White taught us to be like the lightning bug and never let anyone contain our light. We don’t take photos to put them in a box.”

The photographic community at large, however, sees this as adding insult to injury. First you lay off your entire photo staff, and then you begin selling the photos those same photographers took while in your employ, admitting that they are ‘striking’ and ‘one-of-a-kind’? We’ll let you find the correct adjective to describe this one.

The Chicago Newspaper Guild — who told Romenesko “it’s a shame that these archives aren’t getting any recent additions since there are no longer any photojournalists on staff,” — is currently trying to force the Sun-Times to reinstate its photographers.

But even if they manage to legally force the newspaper’s hand, it seems not everybody will want to go back. “It’s been almost 5 months since I’ve had to say ‘I’m sorry we’re doing the best with what we have,’ everyday,” Hart tells Romenesko. “So thanks Michael Ferro!”

First Leaked Photos of the Tiny Panasonic GM1, The ‘Smallest ILC Camera Ever’

Sony Unveils the a7 and a7R, E-Mount ILCs that Pack a Full-Frame Punch