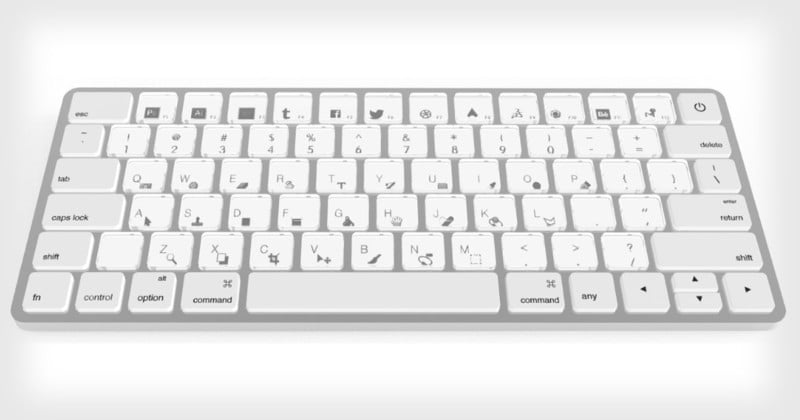 There are stickers and covers out there that can overlay Photoshop shortcut icons over your keyboard, but those may soon be unnecessary. Apple is reportedly interested in the dynamic E Ink keyboard created by Sonder, a keyboard that can instantly change what’s displayed on each of the keys.

9to5Mac reports that Apple is in talks with Sonder, an Australian startup in Foxconn’s incubator program, regarding dynamic keyboard technology.

This is what the dynamic keyboard looks like in action — as you can see, the design is sleek, minimalist, and reminiscent of Apple’s aesthetic:

PetaPixel was contacted by the same tipster as 9to5Mac over a week ago, and the source tells us that the technology was being shown off at a demo day on the Tsinghua University campus in China.

“They make a smart keyboard called the Sonder keyboard which is super neat for Photoshop editing and swapping between languages,” the source tells PetaPixel. “The Foxconn Executive said Apple’s Procurement Board Office was in the process of buying or acquiring the company[…]”

“[Sonder’s] main product was a laptop keyboard module they were doing for two of Foxconn’s customers,” the source continues. “They didn’t disclose if it was Apple but I think the other was Lenovo.”

9to5Mac has confirmed with Sonder that the startup has been in negotiations with Apple.

If the E Ink technology — the same tech used in Amazon Kindle e-reader screens — does one day make it onto an Apple keyboard, you’ll be able to instantly switch between different layouts depending on what program (or language) you’re using. Editing in Photoshop? The keys could be instantly switched to display the icons of each photo editing tool shortcut.

These Photos Reveal the Guts of Those Massive Cooling Towers