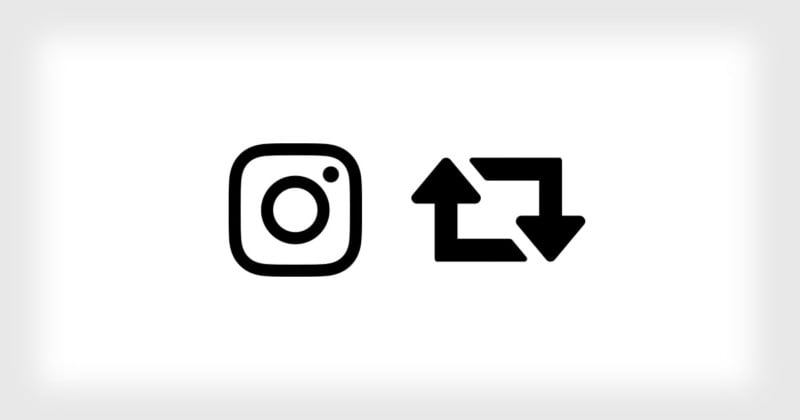 Hands up, who here uses hashtags? Trick question. Of course you do. We all do. And if you don’t, you should.

Let me clarify; I’m not talking about those pointless, broad, bot-magnet hashtags, like #green #ocean or #tbt. I’m talking about the useful ones. Hashtags created by a feature account or brand that’s looking for interesting images on a specific topic to re-share with their much larger audience. For example @Australia, the Instagram account curated by Tourism Australia that showcases wanderlustful images from around the country to their millions of followers. Or the hub @NightPhotography, which shares the best photos, you guessed it, taken after dark, to a niche community of people who like images of night timey stuff. 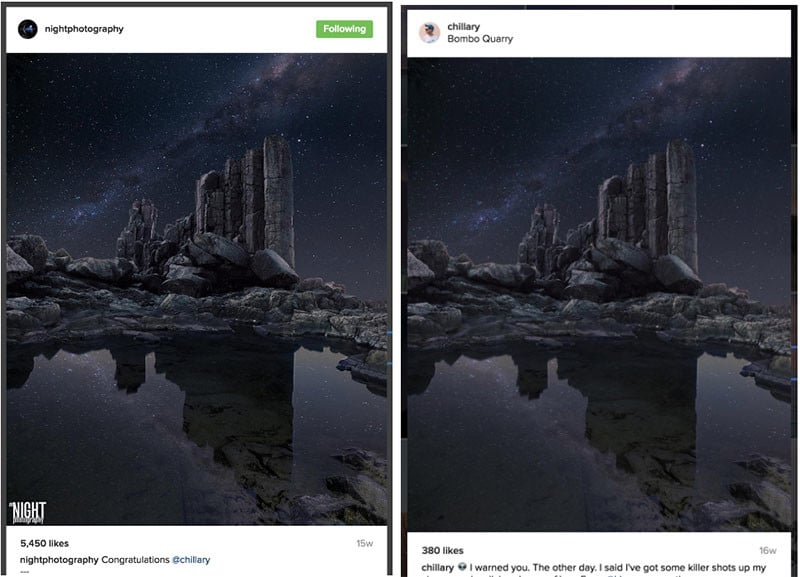 As photographers, we have a symbiotic relationship with these hubs and brands. They need us to constantly create content in order to feed their flock. We need them to spread our work to that larger audience. They don’t pay us for the right to use our work. Instead, we use their hashtags and in doing so, hand over the right to a repost.

They tag us in the comments and we wait by the phone in the hope of gaining some trickle-down followers. It’s been trucking along like this since the beginning. Instagram encouraged this behavior by creating the #WHP. But continuing on this way is a problem, because this method is becoming increasingly less effective as users quickly double tap and scroll on.

It’s been documented that our engagement rates have fallen off a cliff this past year. I’ve felt it. This time 18 months ago, I was averaging over 1,000 likes a post. Now, I’ll be lucky to get 200 on a good day. It’s not like I’m running my account on autopilot. This year I’ve put in the work, been featured on a bunch of hubs, gained handfuls of likes in the process and yet slowly, the numbers continue to dwindle. You’re right, it’s probably due to that fun Facebook algorithm that everybody loves. And yes, boo hoo, that’s enough about poor widdle me, this is about us. Because you’ve probably been experiencing something similar. 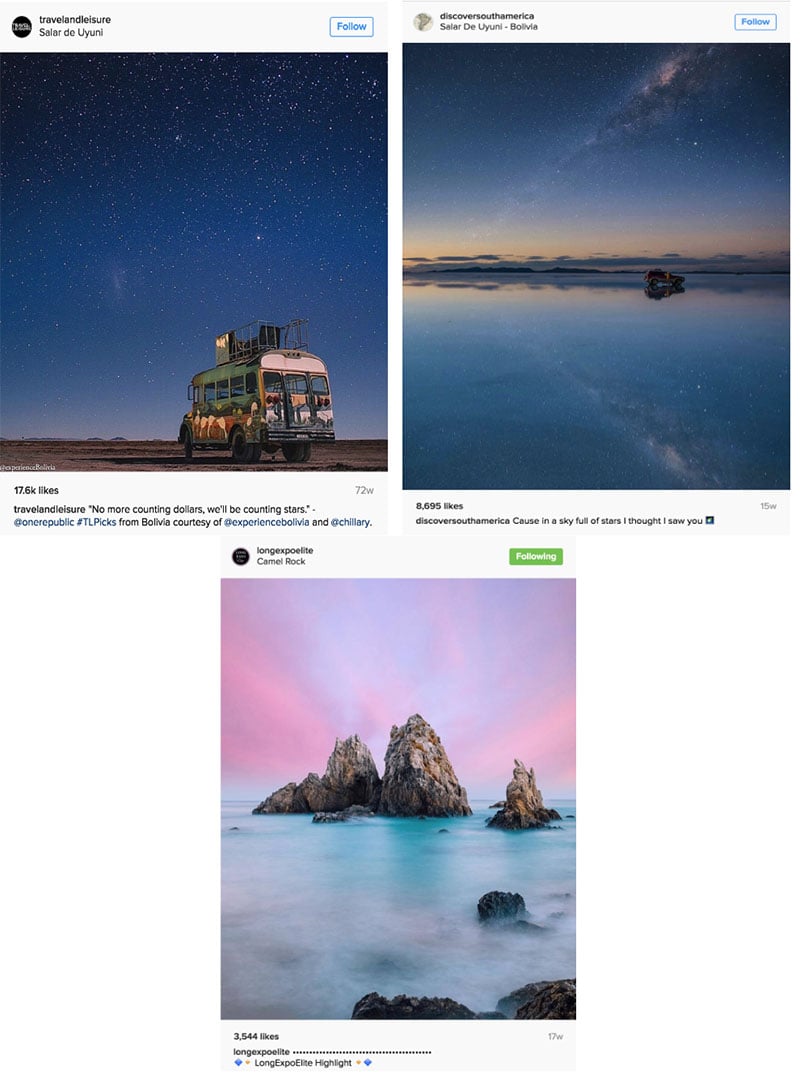 That’s why I think it’s time for Instagram to gift us with a regram button. We’ve been retweeting since ’09. Reblogging for almost a decade. And reposting that band you’ve probably never heard of on Soundcloud for eons. Even Instagram’s big brother, Facebook, joined the trend over 4 years ago. This is just how we Internet in 2016.

So where’s the regram button?

Reposting, as we’ve outlined above, is already integral to the way people use the social platform. So adding a regram feature doesn’t mess with how we use the service. Really, all it would be doing is making it easier for users who behave that way, to continue behaving that way. Except that with a regram, the likes would be attributed to the original content creator — yeah, that’s me and you!

Let’s role play it. Say @Australia regrams your post, and it gets, I don’t know, roughly 60,000 likes… your original post would also be attributed those likes. Instead of the mediocre 438 likes you actually got. And when other feature accounts continue to regram, those numbers keep stacking up. A hundred extra here. A couple thou’ over there. All of sudden the likes are flooding in. You’re drowning in likes, baby! 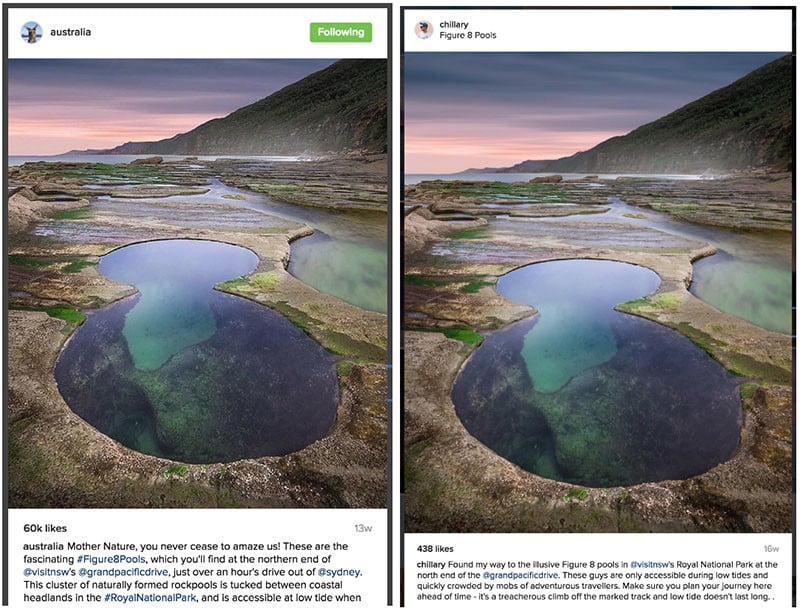 This scenario is too good to be true, right? Surely someone loses out. Well, let’s check our three C’s. Nothing changes for the Consumer. They still see the image and like it. Nothing changes for the Curator. They still cherry pick the best content for their audience and still get the likes. Businesses can do the same – in fact, it makes life easier for the Social Media Managers of the world (you’re welcome). And as for us, the Creators, it changes a few things.

First up, the kudos! See above. Next, the end of purple-monkey-dishwasher mis-attribution.

No more seeing your work accompanied by the heartbreaking caption ‘photographer unknown’. There’s also the image quality factor – instead of hubs screenshotting and reposting a poorer quality version, or using one of those apps, it’s your original high-ish-res image all the way. And finally, it could kick your engagement up a notch. Okay, I can’t prove that. Nobody knows how the algorithm thinks. But wouldn’t that be nice.

Do you need a little help visualising how this whole regram thing would work? Here:

I’m not a designer, but if you’re reading this, Instagram Design Team, you could start with the existing ‘send to’ button.

Okay, now that you’re completely sold on the idea, I guess we should talk about some potential negative outcomes. There are privacy issues that will need to be taken into consideration. Perhaps users are required to turn on a ‘require permission for regram’ function. And for those who don’t want their work to be anywhere but their profile, we’ll make this whole thing opt-in. Easy. Next.

Ah, the big one. How do you choose who can and who cannot regram your work? What happens when a politician’s son with opposing ideals repurposes your image with a few swift taps and a hate-filled caption? Your image. Their words. It’s not great. And I don’t have an answer for you. I guess I’ll just clean my hands of this and leave it to our friends in Silicon Valley to work through.

About the author: Chris Hillary is a Melbourne-based photographer, part-time copywriter, and full time gypsy. The opinions expressed in this article are solely those of the author. You can find him on Instagram as @chillary.

Photos: Dazzling Auroras Light Up the Sky Over Iceland