Instagram boasts over 400 million users now and has never been more popular. But even though user growth charges forward, the interaction rate by users appears to be trending downward. A new study reports a 33% drop in Likes and Comments over a one year period.


This detail was discovered through a study conducted by social media analytics firm Quintly, which writes that the “total amount of interactions [is] on a steep drop.” 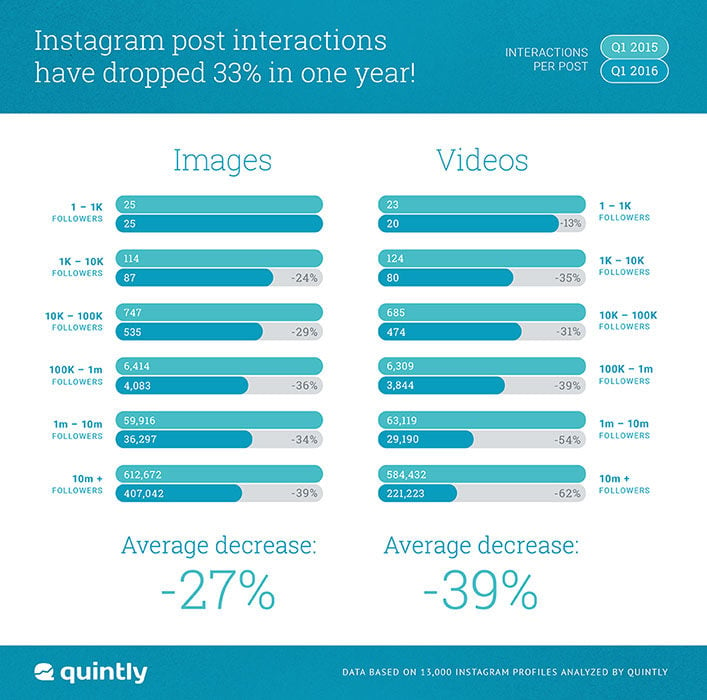 One reason for this change may be cluttered timelines: as the service continues to expand with more and more celebrities and companies on it, and as users follow more and more accounts, their timelines are becoming increasingly cluttered.

“[T]he individual user has more content in his or her timeline but is not necessarily eager to interact more as he did one year ago,” writes Quintly. “Thus, the average interaction on each post decreases.”

Another reason may be the increasingly commercial nature of Instagram, which is seeking to make huge profits from lucrative ads. The appearance of more businesses and ads could alienate users, Quintly says, “which results in less interactions as well.”

To make sure your followers interact with your posts, try to “be as authentic as possible,” suggests Quintly. Whether you’re posting photos as an individual photographer or as a brand, it helps to have your content feel more personal, warm, and friendly — like something “posted by a ‘good friend’.”

It’ll also be interesting to see how Instagram’s new change from a chronological timeline to an algorithm-powered one will affect interaction rates.

(via Quintly via Quartz)