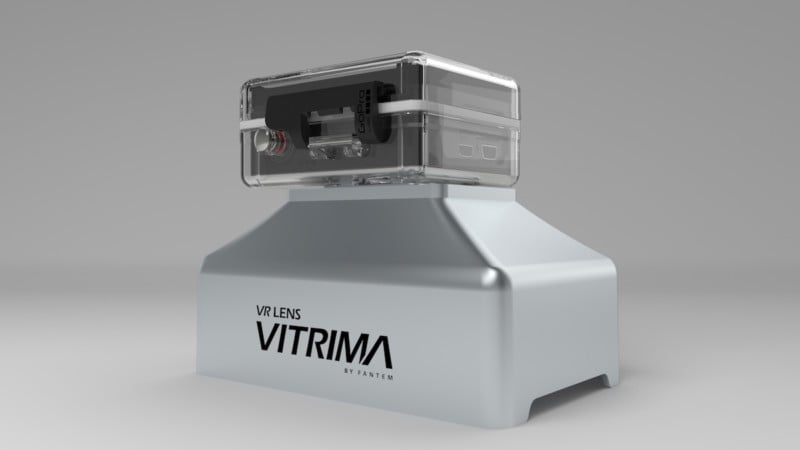 If you want to capture 3D with your GoPro camera without dropping hundreds of dollars on an extra Hero camera and a 3D housing, then you definitely need to check out the soon-to-be-released Vitrima 3D lens.

This mirrored lens design should look familiar to anybody who has been following PetaPixel for a bit, because it’s basically the same thing as the old Stereax we featured a few weeks back. Rather than using two separate cameras to capture two images that can be merged into a 3D whole, the Vitrima is an attachment that uses mirrors to capture two images on a single camera.

The upside of this approach is that footage captured with the Vitrima attached to your GoPro is instantly viewable on a VR headset—no editing, no nothing, just hit play. The downside is that you can’t view it in 2D… you’re stuck watching two nearly identical videos on one screen. Here’s some sample footage captured with a Vitrima 3D prototype:

The Vitrima is extremely easy to use: you simply pop your GoPro Hero camera into the standard housing attached to the lens and you’re good to go. The whole setup is waterproof, and since you’re using a normal GoPro housing it’s ready to mount using any of the many accessories already available out there.

But the best part of this deal is how affordable it is. If you buy the Vitrima 3D on day one of its launch, you’ll get it for just $50. No word yet on an exact launch date, but the release should happen sometime mid-June, and you can sign up to get an email notification on the company’s website.

Here’s a closer look at the lens from all angles:

As VR headsets get more and more ubiquitous, everybody is releasing 3D cameras and 360° cameras and other nifty creations to help you take advantage of the technology, but many of those products cost hundreds upon hundreds of dollars.

The Vitrima 3D lens promises to be a fun, affordable alternative for those of us who would love to capture a fun experience or two in 3D and relive it on Google Cardboard without dropping a bunch of cash for the privilege.

To learn more about the Vitrima 3D lens or sign up to be notified when it goes live, click here.