Inspired by the 360º panoramic images that turn the world around us into a little planet of its own, German photographer Jonas Ginter wanted to step it up. And so he decided to use video rather than just a still image.

Ginter spent two years experimenting with various setups in an attempt to get the results he was looking for. In 24 months he tried everything from an elaborate mirror setup to screwing a camera on a turn-table, but to no avail. Eventually, Ginter had a bit of an epiphany: he realized that the only way he could truly capture a 360º video scene is by capturing every single angle at once. 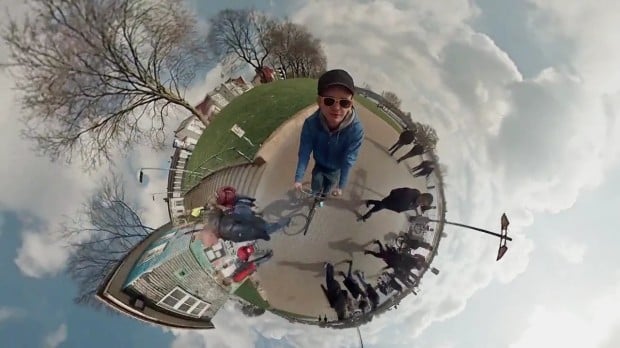 So, with the help of a 3D printer and a half-dozen GoPro Hero 3s, Ginter created a 3D printed mount that holds the six GoPro cameras side-by-side to create enough overlapping footage to pull out a full 360º viewing angle.

As you can see in the video above, the result is rather trippy, especially considering his music of choice. Give the 67 second video a watch and be prepared to have the urge to go out and purchase $2,400 in GoPros and find yourself a 3D printer… or check out 360Heros if you don’t have a 3D printer but you DO want to spend even more cash.

(via Gizmodo via The Phoblographer)

I Sing of OLAF: Lensrentals Names Its New Gizmo, May Offer Optical Testing for Cheap