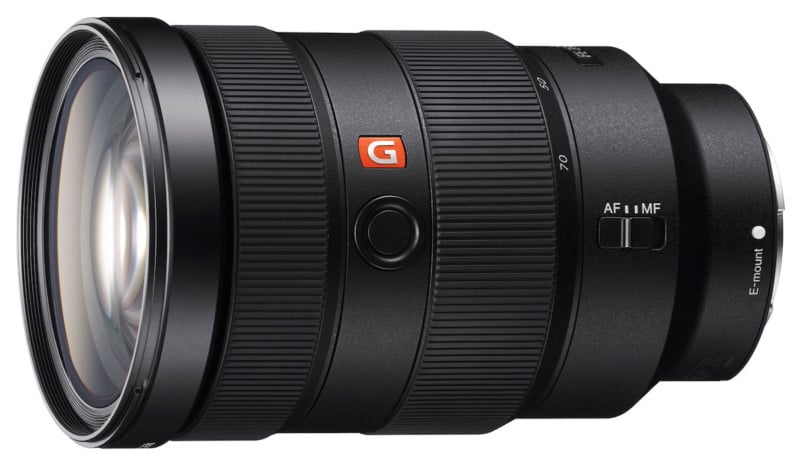 I was one of those who noted Sony had some troubles, as manufacturers often do, with some of their first generation lenses for full-frame FE mount cameras. When they announced the G Master lens series I was really excited to test them.

I was expecting Sony to have made progress both with optical quality and with copy-to-copy variation. I wasn’t sure that they’d be as good as the best lenses coming from the long-term photo manufacturers, but I did expect they would be close.

A Note About Sony MTF Testing

As I discussed in our post about the 70-200mm f/4 lenses, our testing algorithms and presentations are changing as we improve things and try to make them more scientific. If you missed that there are two major points.

First, the variation algorithms are different, both to make the charts easier to see (we show a 1 Standard Deviation range, rather than the 1.5 S. D. we used to) and to eliminate the Consistency Number. We found that the Consistency Number was too blunt of a tool; it showed only one limited part of variation. There were cases when there were two lenses had the same consistency score, but one was quite a bit worse than the other in ways the number didn’t show.

Second, I want to continue to point out that the MTF bench is not designed to test lenses that require power to maintain focus position, which FE lenses do. We’ve worked around that by making an electrically live mount, but the electronics block some of the test points at 20mm from the center (the right side of the graph). For that reason, the measurements at the edge have fewer measured points than the other points tested. Take them with a mild grain of salt.

Finally, one note about this test. We found that the 24-70mm f/2.8 GM lens performed best with 2mm of optical glass placed in the pathway, simulating the cover glass of a camera sensor. This is of NO significance to persons shooting with the lens, but I mention it for completeness sake. We check every lens we test with and without glass in the optical pathway and present the best MTF results.

We tested 10 copies of the lens at 24mm, 35mm, and 70mm focal lengths. I’ll print the results full size first because sometimes it’s hard to see the smaller comparison charts. 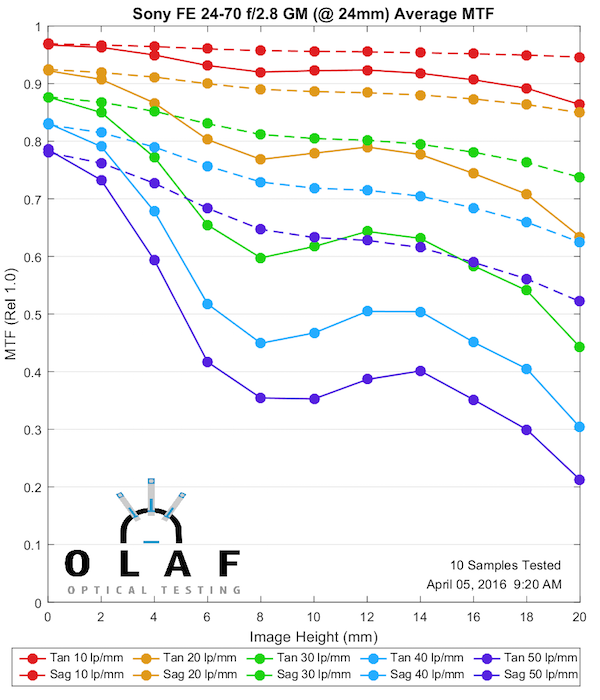 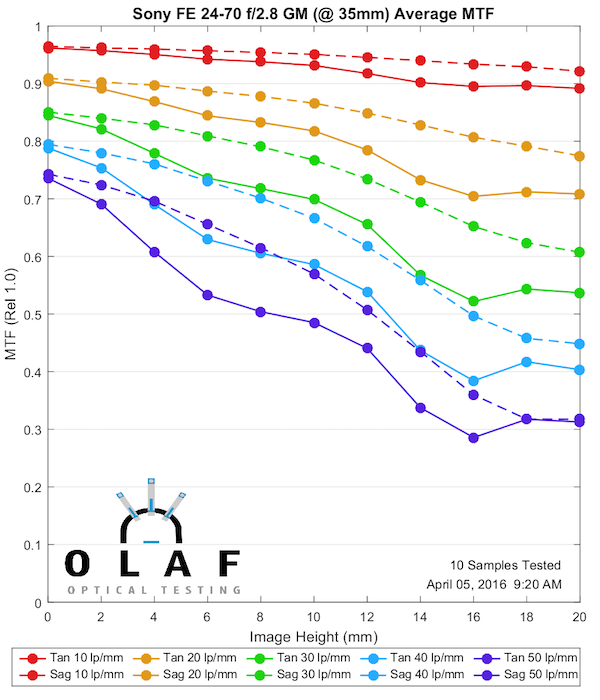 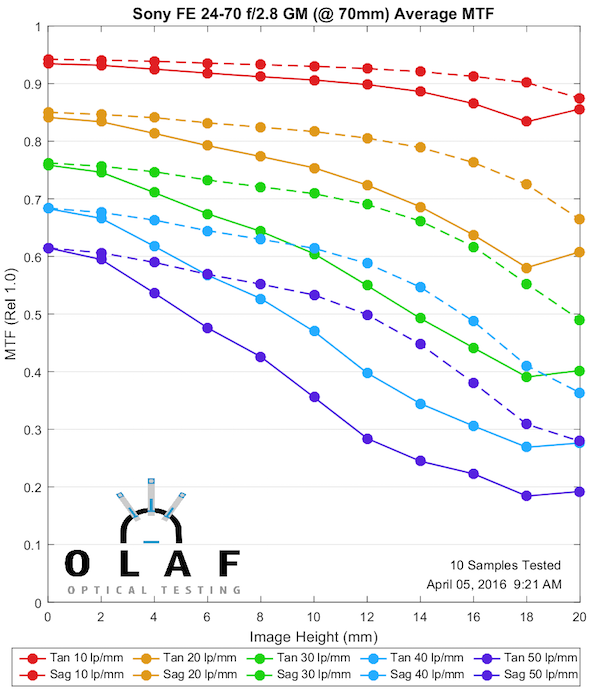 These are really impressive MTF curves with excellent resolution, but it’s always helpful to compare things a bit, so below are side-by-side comparisons with the Canon 24-70mm f/2.8 Mk II and Nikon 24-70 f/2.8 AF-S VR lenses. First, we’ll compare the MTFs at 24mm.

I know the graphs are a bit small (click them for larger), but it should still be apparent that the Sony is at least as good as the other two lenses. It actually has the best center resolution, particularly at higher frequencies, which backs up Sony’s statement that this lens was designed with high-resolution sensors in mind.

Off-axis, it maintains good sharpness to the edge of the field, although it does have a bit more astigmatism or lateral color (it’s not possible to differentiate the two on a single-aperture MTF test). All three of these are excellent lenses at 24mm. The Sony might be a hair better, but it’s a pretty minor hair.

The 70mm end of 24-70mm zooms tends to be the weaker end, so we’ll do the same comparison there.

None of these lenses are quite as strong at 70mm as they were at the wider portion of the zoom range. Again, the Sony is at least as good as the others. It has, by a tiny hair, the best center resolution, and while it isn’t quite as flat across the image as the Nikon, it is better in that regard than the Canon. It does have just a bit more astigmatism/lateral color on the MTF bench, though.

Fanboys can split hairs about which lens is best if they need to, but really all three of these are excellent lenses with only minor differences between them.

This was the part of testing that I was most interested in since we’ve seen a few Sony FE lenses that had pretty large copy-to-copy variation.

I’ll remind you again that the variance algorithms are different now, so for comparison, I’ve redone the variance graphs using the raw data from the Canon and Nikon 24-70 lenses, too. Both of them we consider pretty good, with a reasonable amount of variation for zoom lenses.

To my surprise and pleasure, the variation of the Sony G Master lenses at 24mm is at least as low as, and perhaps a bit better than, the Canon and Nikon zooms, both of which we consider good for zooms.

We knew that both the Canon and Nikon lenses had more variation at 70mm than at 24mm, so we expected the Sony would, too.

Like the Canon and Nikon, the Sony did have more variation at 70mm. But the Sony doesn’t worsen more than the others, they all end up fairly similar.

As an aside, we also checked variance in the middle of the zoom range and the Sony was really quite good there. In other words, if your copy has problems, it will almost certainly be at 70mm, but if you buy a Sony 24-70mm f/2.8 you are no more likely to have an issue than you would with a Canon or Nikon.

When the Canon 24-70 f/2.8 Mk II came out a couple of years ago, I hailed it as dramatically better than what had ever been available in this range. Sony FE shooters now have its equal in a native-mount lens.

Sure, the fanboys can split hairs about this or that, but the differences in the lenses themselves are tiny. Of course, the proof is in the image, but early reports from reviewers seem to agree the new Sony performs just as well in the field as it does on the MTF bench. Well done, Sony!

About the author: Roger Cicala is the founder of LensRentals, one of the top camera gear rental companies. This article was also published here.