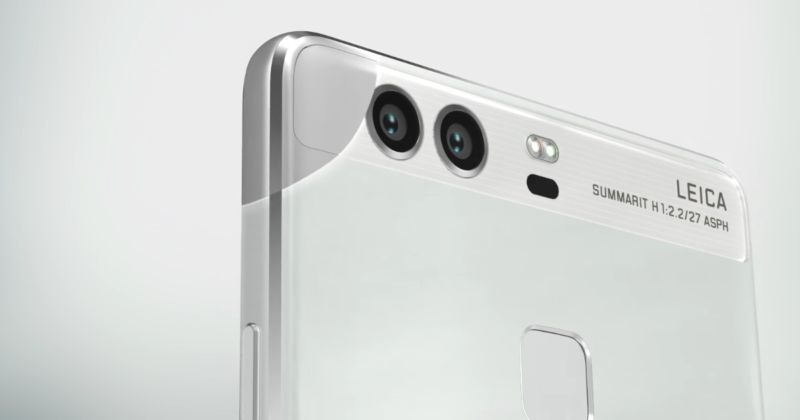 It’s been a little over a month since Leica promised to “reinvent” mobile photography in partnership with Chinese smartphone manufacturer Huawei, and today they’re following up on that promise. The long-awaited, much-rumored, and much-leaked Huawei P9 has arrived.

The P9 is Huawei’s new flagship phone, and the crown jewel (or jewels, in this case) of the phone are obviously its dual, Leica-branded cameras. Both are 12 megapixels, with one shooting color and the other monochrome. Together, the two sensors supposedly improve contrast by a whopping 50 percent, and increase the amount of light the camera can detect by 300 percent.

These are big claims, but Huawei is sticking to them and then some.

“Huawei is excited to give P9 users the best smartphone photography experience by leveraging the unrivaled capabilities of Leica, the leader in the world of imaging for more than 100 years,” says CEO Richard Yu. “P9 users can now capture images with unmatched clarity, richness and authenticity, with a masterfully designed and powerful smartphone that looks and feels incredible.”

It’s important to note that neither Huawei nor Leica are being entirely forthcoming about the details of this partnership. The video above is about as detailed as we get. The term “co-engineered” comes up a lot, and the cameras are said to “fully unleash the power of Leica’s optical lenses,” but there’s little to no real indication that Leica manufactured these lenses or any other part of the camera.

For now, know that Leica’s debut into smartphones comes in the form of two 24mm f/2.2 Summarit ASPH lenses that are part of an ongoing partnership both brands seem to be very excited about.

“[This] is a long term collaboration,” says Leica CEO Oliver Kaltner. “So it’s not a single product, it’s a journey that we are starting … to really achieve better results in photography.”

“In the future,” picks Huawei’s Richard Yu, “all Huawei flagship phones will have Leica camera technology.”

Whatever “co-engineered” means exactly, Leica’s fingerprints are all over this camera. The phone’s camera app was designed with their help, and includes a “pro” mode that gives you full control of the camera settings, as well as several Leica color profiles.

The hybrid focus system is “laser assisted,” which means it uses laser, depth calculation, and contrast to nail focus in the best possible way given the shooting situation. And since you’re using dual cameras, you can, of course, control focus and depth of field after the fact.

And, of course, you’ve got a front-facing camera as well for those all-important selfies. This one is 8MP strong and features a “super low-light selfie” mode.

While the term “co-engineered” gives us a bit of pause, this is still exciting news for smartphone photography enthusiasts. If you’ve been wishing for a major camera manufacturer to flex their imaging muscle in this space, your wish has been granted.

Or, as Leica’s Kaltner put it:

Leica and Huawei share an uncompromising commitment to imaging excellence, and our partnership will put outstanding photography into the hands of more consumers around the world. We are deepening our collaboration to give users a more optimal smartphone photography experience.

The Huawei P9 will arrive in P9 and P9 Plus versions starting later this month, but don’t expect to see it yet if you live in the United States. Maybe later this year, according to previous statements made by Huawei themselves, but nothing is confirmed.

UPDATE: Click here to see some of the first sample photos taken with the Huawei P9.

Photographer Says ‘Maniac’ Ran Over His Gear with a Truck