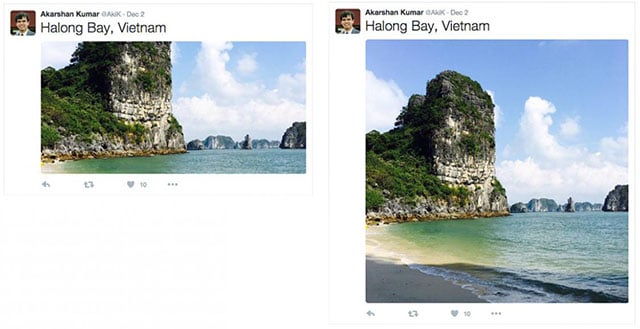 Back in August, Instagram made a lot of photographers very happy by announcing that it will no longer force all photos into a square aspect ratio — by allowing rectangular images, photographers can now share their photos in their original form.

Now Twitter is following suit: the company is announcing that photos in Twitter timelines will no longer be cropped.

“While Twitter began as an all-text platform, rich media has become essential to the experience,” Twitter says. “Some of the best moments on Twitter are when you see the world through someone else’s eyes.”

The company shares these three moments as examples of how amazing photos are being shared through its service:

Starting yesterday, photos on twitter show up in the aspect ratio they’re meant to be viewed in. What’s more, multi-photo displays have now been redesigned to be larger and more beautiful, drawing more attention to the imagery:

Twitter’s stock has been struggling as of late, and the company recently brought back founder Jack Dorsey to take over as CEO. Facebook and Instagram are dominating the social photo sharing game, and Instagram is exploding in usage and money-making potential, so now it appears that Twitter is trying to figure out how to place catch-up to stay relevant in the world of photos.