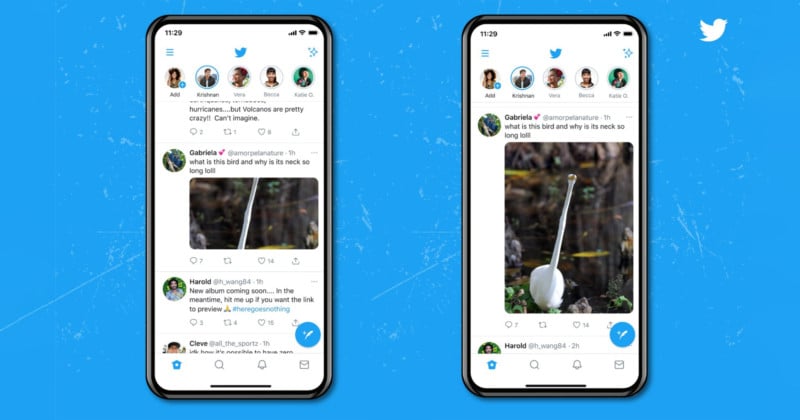 Twitter made its platform more photo-friendly last spring when it did away with cropping of images in feeds, but strangely this feature did not come to the web. That changes today, as full-size images are now supported across all platforms.

In May, Twitter stopped its process of automatically cropping photos on mobile to fit within a square. While images can appear slightly cropped, it is minor and does not take away from the value of portrait-oriented photos like the previous method did. Strangely, the company did not push this update to the web at the same time, and those who enjoy Twitter from their computer have not had the same visual experience.

That changes today, as Twitter has pushed an update that allows images to display in full as they do on mobile.

This is now available on web!

Pic looking good in the Tweet composer? That’s how it will look on the timeline.

Twitter originally cropped all non-16:9 images to maintain uniformity on timelines, but has since changed its stance on how it wants its platform to appear especially when it comes to supporting artists. While Instagram likely remains the premiere service for photo-sharing, Twitter has a strong community particularly among painters, sketch artists, and cosplayers. Given Instagram’s shift in direction and public statements that it wants to move away from being a photo-sharing platform, Twitter’s recent changes make a strong case to migrate away from the Facebook-owned (now Meta-owned) social media company.

Twitter has made several changes to how it displays images this past year. It recently updated its mobile apps to support 4K photo content, increasing the default of 2,048 x 2,048 pixels maximum to allowing for 3,840 pixels on the long end, almost double. The social media company also recently began testing full-width tweets in timelines so that photos, videos, and gifs take more of a center stage. It’s not clear if Twitter was happy with the results of that test, and the company hasn’t indicated if that feature will roll out to the wider user base.

Recent changes to Twitter have been coming to its apps well before rollout to the web, and the six-month span between the rollout of the full-size photo feature between the two platforms was significant. Still, photographers will likely be happy to see the format supported on all platforms.