Editor’s note: This review is by photographer Tim Dodd. You can follow him on Instagram at @timdoddphotography. 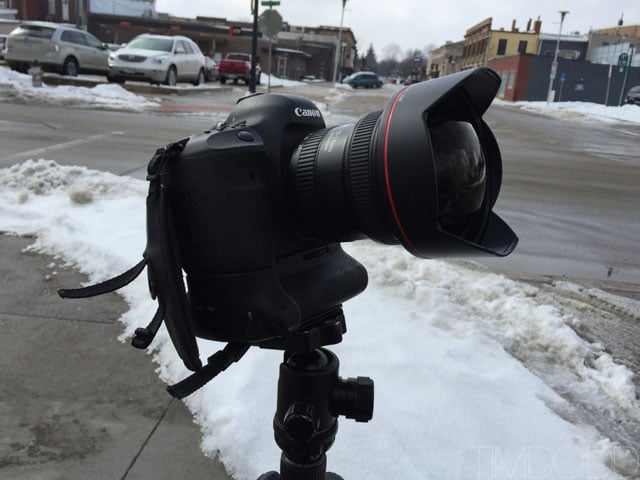 I keep meaning to post reviews about my gear. I’ve been lucky enough to shoot for years with some of the best lenses in the world. I hold strong opinions on them and rarely do those opinions make it beyond my own inner dialogue.

This time I’m doing it right away. This morning, March 3rd, 2015, I got that ever exciting knock on the door from my FedEx guy. In his hands was a much bigger box than I had envisioned. What lies within it was Canon’s newest drool-worthy lens, the 11-24mm F4L.

Quick note: I’m not here to give you the exact technical run down, I’m going to tell you what my thoughts as a working professional are on this lens. I will interject my opinions on when to use it and how I see myself using it here forth. If you’re looking for MTF charts and barrel distortion tests, you won’t find it here. If you want to see REAL LIFE examples when using this lens compared to the Canon 14mm F2.8L and the 24mm F1.4L, you’re right at home, read on. 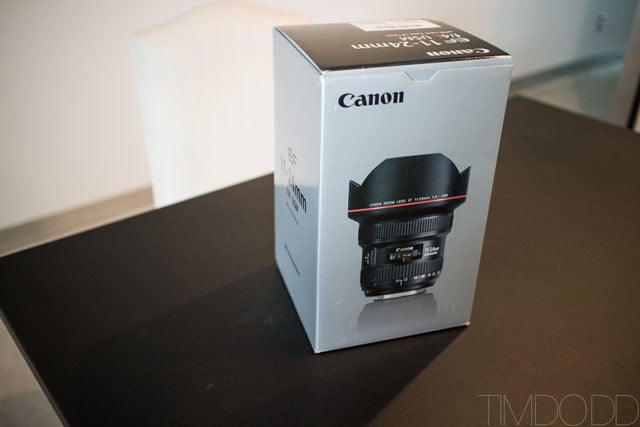 Immediately, I was stunned by the sheer size of the box. There’s no way a lens with a maximum focal length of 24mm’s could take up this big of a box… right?

Lo and behold this thing is just simply a beast. It dwarfs other L lenses of similar focal length in both weight and overall size. According to Canon, the weight is 2.6 pounds (1.18 Kg). That is almost double the weight of the Canon 14mm F2.8L, which weighs in at 1.42 (645 grams). As a matter of fact, it weighs nearly the same as the two lens I was hoping to replace in my bag when doing travel photography, the 14mm F2.8L and the 24mm F1.4L.

About that weight and size, it feels great. My 5D MK III feels well weighted and the lens fits great in your hands. It’s a little more front heavy than you’d expect, probably due to that massive front element. 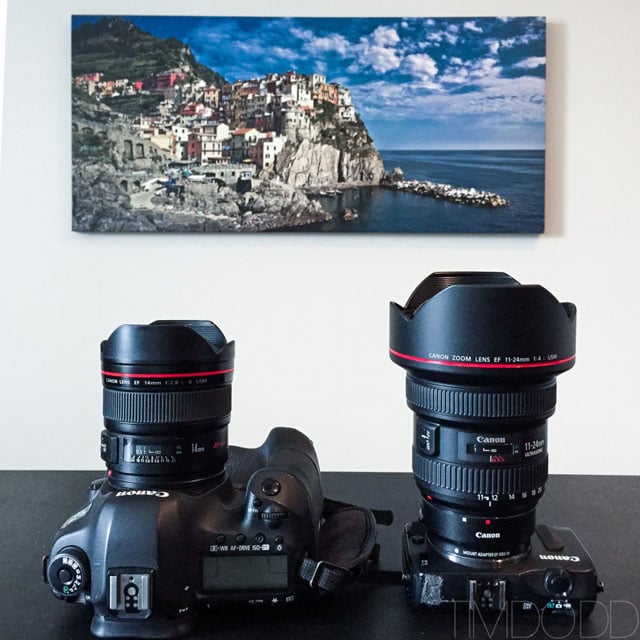 Putting the 11-24 on a Canon EOS M is a hilarious proposition. As you can see in the above picture, the 14mm (which used to look huge) now looks comically small. The 11-24 feels proportional (although massive) on the 5D MK III but it looks downright silly on the EOS M.

The zoom ring and focus ring are EXTRA tight, which I LOVE. Knowing how the tightness wears out after a few years of good use, the tighter it is day 1, the better for me. It leads to easy liveview focusing when you’re trotting around trying to dial in focus perfectly.

Autofocus is your typical Ultrasonic motor fast. Nothing extra spectacular here, but first impressions it seems to nail focus much more accurately than the 14mm F2.8L, which you’ll see in a few upcoming examples (click for full-res JPEG versions).

So what does 14mm actually look like compared to 11mm? Let’s see…

So, the 14mm appears to out resolve the 11-24mm in the corners, but how about the center. To be honest, this could’ve been down to my manual focus abilities in liveview. Regardless, let’s peek at the center.

Again, to be honest, this could be down to my manual focus abilities, but they both appear pretty excellent in the center. The 11-24 does an excellent job of controlling fringing/chromatic aberration. You can clearly see in the railings against the white sky a lack of any additional color on the edges.

How about compared to my truest work horse, the 24mm F1.4L II? It can’t possibly hold up against one of Canon’s sharpest lenses, can it?

Before we move onto the crops of these two photos, notice the 24mm F1.4L appears to have a little more barrel distortion compared to the 11-24. I’m very surprised by this. Canon seems to have tamed the distortion very well on the zoom.

So, it seems to really fare well against two of Canon’s best wide angle primes, the 24mm F1.4L II and the 14mm F2.8L II. This is important when I consider packing a bag for a two week travel to Europe. My biggest fear would be compromising image quality for an all in one solution. When I’m doing travel photography, F stop is less relevant than portrait/event photography. I use a tripod often, and I can hold the shutter open long enough that the F4 doesn’t phase me as much. Knowing the extra “legs” the lens has with its 11mm focal length is worth the drops in F stops. It’s something I can’t achieve elsewhere.

Notice the 11mm is so wide, it’s even getting the edge of the building I’m standing NEXT to! I did not expect to see that building in my shot. It’s insanely wide. So wide, it will be impossible to get people out of your shot sometimes.

Due to the cloud movement, we have to ignore exposure a little bit. BUT, the 11mm still appears to have a decent amount of vignetting visible. Luckily for us, vignetting is easy to fix, and sometimes a little desirable. Once Canon has a lens profile for this lens, they’ll be able to fix the inherit vignette so you don’t have to even worry about it in post.

Another side note is all of these shots were using autofocus on the same point (just above the center). This was to show how accurate the autofocus was right out of the box. I’ve tried to dial in the 14mm F2.8L II many times and have always struggled with beyond 20 feet accuracy. It looks like the 11-24 hit focus much better than the 14mm.

So to sum up. Canon has produced a lens that’s as sharp or sharper than its prime counterparts, although slower (F stop wise). It has chromatic aberration well under control as well as distortion. Vignetting is probably it’s biggest fault but that’s probably the easiest thing to have fixed in post, so I’m not shaken by that.

It’s a heavy, big lens that might be intimidating to some. It’s very front heavy, so heavy in fact it fell out of my shoulder bag already… 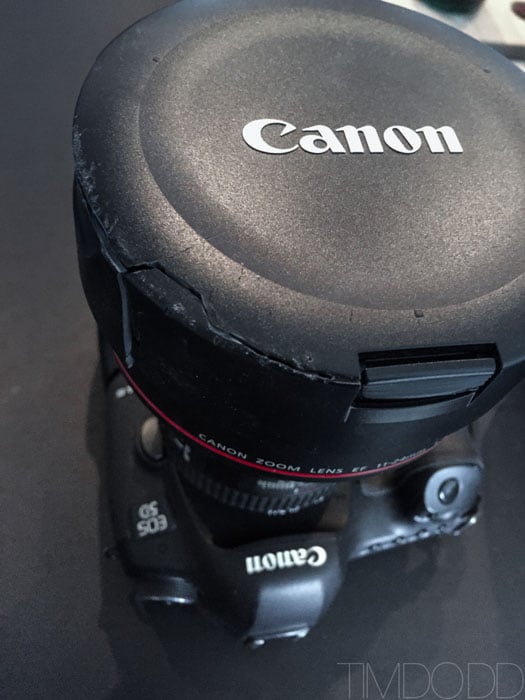 Luckily the replacement lens cap is only $25, but it’s currently unavailable. *Face in palm*

I’ll be using this lens primarily for architectural and real estate shoots. It’ll also be a travel companion although I don’t use wide angle lenses for my landscape shots. It also won’t replace my 24mm F1.4L for weddings and events because I need the additional brightness of the prime. There’s just too many times that I’m hand holding at F1.4, ISO 3200, 1/50th of a second and I have NO room for a slower F stop, let alone a lens that lets in 8 times less light.

About the author: Tim lives in Cedar Falls, Iowa, and has been a full time professional photographer since 2009. He’s been chosen as Flickr’s featured artist of the week in 2014 for his Everyday Astronaut series. You may be familiar with Tim’s work through Reddit as his photos have been on the front page several times (/u/termderd). His work has been featured on NBC’s the TODAY show, a print feature in The Guardian’s Art & Design section, Huff Post, CNN, BBC, Reader’s Digest, yahoo news, Buzzfeed’s top posts, MSN, HLNtv, and Glamour.com. His photos have been published in AP magazine three times, The Sun UK newspaper, BILD newspaper in Germany, The Guardian, Astronomy Today, Ciel et Espace and others. You can connect with him through his website, Facebook, and Instagram. This article originally appeared here.