Editor’s note: If you’re unfamiliar with how to interpret MTF charts, you can find a primer here. 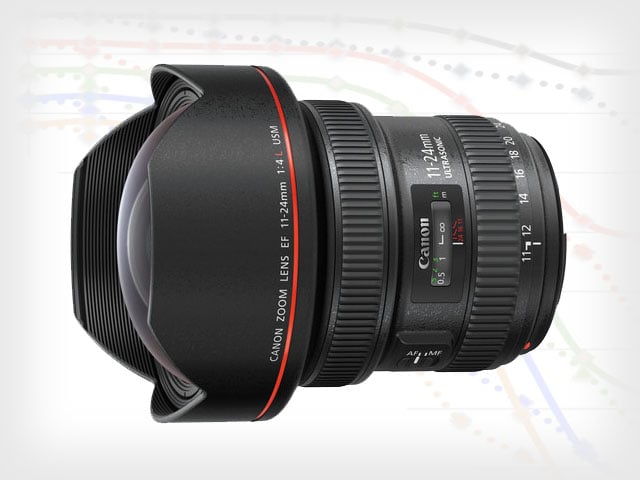 I’ll be honest. I’m pretty excited about the Canon 11-24mm f/4 L lens. I love shooting ultra-wide and the chance to shoot this wide with a rectilinear lens on a full-frame camera has me pretty excited. But I’m also very aware of how near-impossibly difficult designing a lens this wide would be, so my expectations were tempered a bit.

There’s a reason I’ll often stitch together a couple of 24mm shots for a landscape rather than take one 16mm shot. OK, there are several reasons, but image quality is high among them.


So I couldn’t wait to get the new lens on the optical bench to see if it was even close to acceptable at the wide end. But there is a bit of a problem there. We’ve never had the opportunity to test anything at 11mm focal length before. So what do we compare it to?

I decided we’d compare the 11-24 to itself. We’d get an idea of how well it did at the long end compared to other 24mm options, and then compare those results to the wide end. The wide end can’t possibly be as good as the long end, of course, but we can see how close it is.

This is not a detailed lens review, of course, just a nice quick assessment of resolution with the new lens.

This Sucker is Heavy, BTW

Looking at a comparison of the wide f/4 zooms most of us are familiar with, the new Canon 11-24mm is a little shorter and wider than the Canon and Nikon 16-35 f/4 lenses.

The new Canon lens actually most resembles the Nikon 14-24 f/2.8 lens, not just in size and shape but also in the very protruding front element.

I decided to start by setting the bar ridiculously high. The best zoom lens we’ve ever tested at 24mm, and it’s not very close, is the Canon 24-70mm f/2.8 Mk II. To even the playing field totally, we tested both lenses at f/4. (We had 3 copies of the 11-24mm f/4 L to test. The MTF chart shows the average of the three, each tested at 4 rotations, as is our standard.) 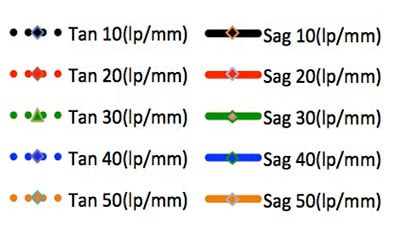 You can choose whether your glass is half-empty of half-full. No, the new lens doesn’t resolve as well as the Canon 24-70mm f/2.8 at f/4 and 24mm. Nothing does, really. But it’s decently close to it, and this is actually a good performance. I think we all have to agree the glass is pretty full this time. The new Canon 11-24mm at 24mm is really good. Other than having more astigmatism in the middle of the field, the area from 5 to 15mm distance from center, it’s a bit better than the Canon 16-35 f/4 IS. Let’s see how much it deteriorates at the wide end.

For completeness let me point out that I had to modify the inputs at 11mm just a bit. At certain angles, the fixed hood would prevent MTF measurements at 20mm distance from center (it’s supposed to do that). That means that while each lens was measured at 4 rotations from the center to 18mm, there were only 2 measurements at 20mm. It doesn’t matter for anything other than variance measurements, which I’m not going to get into today, but I just want to mention it. 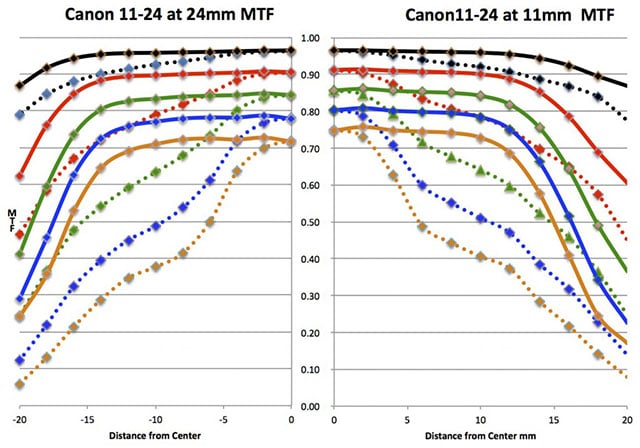 If you’re like me, you had to look twice to see that there are some definite differences. The lens is actually a tiny bit sharper in the center at 11mm. The outer 1/3 of the image has a tiny bit lower resolution at 11mm compared to 24mm. But the differences are pretty minor and I doubt any amount of pixel peeping could show them to you.

The truth is the two ends are so similar that I redid testing just to make absolutely certain we hadn’t messed up. You rarely see a wide zoom where both ends have such similar image quality. I was totally shocked that the lens would have this kind of performance at 11mm.

For completeness we also tested the lens in the middle of the zoom range (about 16mm). 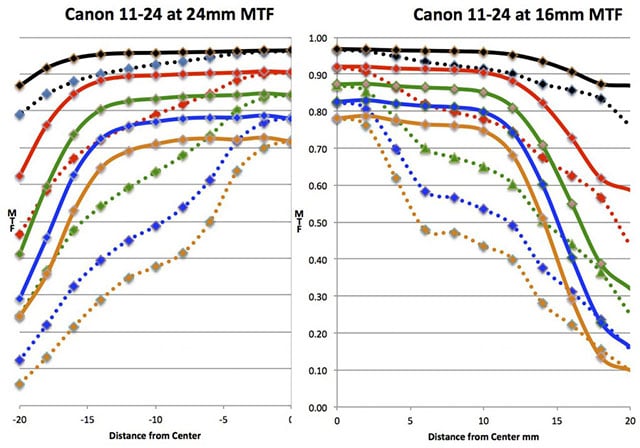 As you can see, the center t 16mm has an even higher resolution than the two extreme ends, although the edges are just a bit weaker.

But all of that is hair-splitting; this is a remarkable lens. Canon made the widest full-frame rectilinear lens available, and made it with superb image quality throughout the zoom range. Once again, hat’s off to Canon’s lens designers.