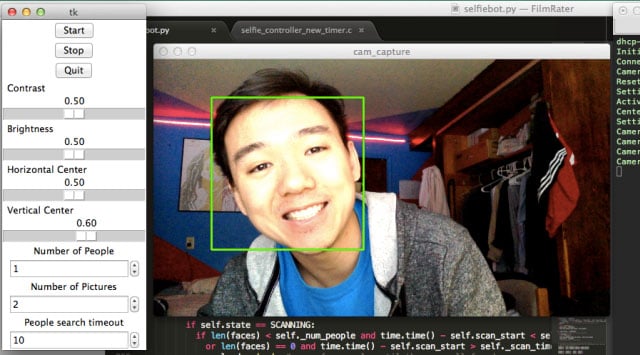 Cornell offers a course on designing with microcontrollers, and this year’s final project submissions featured a couple of groups who decided to build robotic photographers that help capture selfies.

One of the groups created the Selfiebot, “your personal photographic companion.” It’s a robotic camera that constantly scans a scene for faces using face detection. When it finds suitable faces to photograph, the robot will frame the subjects and then capture a shot. There are a number of settings you can tweak to customize your shot, including contrast, brightness, horizontal and vertical positions of faces, and number of subjects.

Here’s a video in which the group discusses the project and demonstrates the bot:

A second project featured a robot camera that’s slightly more directed in its activities. Called a “sound localizing camera,” the robot is an iPhone camera that’s controlled by claps. Clap once to have the robot turn its “head,” and clap a second time to have it snap a photo.

The group says the system would be great for people who travel alone and need help taking selfies. Another use case is for families who don’t want to leave out a member when capturing a group shot.

Here’s a video demo (to see the bot in action, jump to about 1 minute in the video):

You can also read more about the technical details of this project on the group’s website.

Tip: You Can Use Your Wallet as a Simple Tripod for Your Smartphone