Besides the dreaded vertical video, the worst thing about capturing video on a smartphone is camera shake, which leaves your video looking rather jerky and chaotic at times. Most stabilization rigs are built with much larger cameras in mind, but ADPLUS Co. is looking to change that with their ‘ultra-small’ Elephant Steady stabilizer for the iPhone. While the basic design principles of the Elephant Steady are consistent with much larger rigs, the Elephant steady uses a combination of innovations and technologies to set itself apart from the rest, allowing it’s size to be greatly reduced.

Specifically, Elephant Steady is meant to be used with a dedicated app. As you can see in the video and image above, the Elephant Steady requires you to plug in a standard 3.5mm plug into your iPhone. This is done so the app can directly communicate with the stabilizer, using the iPhone’s built-in accelerometer as a ‘brain’ of sorts, to power the Elephant Steady’s two internal motors.

By using the iPhone as the processing workhorse, the team behind Elephant Steady was able to focus on only including the absolute necessities into the stabilizer, itself, which lends to it’s pocketable size. Inside of the handle is a rechargeable Li-Ion battery that powers the motors while on the go. At the top of the grip, you’ll find both a power switch and tilt control button, both of which allow you to control when the Elephant Steady is in action. 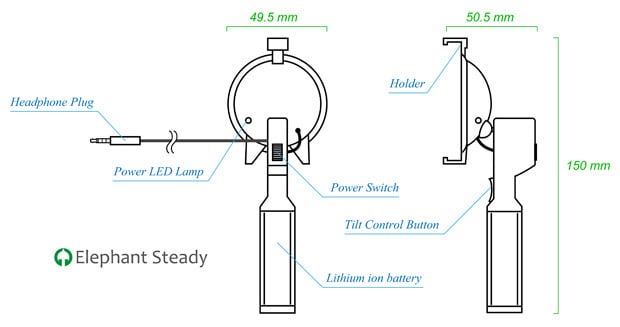 While the previews in the above video don’t give us a great deal of examples to go off of, the technology looks promising. By harnessing the iPhone’s processing power and focusing only on the basics, the Elephant Steady is just what you need and nothing more.

To read up more or secure your pledge, head on over to the Kickstarter campaign.

Tutorial: Everything You Need to Know About Using Auto Exposure Bracketing