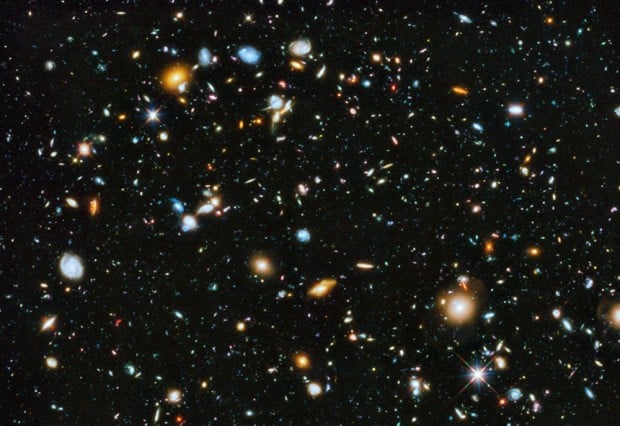 In their seemingly never-ending effort to amaze us mere mortals, NASA has released yet another jaw-dropping Ultra Deep Field image. The above image is a composite created from only the best of the images captured between 2003–2012 by the cameras aboard the Hubble Space Telescope.

Made up of light from the visible spectrum, in addition to a plethora of ultraviolet data, this composite is a culmination of 841 individual photographs, some of which were also included in Hubble’s first Ultra Deep Field images.

The resulting updated image as we see it above contains no less than 10,000 individual galaxies — giving us the approximate density of one galaxy for every hundred and twenty pixels of the full resolution image. These galaxies range in distance from earth between 5 and 10 billion light-years away, with some of them having formed just a few hundred million years after the Big Bang.

Beyond being an unfathomable collection of numbers, this image is said to be of great use to scientists, since the updated data is thought to provide a new set of insights for scientists looking to better understand the beginnings of our universe.

AppCam Claims Leica Stole Its Software for the Leica T, Slams Them via Press Release