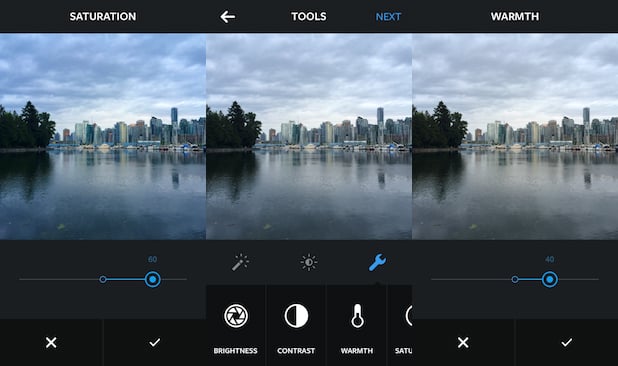 Instagram just released its most significant update since the social photo sharing app enabled video sharing, adding a slew of photo editing features that bring the app in step with other major photo capture and editing apps like VSCO Cam.

The update adds two major features: the ability to edit all of the major parameters of your photos — such as contrast, color temp, brightness, saturation and so on — in-app, and the ability to select the strength of the filter you choose to apply.

In all, you can now edit Brightness, Contrast, Warmth, Saturation, Highlights, Shadows, Vignetting, Sharpening and Filter Strength, using sliders to select the degree to which the effect or edit is applied. 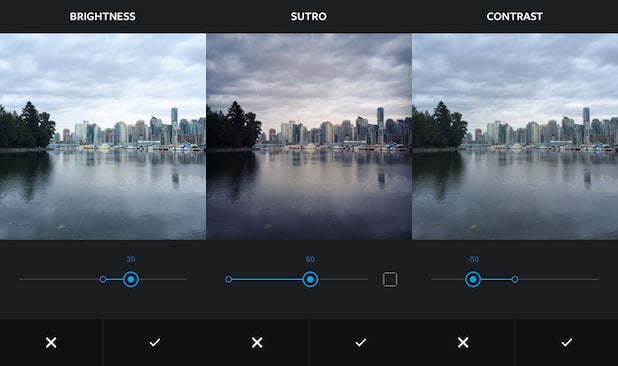 But this update, as Instagram CEO and co-founder Kevin Systrom told us over the phone yesterday, wasn’t “cooked up over the weekend.” He was adamant that many months of research went into making sure these edits are extremely responsive.

The bar the Instagram team held themselves to is the one set by high-end photo editors like Photoshop and Lightroom, said Systrom. And even though Instagram can’t and isn’t meant to match these powerhouse editor, Systrom explained that they did their best to make sure the edits are applied in the same way.

They painstakingly tweaked each editing parameter so that, for example, bringing out the shadows doesn’t change hues, and saturation affects each color channel differently, rather than bringing all the hues out at the same level. All of this research should, in the end, add up to a quick-and-easy editing experience that feels similar to the big guys, even if it isn’t as powerful.

Finally, in addition to the addition of the photo editor and filter strength slider, Systrom also made sure to mention the improvements in speed. The team removed many unnecessary steps in the video upload process, so users should notice a significant drop in the time it takes to upload and post videos to Instagram.

Here’s a quick video demo of the new editing features in action:

Say what you will about Instagram, but the service has become almost as much a part of the professional photo community as the amateur community.

The then-unique mix of social network and photography app initially launched Instagram to amazing heights. The addition of features like direct sharing improved on the social networking features to make sure the app stayed competitive with messengers like Snapchat.

This update, however, strikes right at the core of what Instagram is about: photography. And even though many professionals who use the service will have edited their photos before uploading, we have no doubt the ability to edit images in-app will come in handy when you’re out and shooting on-the-go.

Instagram is literally rolling out the update right now for both iOS and Android (Ice Cream Sandwich and above) users, so head over to the iTunes App Store or Google Play to download or update and take these editing capabilities for a spin.

Quick and Dirty Explanation of Color Depth: What It is and Why You Should Care