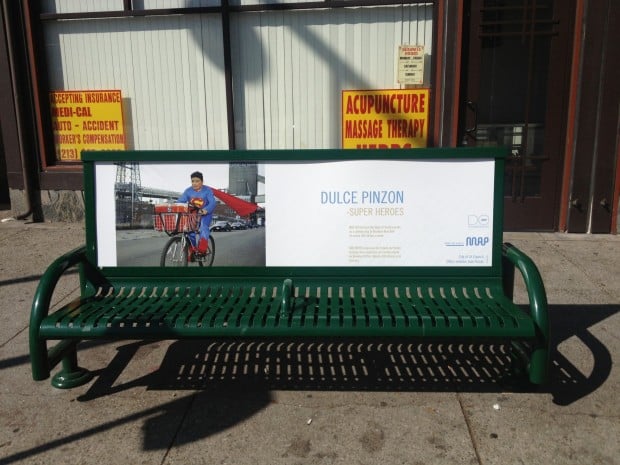 What do you get when a city council member’s office, two art nonprofits and an outdoor media company come together and agree on something? What you get is this terrific Los Angeles Public Art Project.

Having led the effort to adopt a new Mural Ordinance for the City of Los Angeles, 14th District Councilmember and strong advocate for public art Jose Huizar wanted to create a new public art project in his District.

In order to make this happen, Huizar had his Planning Director Tanner Blackman approach the Executive Director of the Do ArT Foundation, Carmen Zella, to explore the idea.

I contacted Zella to found out more about the beginnings of this project. Here’s what she had to say:

Tanner knew that Do ArT was interested in creating publicly visible art that expanded our mural work into alternate mediums. So after I had recently returned from Montreal, Canada where I was inspired by what I saw in the streets of that city, I contacted Tanner to continue our discussion of this project and suggested that we partner with Mouvement Art Public — a Montreal based arts non-profit dedicated to creating public art on unsold advertising space — on this project.

Martin Outdoor Media also agreed to join the project, and a collaboration was born:

The Artistic Directors of MAP and Do Art, and Tanner, representing Jose Huizar’s office, wanted to launch the programming with artists that spoke directly to the subject of the street, and also to a population of the bus commuters of LA.

The exhibition focuses on Los Angeles-based artists whose work and subject matter is site-specific and relevant for an exhibition of this kind. While this model has been successfully used by MAP for over 7 years, this is the first exhibition on bus benches in Los Angeles.

We feel that our approach is sensitive to the site as we feel the best and most effective projects are the ones that consider the audience, the architecture and the relevance of the subject in that location.

Contemporary artist Jon Rafman lends images from his 9 Eyes series, which depict interesting and unusual images caught on Google Earth Street View from around the world. With an ostensibly neutral gaze, the Street View photography exhibits a spontaneous quality unspoiled by the sensitivities or agendas of a human photographer.

Mexican artist Dulce Pinzón provided images from her “Superheroes” series of photographs, which explores the lives and labor jobs held by many migrant workers, specifically of Mexican heritage, and pays homage to these brave and determined men and women who somehow manage, without the help of any supernatural power, to withstand extreme conditions of labor in order to help their families and communities survive and prosper.

This project consists of color photographs of Mexican immigrants dressed in the costumes of popular American and Mexican superheroes.

Carmen was happy to say that the public’s response thus far has been positive, and people have understood the work and really appreciate the efforts made to select work that is inclusive and speaks to them.

And, due to the success from all sides, a second series is in the works as of this writing. Photographer Andrew Bush will be a featured artist.

Image credits: Photographs provided by the Do Art Foundation and used with permission.

Ricoh Accidentally Launches K-3 Webpage Early, Have a Look at What’s to Come