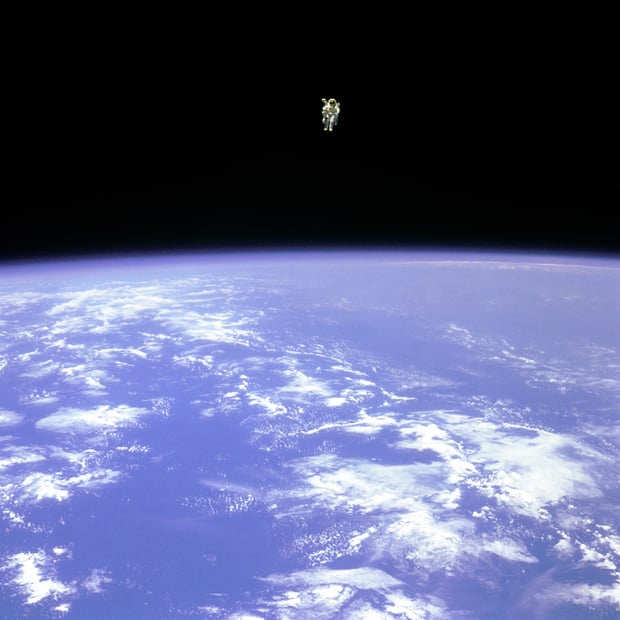 One of the key challenges in environmental portraiture is finding the right balance between subject and setting. Zoom in too close, and you lose the magic of location. Too wide, and it’s not a portrait anymore.

There are times, however, when you have to forget the rules. Like when you’re orbiting 150 miles above the Earth and one of your colleagues is about to take the first ever untethered space walk.

Using a newly designed jet pack that promised to give astronauts unprecedented mobility, McCandless floated as far as 320 feet away from the shuttle as Gibson peered through the viewfinder of his Hasselblad and captured the journey from the other side of the glass.

Speaking with Smithsonian about the photograph below, Gibson said he realized at the time that he was capturing something epic. He remembers thinking “Holy smokes, what an image this is… If I don’t mess this up, I will get an Aviation Week cover with this picture.”

He got two… but even more than that, Gibson’s photos from that space walk have become some of the most reprinted images in the huge NASA catalog (some of which you can now find on Instagram), especially the photo above.

Both pictures eloquently comment on mankind’s place in the universe, and have been used to adorn everything from album covers to wall clocks.

McCandless told Smithsonian that he believes the key to the second image’s enduring popularity is that you can’t tell who’s inside the spacesuit. “I have the sun visor down, so you can’t see my face, and that means it could be anybody in there,” says McCandless. “It’s sort of a representation not of Bruce McCandless, but mankind.”

Lexar HR1 Reader Hub: Customize Your Setup and Read Multiple Cards at Once