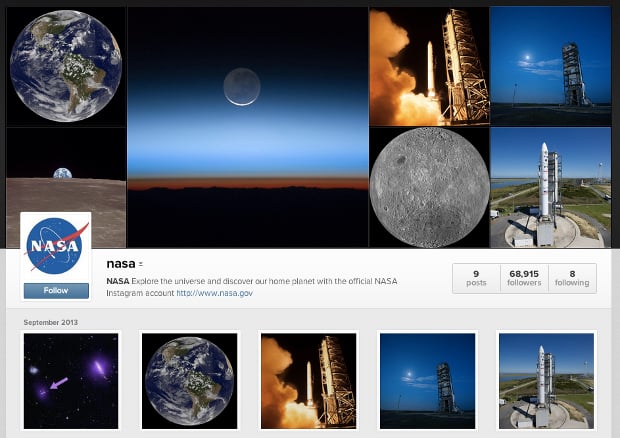 Although there’s no shortage of accounts on Instagram where you can see some great space photography courtesy of NASA, the space agency just upped the ante by officially joining the social photo sharing platform itself.

NASA opened its own Instagram account on September 6th, and since then has uploaded nine photos both old and new for your following pleasure. Even though there are only nine, we already have the classic Apollo 11 photo of the Earth rise over the moon, as well as a beautiful satellite photo of the Earth as seen by the GOES satellite yesterday.

In addition to offering another great place to look up space photography and keep up with NASA’s goings on, the account is also great for those who like their photos attached to an educational opportunity. Each photo comes complete with a detailed caption, explaining the phenomenon pictured or offering some interesting behind the scenes detail.

Here are a few of the first photos NASA has deemed worthy of uploading to Instagram, including a couple of the Minotaur V rocket that just launched the Lunar Atmosphere and Dust Environment Explorer (LADEE) into space two days ago:

“We’re constantly looking to expand our social media portfolio to include tools that will best tell NASA’s story of exploration and discovery,” said NASA Press Secretary Lauren Worley in a press release announcing the new account.

“Instagram has a passionate following of users who are hungry for new and exciting photos. We believe we have some of the most engaging images on and off the planet — and we can’t wait to engage with Instagrammers.”

Almost 70,000 Instagrammers have already jumped on the NASA bandwagon as of this writing. If you want to join them and add some great astrophotography to your Instagram feed, be sure to check out the account and click that follow button.