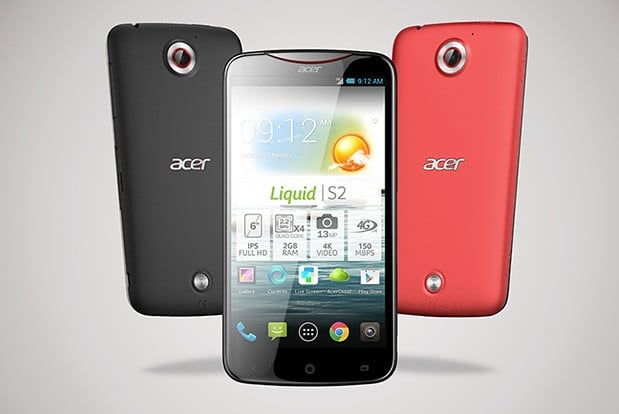 The ability to shoot 4K video is usually reserved for higher-end cameras, but that’s all changing. Just like ultra-high pixel counts made their way onto smartphones with Nokia’s 808 PureView and Lumia 1020, 4K video has now infiltrated the mobile device world as well.

All rumors up till now pointed towards Samsung being the first to introduce 4K video recording to the world of smartphones with its upcoming Galaxy Note III, but it wasn’t Samsung that made the leap first. Instead, Taiwanese rival Acer beat Samsung to the punch by unveiling the 6-inch Liquid S2 to the world earlier today.

The formidable phone boasts a 6-inch 1080p IPS display, a Snapdragon 800 processor and an extremely capable camera. The shooter packed inside features a 13MP backside illuminated sensor that’ll be helped by an LED ring flash in low-light environments. The camera’s most impressive capability, however, is without a doubt the ability to record Ultra-HD 4K video.

Additional camera features are built into the software side of things. Users will be able to use the Quick First Shot feature to take photos from the lock screen, and the Favorite Mode will let you create up to five “profiles” with customized effects, flash, capture mode and scenes. You can also adjust focus and exposure individually.

The Liquid S2 isn’t likely to hold the title of “only 4K-capable smartphone” for long, since the Galaxy Note III is expected to be announced on September 4th. But for 2-days time, it’ll be the only one.

Neither pricing information nor a US release date have been made available at this time, but Acer has revealed that it will release the S2 in Europe sometime in October.