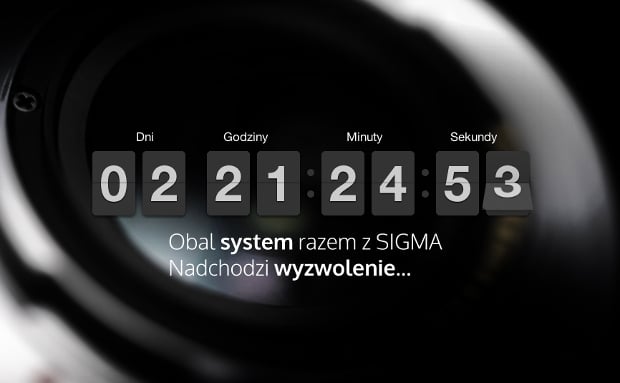 It’s not uncommon for photography companies to launch strange teaser campaigns that get folks wondering what the company has up its sleeve. In the past, we’ve seen everything from bags of walnuts to mysteriously worded ads. The latest from Sigma falls into the second category, and has the entire photographic community buzzing with speculation and excitement.

The teaser was launched by Sigma Poland as its own website named “Sigma Foto Revolution.” In addition to the countdown pictured above — which states that we have about 2 days and 20 hours left to wait (depending on your time zone) — the tagline reads “Obal system razem z Sigma — nadchodzi wyzwolenie.”

In case you don’t speak Polish, that translates into “Overthrow the system with Sigma — liberation is coming.”

Everybody has their own ideas about what this could mean, but the bolding of the words “system” and “liberation” has led 43Rumors to point out a couple of possibilities. Either Sigma has a new system camera with a new mount in the works, or (more likely) the company is planning to announce some sort of universal adapter that would allow you to use any Sigma lens on any mirrorless system.

The latter seems most likely simply because Sigma has stated very clearly in the past the it has no intention of making a mirrorless ILC of its own … ever. We’ll find out if Sigma decided to renege on that commitment in just under 3 days, but whatever the announcement is, it seems we’ll have an exciting new product on our hands before long.

Photographer Gets a Second Chance at Life, Embarks on a 100 Portrait Journey