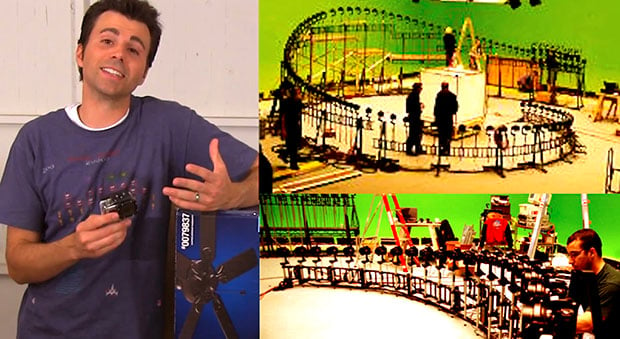 Want to shoot insanely cool Matrix-style “bullet time” footage at home? You can do so with a single rig built out of relatively cheap components.

Those are the main components. To build Rober’s rig you’ll also need a circular platform, a backdrop, and a couple of flashlights. Here’s what Rober’s rig looks like:

Basically, the ceiling fan-powered rig spins an object in the center at high speeds, but the plain backdrop spins along as well. This makes it appear that the background and subject are stationary while the camera is rotating around the subject!

Ordinary bullet time is done using tens of DSLRs and expensive rigs, but Rober managed to build his rig for roughly $30 (the price of his cheap fan).

Here’s a video in which Rober introduces his rig and shows off some of the amazing sample footage he was able to capture using it:

All the sample clips in the video were captured using a GoPro Hero3 shooting at 240 frames per second. Rober didn’t use any slow-mo faking software (e.g. Twixtor) for the effect, but he did use After Effects to smooth out some of the motion at certain parts.

(via Mark Rober via Gizmodo)

Thanks for sending in the tip, Eric!

P.S. We shared a similar concept back in March that involved capturing “bullet time” footage using a GoPro mounted on a rotating arm, but the results of that project were nowhere as awesome as this one.

10 Things an Art Director Looks for in a Photographer