Rest easy, future astronauts. If occasional filmmaker and full-time tinkerer Mark Rober and his pals are any indication, NASA engineers can MacGyver their way into or out of any situation.

Rober, you may recall, is the former NASA tech guy (now an entrepreneur) who built an awesome pseudo bullet time rig using little more than a GoPro camera, a ceiling fan and plenty of ingenuity.

Problem is, he felt that the 240 fps performance of a GoPro was holding him back. So Rober talked some pals at Aimed Research into loaning him a slightly more expensive 7,200 fps Phantom camera. 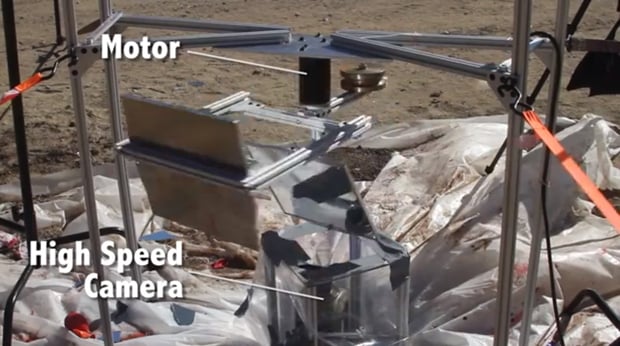 The goal was to build a similar 1-camera ‘bullet time’ rig using the much faster camera and see what happens.

Of course, the Phantom is too big and heavy (and not to mention expensive) to do the spinning itself — besides, that kind of thing tends to make camera owners nervous — so, instead of attaching it to a ceiling fan, Rober and friends decided to place it inside a stable, transparent enclosure below a spinning armature complete with two mirrors that beam light straight to the camera lens.

The result is some amazing 360-degree bullet-time footage of water balloons, soda bottles and more exploding and sending their liquidy contents into the atmosphere. 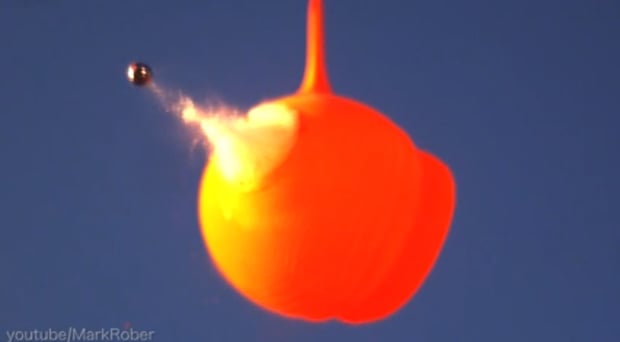 On the off-chance you’re thinking that the rig seems pretty straightforward, Rober told Gizmodo that it had to be redesigned a total of 15 times over the past few months — addressing things like light loss from cheap mirrors and troubleshooting to find a focal length/aperture that actually worked — before they could pull useable footage.

To see the slow-motion pseudo bullet time rig in action, check out the video at the top for yourself. And if you want to continue following Rober’s DIY adventures, head over to his YouTube channel by clicking here.