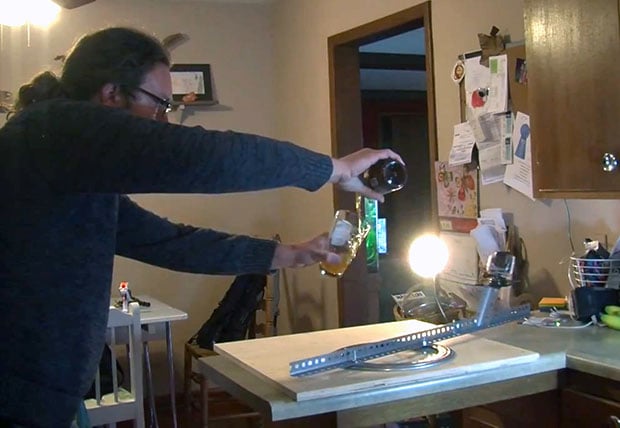 One of the interesting ideas involving slow motion cameras (i.e. high speed cameras) is to move the camera very quickly during shots, resulting in footage that looks like the camera is moving in real time while everything in the shot moves in slow motion. Last year we shared an incredible demo reel by German studio The Marmalade, which uses this technique.

Caleb Kraft over at Hack A Day was inspired by this concept and by the bullet-time rigs that have gotten quite a bit of press lately, and decided to try his hand at moving slow-mo footage using a single GoPro.

He used a GoPro HERO3 Black Edition, which can shoot 120 frames per second at 720p. After attached an arm to a “lazy susan,” Kraft mounted the camera to the end of the arm and then spun the camera around while doing something “action packed” in the space where the camera is pointed (shown in the screenshot above).

Here’s a video in which Kraft explains the concept and what he did:

…and here’s a short demo reel showing some of the shots Kraft was able to capture using the rig:

It may not be too similar to bullet time, but it’s still an interesting example of what you can do on a very, very small budget.

Bullet time with a single GoPro [Hack A Day]

Nikon Expanding to Laos for Its DSLR Manufacturing