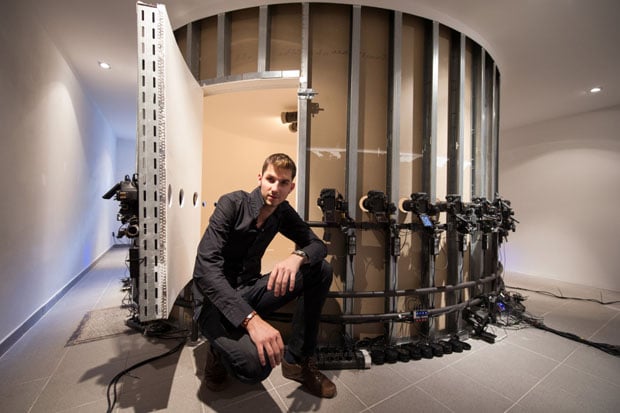 Back in March, a client for whom I’ve done some light consulting work asked me if it was possible to capture a 360-degree-image that can be rotated afterwards. I said of course, but didn’t think that much about the consequences — it’s a project that would wake me up at nights for the next few months.


Everything was fine until the moment he showed me the room I was supposed to make the rig in — it was his villa. 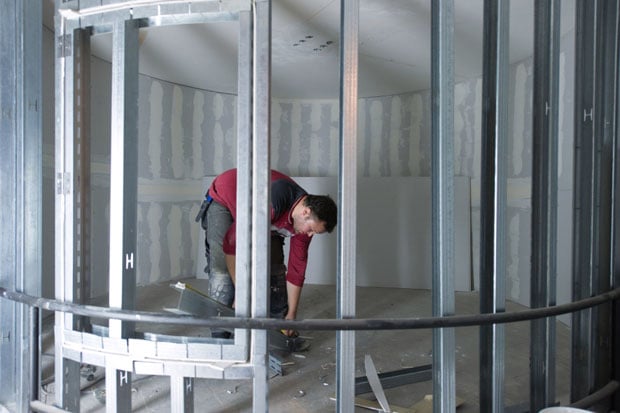 This type of project is generally done in warehouse-sized spaces, and there is good reason for that (lighting being one of them). Well, this was a garage about 130-square-feet in area and a ceiling about 8 feet tall. My first reaction was to laugh for a little while. Then I asked if he was serious. I then saw from the look on his face that he really did want me to build the rig there, so my next reaction was, “I have to think about it”. 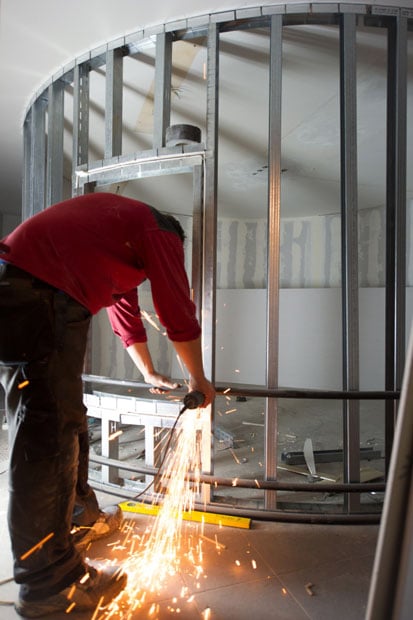 Don’t get me wrong, I’m up for any badness, but this was beyond crazy and bananas.

Next day we sat down in a restaurant and started talking about this a little more… what his vision was, what look he wanted to achieve, and so on. What I ended up with was that he would like to have a shadowless photo on a white background. Maybe some contrast in there, but definitely shadowless.

This was a bit funny, because the only thing I know that makes contrast (light-wise, not color-wise) is a shadow. But sure, let’s make history. 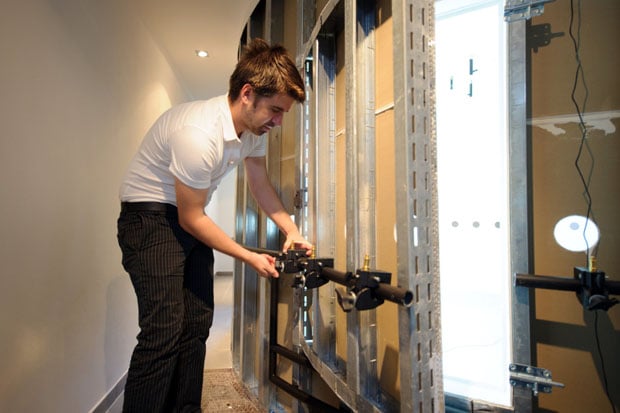 Another request he made was to make it as easy as possible for further retouches, since he planned to use the rig extensively.

I took a few days to think about what direction I would go with the project — things like lighting the subject, the background, the fluency between the photos — the distance between the cameras, subject, camera count — just about everything. I’ve seen quite a few results from “bullet time” systems all around the world so I knew what things and results I would like to avoid, especially with my white background.

I came up with some ideas, but just to be sure, I called my friend Daniel over (he’s pretty much at the same technical level as I am) to have somebody to bounce ideas off. From that moment on, the concept just grew. 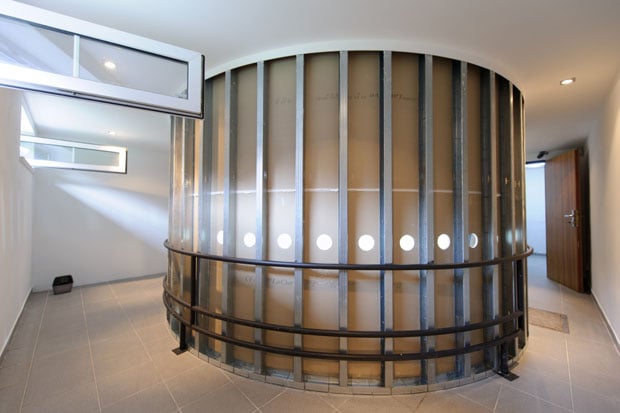 The next day, I called the client and accepted the challenge. I asked for an advance before I start putting everything together, making phone calls, etc. just to be sure there would be no trouble afterwards. Got the advance the very same day (to my surprise) and then we got started.

Since we had so little space to make the rig on, mainly due to the low ceiling, my initial idea was to put up some kind of a diffusing tent around the subject and light it from the outside with big octas around. However, there were so many issues we had to address (possible flares, the quality of the image due to the lighting, how to spread the light evenly from the close distance, tension of the diffusing textile, the possibility of someone damaging the textile, etc.), so we moved on from this idea. 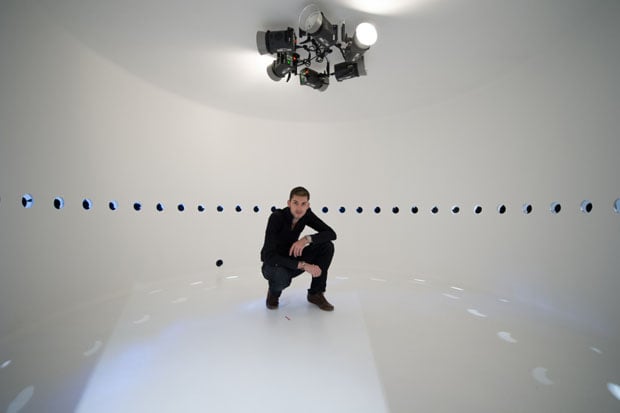 I called another colleague and we came up with the idea of making a cylinder, which we could paint from the inside and repaint if necessary in the future. The only problem we had to solve with this new design was how to light it from within. Since the request was to have a subject on a white background, we decided to build it completely in white so that the light would bounce around like crazy (eliminating shadows).

We started putting together the precise lighting setup. We wanted to give the client the option of using other styles of lighting for non-shadowless photos, so we arranged 6 lights on the ceiling in a circular formation (seen above). 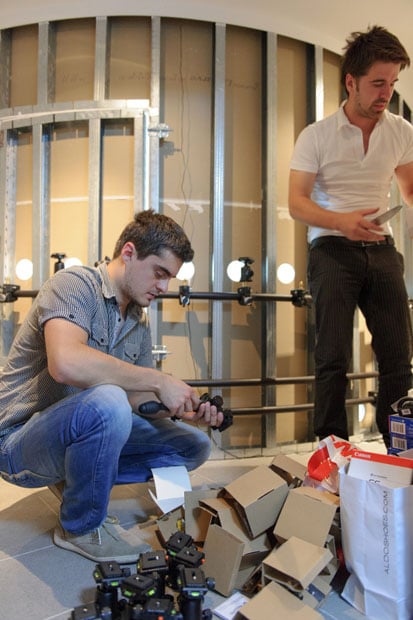 For those of you who are wondering about the brand of the lights: although I shoot with Profoto I chose to go with Elinchrom this time (to save some money). Elinchrom because I know it satisfies the requirements for professional use, since it has such a consistent amount of light, consistent color temperature, etc.

So that was step one. Step two was putting together a list of the gear we needed to buy. You wouldn’t believe how much trouble it was to simply find a seller who was able to send us 50 cameras and prime lenses to the middle of Europe. It was unbelievable. If it were Canon 5D MKIIIs or Nikon D800s or something that class, that would be understandable, but Canon 600Ds? Come on! 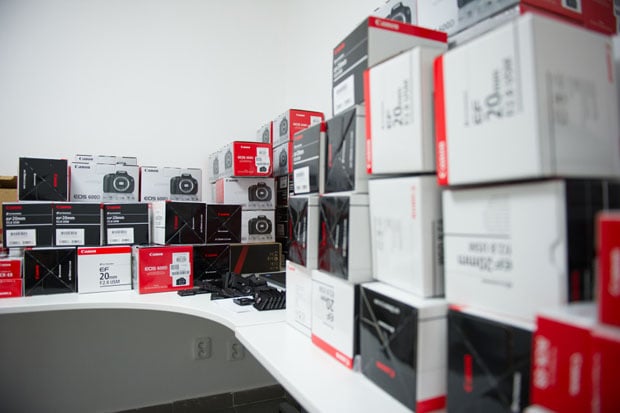 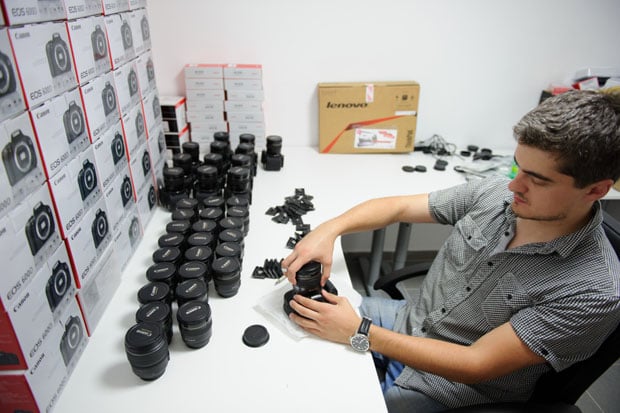 We chose the cheaper Canon DSLRs over other brands simply due to budget constraints. I originally wanted to go for Nikon (since it’s the brand I shoot with), but we had trouble solving certain issues with Nikon technicians. We had to fire all 50 cameras at once and transfer all the data off the cameras, and there is currently no software on the market (that I am be aware of) that can do the job (at least at the time we did this project). Maybe there is, but I couldn’t find it. There were potential programs we could use, but they were written for Linux. I also could have had programmers around me write the software, but that would have taken weeks or months, which didn’t have. We eventually found a single program for Canon DSLRs, which turned out to be a huge waste of money. In the trial version it had a limited options, so we did have to buy the full software. After we did, we found out that although the software is able to trigger all the cameras at once, it has a slight delay between the cameras. Like 1/5s between each camera. This was a big issue for us, since we needed to sync the flash between the 50 cameras as well (we can’t light it with other types of lights, lest we fry the person in the cylinder.

Just like Leonardo DiCaprio in Inception, we had to go deeper. Finally, we reached the best and simplest solution. Since each camera can be fired via a cable trigger, we created a net of cables that does just that — triggered all the cameras at once. Two buttons are located at the end of the net: the focus/wakeup and trigger buttons. Voila! Firing problem solved. 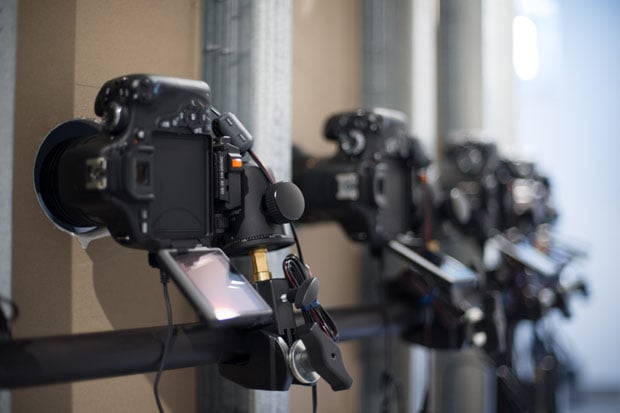 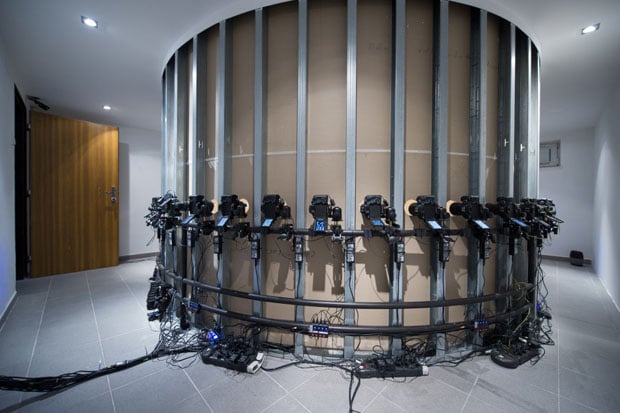 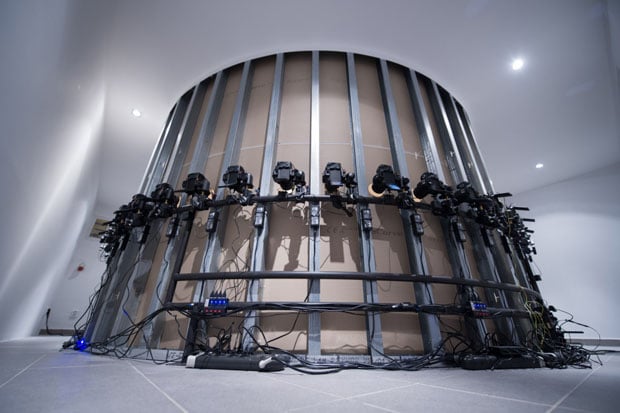 The software allows us to download the RAW images onto computers (there has to be 4 laptops, since the software can operate only up to 14 or 16 cameras and there are also bandwidth issues).

That’s pretty much the entire build process. Of course, I simplified quite a few things to not bore you with my thoughts throughout the whole project, but all in all, I hope you enjoyed the ride. I know I did, and would love to do it again — perhaps in a larger space.

The last thing I have to say will be a disappointment to many of you: I don’t have any resulting images to share with you due to the client’s request to not share any sample photos outside. Perhaps in the future some of his photos will begin to appear on the web.

Editor’s note: For a look at what a rig like this can do, check out these 360-degree light-painting photos we featured earlier this week.

About the author: Martin Legeer is a commercial photographer based in the Czech Republic. Visit his website here.