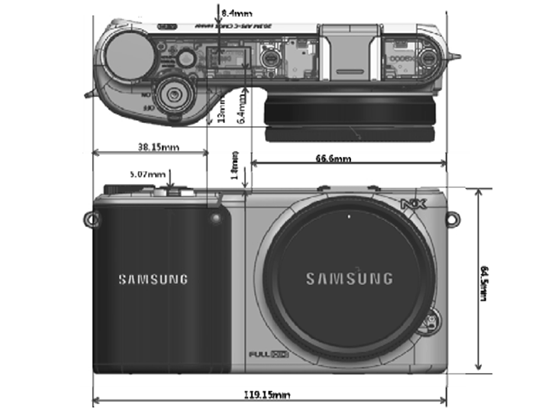 Samsung only has a couple of weeks before the rumored “sometime between January and April 2013” timeframe for an NX2000 “smart” ILC release runs out, and just on schedule, a FCC filing with a top and front schematic of the camera has come to light.

According to Engadget, all signs point to a 20.3-megapixel APS-C sensor for the NX2000, with 802.11n WiFi built in. If these schematics hold up, then there’s nothing to indicate that the leaked picture from South Korea wasn’t indeed an NX2000.

But where that rumor assumed the NX2000 would be running Android, it looks like Samsung is planning on equipping the camera with Tizen OS instead. Tizen OS is an open source mobile operating system that resides within the Linux Foundation and is governed by a Technical Steering Group (TSG) composed of Intel and Samsung, so it makes sense that Samsung would want to use it in its cameras. Traces of Tizen were already found on the NX300’s firmware, a full-on Tizen Smart camera would seem to be the next logical step.

Fortunately, if the original timeframe holds up, we don’t have long to wait until we find out for sure. For now, expect a new camera announcement, possibly paired with two new NX lenses (a 10mm f/3.5 and a 16-50mm f/2.8), sometime in the near future.

(via Engadget via Photo Rumors)

Stunning Documentary Portraits of Native Americans from the Early 1900s

BTS: Shooting the ‘Persons of the Year’ Cover for Time Magazine