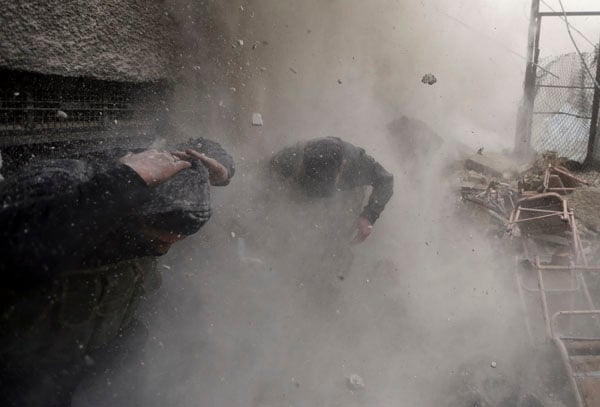 “Deadly sniper shot through the lens.” That’s the title of a photoblog entry published over on Reuters last week by staff photographer Goran Tomasevic, who’s covering the deadly conflict in Syria. The photo above was accompanied by the text, “A tank fired a couple of shells onto the top of the building and rubble fell down around us.”

The images offer a grim first person view into what it’s like to find oneself in the midst of the fighting. They also sparked debate over the ethics of putting photographers directly in harms way for the purpose of journalism. At least one news outlet is now taking a strong stance: The Sunday Times is reportedly refusing to receive photos from freelancers due to the risks involved.

How close exactly are photographers getting to the conflict? Well, the main series of photographs featured in Tomasevic shows two Free Syrian Army fighters being struck by sniper bullets. The photographer writes,

One moment, I heard two incoming shots. I was already aiming my camera on these two Syrian rebels. I heard the scream and saw one of them get shot. He was still alive as I was shooting but dying as he was carried away. 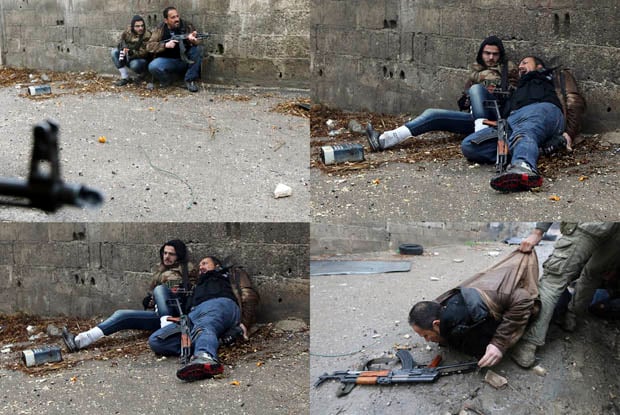 After the post was published, photography blog duckrabbit took to Twitter to question the ethics of such assignments: 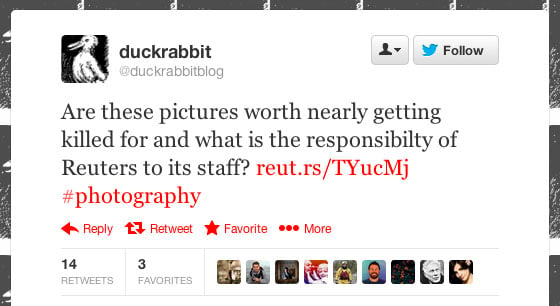 Today, the Press Gazette reported that The Sunday Times has refused photos of the conflict by British freelance war photographer Rick Findler because it does “not wish to encourage freelancers to take exceptional risks.”

The paper’s foreign desk reportedly praised Findler for his images, but informed him that it has “a policy of not taking copy from Syria as we believe the dangers of operating there are too great.”

The 28-year-old photographer disagrees with the policy, saying that it should be each individual photographer’s decision “to choose whether or not they take the risks.”

In addition to the risks, another reason for the policy may be responsibility. If a newspaper’s staff photographer is kidnapped by militants, then it has a responsibility to offer help. For freelancer photographers, the situation would become much murkier, and it appears that newspapers are trying to avoid such situations by eschewing freelance conflict photos altogether.

Image credits: Photographs by Goran Tomasevic/Reuters and used with permission