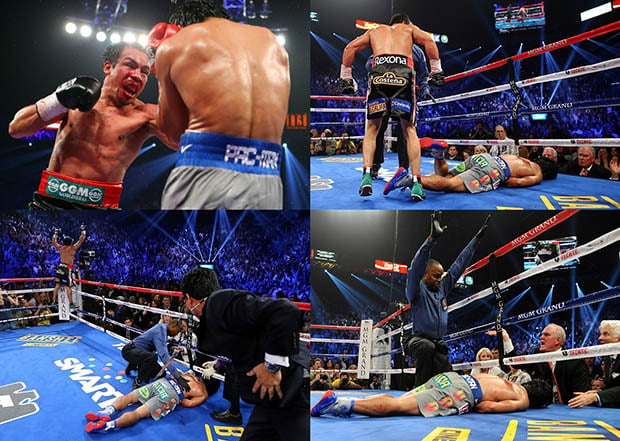 Well-known boxing photographer Al Bello says he was assaulted by boxer Manny Pacquiao’s team as he was photographing the fallen boxer after Pacquiao was knocked out by Juan Manuel Marquez this past Saturday.

After the knockout blow, the Getty Images photographer climbed up onto the MGM Grand Garden ring to photograph what was unfolding from a closer vantage point.

Bello claims that two key members of Team Pacquiao, adviser Michael Koncz and assistant trainer Buboy Fernandez, then began to punch and kick him as he was trying to snap the shots (shown above).

The photographer jumped off the stage to avoid confrontation, but Fernandez (who was on the ground crying when he noticed Bello) stepped through the ropes to pursue him. Luckily for Bello, Fernandez was held back.

Had I not gotten off the ring, I have no doubt the two of them would have beaten the [expletive] out of me and I might have been seriously hurt […] Nobody likes [photographing a knocked-out boxer], but I was where I was credentialed to be and I was trying to do my job, which is to document the event. It’s no different than the war photographers who have to shoot what is happening on a battlefield. Nobody wants to do that, but you have to document the history.

The confrontation started after Pacquiao’s trainer Freddie Roach asked Bello not to photograph the facedown Pacquiao within earshot of Koncz and Fernandez. When Bello disregarded the request — he was tasked with photographing the fight, after all — the two team members were not pleased. Roach later apologized for trying to hinder the photographer. 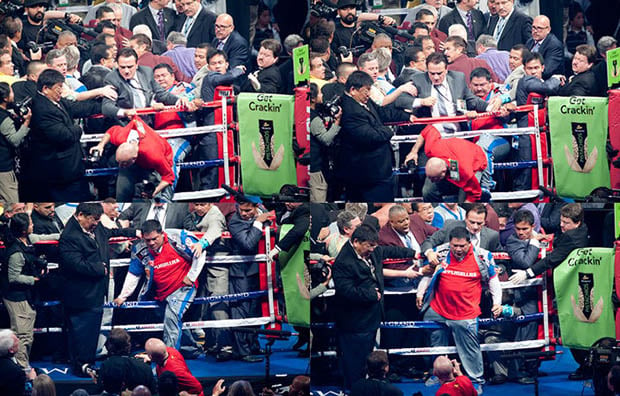 The Nevada Athletic Commission is saying that it will review the incident and consider possible punishments against the two Team Pacquiao members. Instead of criminal charges against the men or a settlement, Bello says he simply wants an apology.

P.S. Last month we featured a different photo of the two boxers in a behind-the-scenes video of a promotional shoot for the fight.

Thanks for sending in the tip, Joshua!

Interview with Billy Rowlinson: Youngest Photographer at the London Olympics