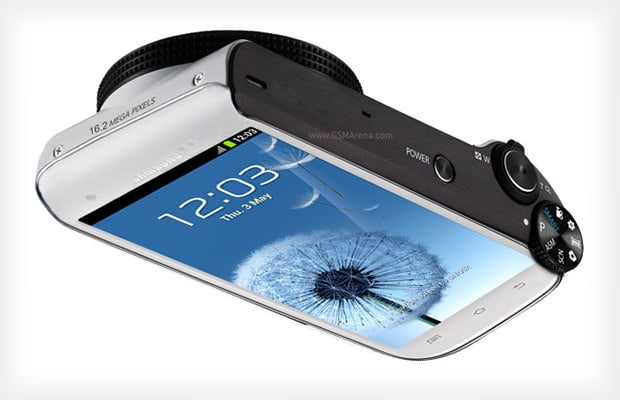 There’s a fascinating rumor floating around in the gadget world today. Apparently Samsung is planning to introduce a point-and-shoot camera that’s powered by Android OS and based on the popular Galaxy S smartphone. GSMArena, which first published the rumor and created the mockup seen above, reports that the camera will be named the “Samsung Galaxy S camera” (creative, I know). It’s said to feature a giant 4.8-inch screen and Android 4.0 Ice Cream Sandwich.

This news comes less than a week after Nikon shook up the compact camera industry by being the first major manufacture to introduce an Android-powered camer, the Nikon S800c.

In terms of design, GMSArena’s tipster (who says he has seen the camera with his own eyes) reports that it can best be described as a Galaxy S III strapped to the back of a point-and-shoot camera. It’s extremely minimalist in its UI, with no physical buttons on the back of the camera. Other specs include a 16 megapixel sensor, a 10x zoom lens, a pop-up flash, and an ergonomic grip design.

For Internet connectivity, it will reportedly come in two flavors: one with Wi-Fi only, and another with 3G and Wi-Fi. This would be the first compact camera on the market that packs 3G connectivity.

The camera may be announced as early as the end of this month, at IFA 2012 in Berlin. Remember what we said about future cameras having data plans? It looks like that day will soon be upon us! Who knows… maybe the camera will even make calls.

Synchronize Your Lightroom Catalog with the Cloud Using Mosaic View