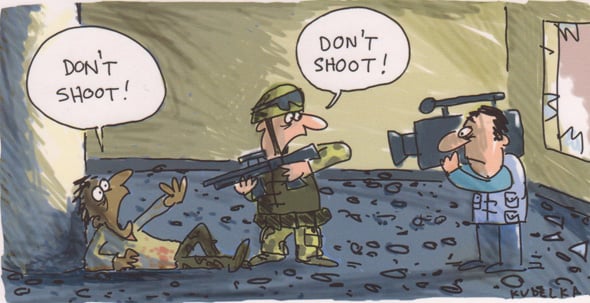 The link between the camera and gun is evident in a shared metaphor, but is historically closer than we might imagine.

During the 2004 battle for Fallujah in Iraq, NBC cameraman Kevin Sites filmed a marine shooting an insurgent in a mosque. Jon Kudelka’s cartoon (published in The Australian) references this event and points to the similarities between shooting images and people, something we recognise through that common language.

However, as Paul Landau has written, the connection exceeds language because “the technologies of the gun and camera…evolved in lockstep,” with George Eastman of Kodak the pivotal figure 1.

In the 1860s the development of breech loading guns, using chemicals enclosed in a cartridge with an interior firing pin, gave the hunter a mobile weapon with ammunition that did not explode in the users face. At the same time dry-plate photography replaced plates hand coated with collodion, thereby solving some of the chemical restraints on mobile photography.

However, making a photograph was still a cumbersome business. Although some dry plate cameras were explicitly modelled on Colt revolver mechanisms, and cinema cameras looked to machine guns for design elements, there was still a lot of camera equipment to be carried while travelling if one wanted to make images.

After cancelling a trip to Santo Domingo because of the bulk of photographic equipment, George Eastman – later to found Eastman Kodak – resolved to produce something simpler.

Eastman partnered with William Walker, the first camera maker to use manufacturing methods pioneered by gun makers to permit interchangeable parts. But it was their use of chemistry that provided both the greatest breakthrough and the clearest link with gun technology.

Eastman and Walker developed a paper negative that used guncotton. A French inventor extended that by creating a gelatinized guncotton that could be cut into strips, thereby also permitting the first modern smokeless gun powder. When the first Kodak was released in 1888 it took 100 exposures on sheets of dry, etherized, guncotton backed up paper.

The next development involved Eastman Kodak’s chief chemist adding amyl acetate to guncotton, creating a stable “celluloid”. A year later two English chemists made the explosive cordite by adding nitroglycerine and acetone to guncotton. As Landau concludes, “breech-loading guns and the Kodak camera not only drew on the same language; they both sealed the same sort of chemicals in their cartridges.”

Have we, in the digital era, freed ourselves from photography’s’ violent genealogy?

About the author: David Campbell is a writer and producer specializing in photography, multimedia, and politics. Visit his website here. This post was originally published here.

Image credit: Cartoon by Jon Kudelka, The Australian, 2004. From a postcard representing ‘Behind the Lines’, a travelling exhibition developed and presented by the National Museum of Australia.

1 This account is taken from Paul S. Landau, “Empires of the Visual: Photography and Colonial Administration in Africa,” in Images and Empires: Visuality in Colonial and Postcolonial Africa, edited by Paul S. Landau and Deborah D. Kaspin (Berkeley: University of California Press, 2002), pp. 146-49. ^