On the same day I was experimenting with the light painting I described in a post yesterday, I also fiddled around with long exposure portraiture. I had my buddy Aaron pose for me at his desk in near darkness. The only sources of light in the room were his laptop screen, a few LED flashlights that I placed on his desk in various directions, and a lighter that Aaron held in his hand. 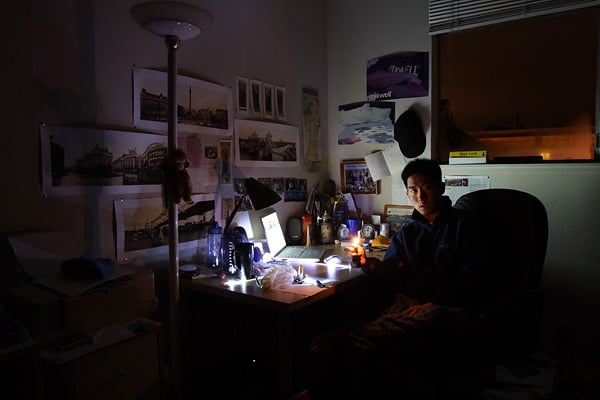 It was taken with a 10 second exposure at ISO 100. It was probably a mistake to use such a low ISO, since I could have gotten the same exposure with less time if I had used a higher number. Every time the ISO number doubles, the shutter speed is cut in half for the same exposure (assuming aperture is kept constant). This is pretty intuitive, since if you double the sensitivity of your film, you’ll only need half as much time to expose it with the same amount of light.

Keeping the aperture at a constant f/8, here’s what the difference would have been.

Luckily, Aaron was able to hold still enough to not appear too blurry in the photograph, making it acceptable when viewed at a normal web resolution. If it were to be blown up or printed, the faster shutter speed would have helped a lot.

Here’s a crop showing the different small sources of light that I used to illuminate the scene: 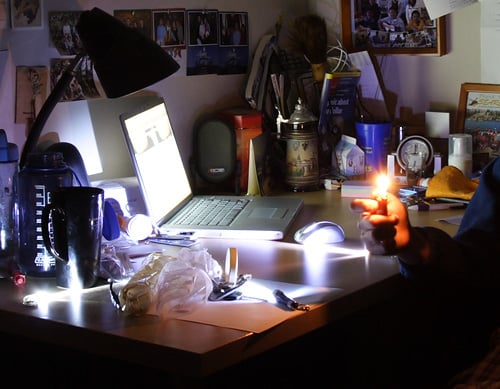 What I found interesting about lighting up the scene this way was that each of the sources of light were a slightly different color temperature, giving the scene an interesting look in terms of colors and lighting.

During post processing, I increased exposure a little, did a little recovery, added a splash of fill light, and pushed contrast up a little. Here’s the final image (hover over it to compare it to the original): 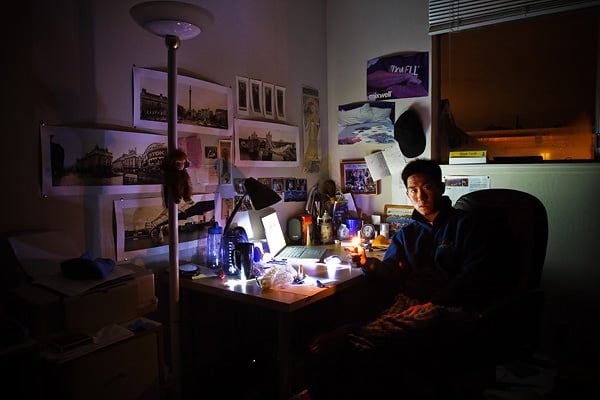 If you’re looking for something new to learn and photograph, try your hand at taking longer exposure portraits with unconventional sources of light. Just find a friend that can hold still!

Painting With Light and Long Exposures

Interview with Jonathan Greenwald of Shrued