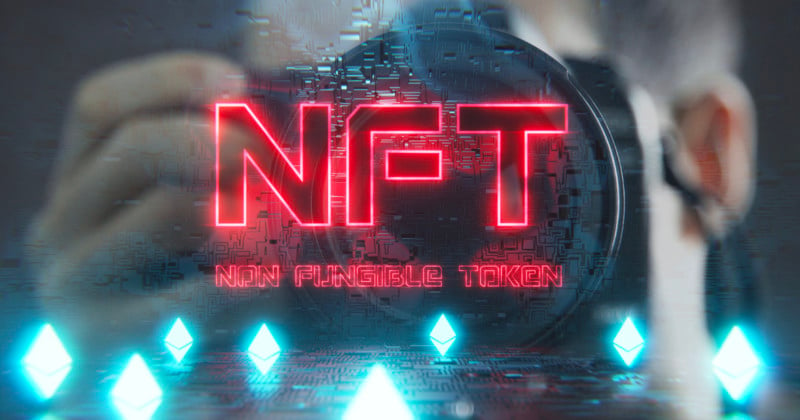 Seemingly overnight, NFTs became the hottest acronym on social media and in headlines. On Thursday, a single JPG file created by Mike Winkelmann, also known as Beeple, sold in an online auction for $69.3 million. It was the first digital-only art sale for auction house Christie’s, meaning there was no physical copy involved.

Regardless of the overnight popularity, NFTs are not new. The current boom, however, is introducing more creators, big and small, to a marketplace where they can monetize their work within the cryptocurrency community.

If you are already lost, and wondering why you should care, you are not alone.

PetaPixel spoke with Donnie Dinch, CEO of NFT marketplace Bitski, and photographer Bryan Minear about what NFTs are, and how photographers can jump in on the craze — and if they should.

What is an NFT?

NFT stands for “non-fungible token” — “non-fungible” means it cannot be exchanged for something of similar value. It is, by definition, one of a kind. For example, you can’t exchange a photograph by Dorothea Lange for another by Annie Leibovitz. They are not the same.

NFTs are verified using the blockchain, which is basically a transparent history of ownership, purchases, and trades that no one can edit and anyone can see. The blockchain ensures there will always be a trace from the current owner to the original creator. Some NFT marketplaces, like Bitski, ask their creators to connect their social media accounts for an extra layer of verification.

“It effectively is a way to own a digital good,” Dinch said. “We look at the blockchain as this global source of truth of who owns what, and the NFT is like an atomic unit of that ownership for individual goods.”

Tokenizing a digital good, like a photograph, is the process of uploading it and placing it for sale. NFTs marketplaces exist within the blockchain, which requires the purchasing of cryptocurrencies, like Bitcoin or Ethereum.

For photographers, after you’ve uploaded your image, there are several verification steps, like if you are selling an original or multiple editions. You can even place a royalty on your NFTs, like 10% of all future sales.

“With respect to photography, you have the ability to tokenize a photograph and whoever owns this token owns this photograph. People can look at it and download it but there is only one owner,” Dinch said.

The aurora is very dear to me and I want everyone to have a little piece of it in their collection. So I minted 100 editions at only 50$

How Do You Buy an NFT?

“In order to buy an NFT you will need a currency for whatever blockchain that NFT lives on,” Dinch said.

Bitski, however, allows creators to sell NFTs with a bank account, and people can purchase those NFTs with a credit card — no knowledge of cryptocurrency needed.

There are several NFT marketplaces, the largest being OpenSea and KnownOrigin. NFTs can be bid on or bought for an established price.

What Do You Get When You Buy an NFT?

A couple of things. First and foremost, you get ownership of that digital good — ownership anyone on the blockchain can see.

NFT collectors don’t seem to care about exclusive access to content, according to Dinch. Sure, digital goods, like photographs and gifs, can be right-clicked and screenshotted by anyone on the internet, but the “emotional value” is a lot higher than a “physical representation.”

“Let’s say you get really old and you’re just like, ‘I’m going to get my name on a bench in Central Park,’” he said. “Anyone can still sit on that bench, but they will know that it’s yours.”

First NFT ever, would love for y'all to check it out! I am stoked to be a part of a new and emerging art market, and, in my opinion, a part of history. Thank you to @claycookphoto for the invite!

How Can Photographers Use NFTs?

Bryan Minear, a landscape photographer based in Michigan, has always kept a close eye on the crypto space. On Tuesday, he did an NFT drop with Bitski featuring five photographs ranging from $200 to $2,500. Within 10 minutes, he sold out of nearly everything.

“I was crying by the end of the day,” he said. “It’s not like a life-changing money, but at the same time, when you go so long just creating for the love of it, and then you finally have that moment of validation, like somebody loves your work that much they’re willing to spend some money on it, it’s kind of incredible.”

Minear said the reason he chose to embrace NFTs was when he realized crypto was “here to stay” — despite speculation that the NFT market is a bubble at risk of popping.

However, he doesn’t see NFTs as a way to eliminate the potential of copyright, or the blockchain as a way to control the dissemination of his work online, but as a new opportunity to reach an audience that is passionate about digital art and willing to pay for it.

“I think that the biggest reason is that you can monetize yourself easier,” Dinch said. “There’s a market for photography, but with the proliferation of things like Instagram, where a lot of photographers are putting out incredible content and getting tons of likes, but haven’t been able to convert that into paying rent.”

How Do Photographers Determine the Value of an NFT They Create?

This was one of the biggest obstacles for Minear before he listed his NFTs on Bitski. Creators determine the price of NFTs on their own. Minear said he initially listed his photos at a lower price point so that they would be accessible, but once they quickly sold out, he realized he didn’t have enough “reference points” to make a more informed judgment.

“I didn’t have a whole lot to go on as far as pricing was concerned,” he said.

How Do You Sell an NFT?

NFT creators often tap into their already built-in audiences to find buyers. Whether that be social media or friends and family. But some NFT marketplaces like OpenSea and Bitski regularly feature creators, similarly to Etsy and Shopify, where you can filter and search for specific goods within categories.

What is the Difference Between Selling Multiple Versions of an NFT and Selling Limited Edition, Physical Prints?

The biggest difference between selling a limited edition hard copy of a photograph versus multiple versions of the photograph as an NFT is tangibility.

For Minear, it also comes down to what his audience values. A physical poster on a wall? Or digital ownership?

“Within three hours in NFTs, I sold twice what I’ve made in limited edition print sales in the last four years,” he said. “I tried everything from limited signed edition prints, and unlimited downloads, and nothing really caught traction. There’s something intriguing to me about just one of my things existing. The rareness factor of NFTs is what’s appealing to me.”

What About Copyright and Licensing?

The kinks are being ironed out as even though the concept of an NFT is not new, the space still is and expanding rapidly. NFT marketplaces are bound to have their own rules regarding copyright and licensing, but as far as it goes now, the seller should be very clear on what they are selling.

Linkin Park’s Mike Shinoda, who released a single via NFT, told Input Magazine “nobody who is serious about NFTs who really humors the idea that what you’re selling is the copyright or the master.”

However, people can create NFTs of works they didn’t personally create, which brings up a whole slew of other issues for which there are no solid answers yet.

Last one for awhile. I just listed an old photograph but a piece quite special to me. “Metanoia” is now for sale on @withFND! https://t.co/qaMirikMg9

What are the Risks of NFTs and Photography?

For Minear, the biggest risk for photographers looking to enter the NFT market is the barrier to entry regarding understanding cryptocurrency.

Dinch doesn’t think there will be a “boom or bust” cycle with NFTs as many are suggesting. What is unsustainable in his mind, though, are “the big drops” — like musician Grimes selling art for $6 million and a gif of LeBron James, which recently sold for $200,000. Twitter CEO Jack Dorsey listed his first-ever tweet as an NFT and its current bid is at $2.5 million.

While it may seem like big names are the only ones benefiting from NFT, Dinch believes it’s the small creators who will see the greatest success over time.

“Crypto sh*tting the bed is not going to affect NFT sales for photography in my mind,” he said.