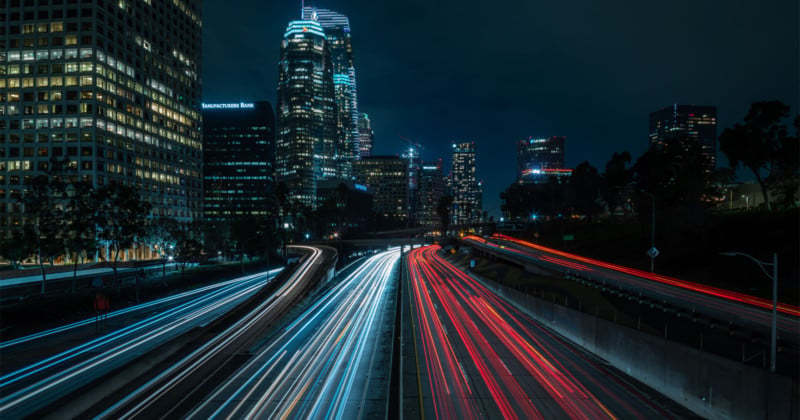 Never take a blurry city twilight shot again! If you follow these tips, techniques, and gear recommendations, you’ll never be disappointed with your cityscape photos again.

As the light fades and those twinkling street lights and office blocks start to switch on for the night, it’s a captivating sight and definitely one of the more photogenic aspects of city living. However, photographing in low light is hard. It’s hard to see, hard to focus your camera, and hard to compose a shot. Cameras don’t like to work in the dark — after all, they’re designed to capture light — but there are some key techniques that will help.

Deciding on the right equipment to use for a cityscape photo will help maximize light input, and the camera settings you choose also play a huge role in whether it’s possible to handhold or if you need to shoot with a tripod. Location and time of year make a dramatic difference to the style of the cityscape, too. So let’s take a look at what we can do to make the best of our low light cityscapes.

The Best Equipment for Low-Light Photography

Proper equipment choice is essential if you want to capture good low-light photos. Choosing camera bodies or lenses not suitable for low light photography may result in a lack of decent images, so there is preferred equipment we should consider as the best kit for low light cityscape photography. 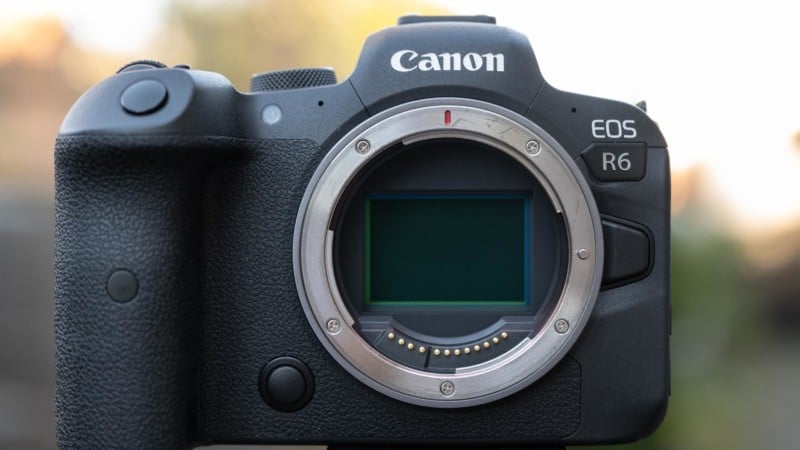 In terms of a camera body, we should ideally be looking at a camera with a full-frame sensor. The larger size of a full-frame sensor can capture more light and produce better exposures in situations where light is scarce. Not only that but larger sensors, generally, produce lower image noise which can become a problem when needing to boost ISO due to low light. A camera with a decent ISO range (especially one that handles high ISO noise well) is ideal and will make low-light shooting handheld easier (as we’ll see below). Some cameras have in-body image stabilization (IBIS) and come in varying stop amounts and roll axis capability. Don’t worry too much about the numbers for image stabilization for now, essentially: the higher the number, the better for our situation.

If you don’t want to spend the extra money that full-frame sensors usually require, just go with as large a sensor as you can that fits in your budget. In descending order (and looking past the very expensive medium format size), it goes full-frame, APS-C, Micro Four Thirds (which is very similar to Super35), 1-inch, and then fractions of an inch. Those extra-small sensors should be avoided, if possible. 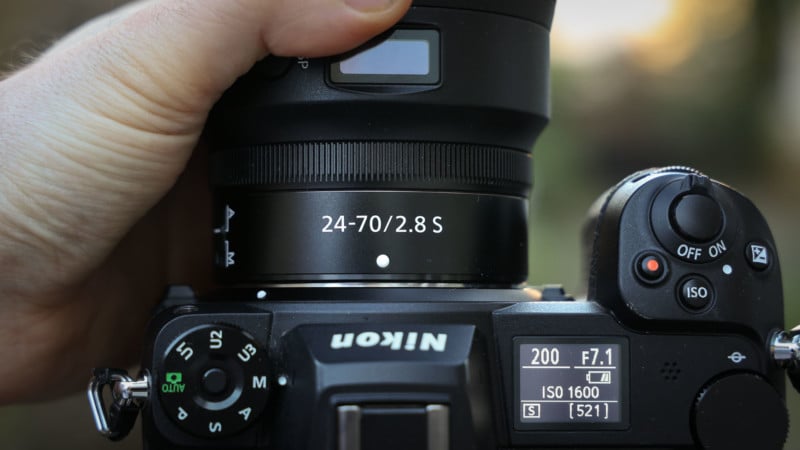 Lenses should have fast maximum apertures to let in as much light as possible: that means f/2.8 and below (f/1.8, f/1.4, etc.) are ideal. The wider the aperture, the bigger the hole and the more light that passes onto the image sensor. Lenses may have image stabilization (IS) too, and this really helps when it comes to shooting low light cityscapes handheld. Confusingly, not all manufacturers use the same name for IS. Nikon uses Vibration Reduction (VR), Sony use Optical SteadyShot (OSS), and so on, so make sure you find this on the lens you’re using. Some cameras can combine in-body image stabilization with stabilization found in the lens for enhanced stabilization which is the best for this kind of low light shooting.

Filters are largely unimportant for low-light cityscapes, but Starburst filters can be used to transform light sources (such as street lights), into aesthetically pleasing star-shaped bursts of light (hence the name). Though, this look is subjective, and personally, I’m not a big fan. But beauty is in the eye of the beholder!

Use a tripod, or rest the camera down on a bench or a rock to keep the camera completely stationary during the exposures. If there’s nothing suitable around to place the camera on then use the image stabilization in the camera or lens to shoot handheld. Try and push the ISO as high as possible in order to speed up the shutter speed to reduce camera shake blur.

Make sure the tripod legs and head you choose can sufficiently support the weight of the camera and lens or you run the risk of the camera slipping or toppling over. 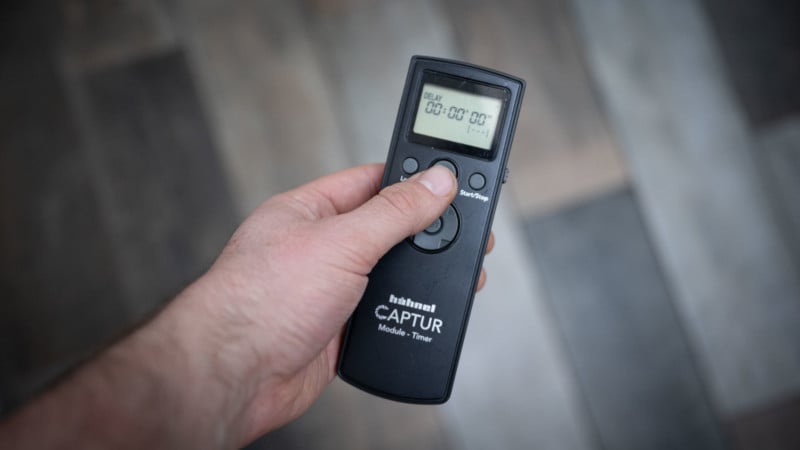 An external shutter release may also be useful to trigger the camera while it’s on the tripod. Touching the camera even for a second during a long exposure introduces tiny vibrations which can incur camera shake and therefore blur. Wired and wireless options are both acceptable, some cameras will accept wireless triggering via Bluetooth or WiFi connections with a smart device, too. 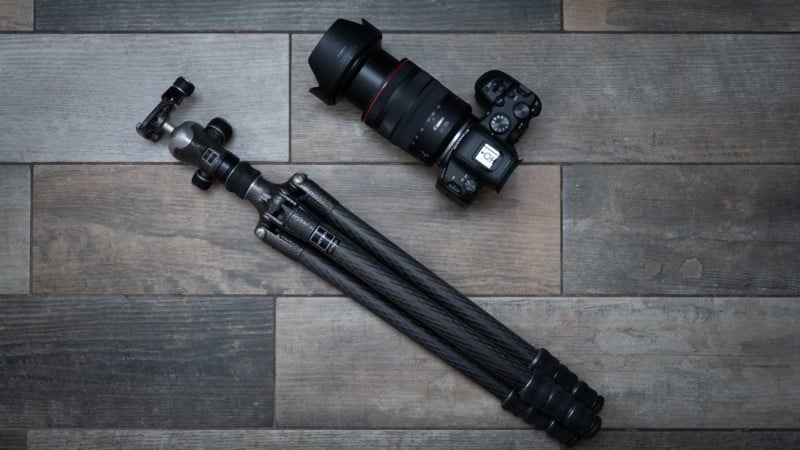 Dialling In the Most Useful Settings On a Tripod

Tripod settings will be different to handheld settings because in one case the camera is completely motionless, whereas in the hand the camera will waiver slightly no matter how steady your hands are. When on a tripod, we have more control over the creative aspects of photography. That’s because there’s no issue with camera shake blur, so we can prioritize depth of field through the changing of the aperture and use long exposures with longer shutter speeds, all while keeping ISO to a minimum, thereby retaining optimum dynamic range and reducing image noise.

There are some who prefer to turn off lens image stabilization when shooting from a tripod because it can get confused and introduce camera shake blur. However, more sophisticated lenses have a built-in mechanism to identify when it’s on a tripod and will automatically switch off without manual input. You can see if your lens has the ability to do this by checking its manual.

When shooting handheld in low light, we’re basically fighting a losing battle because there is so little light that we need to extend the exposure time and therefore introduce more chances our arms will shake. Doing so increases motion blur and, while shooting handheld, this is going to incur camera shake blur because we can never keep absolutely still. While we cannot overcome the movement entirely, we can win some of these battles through camera settings. 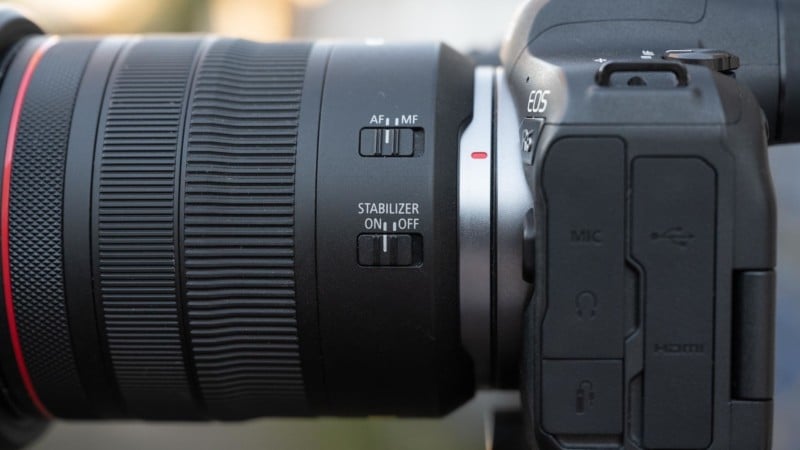 Essentially, we have to keep the shutter speed as fast as possible in order to reduce camera shake blur. To do this, it’s a good idea to open up the aperture as wide as possible to maximize the light passing through onto the image sensor. However, wider apertures bring a shallow depth of field, so this must be balanced with how much depth of field we’re willing to lose. 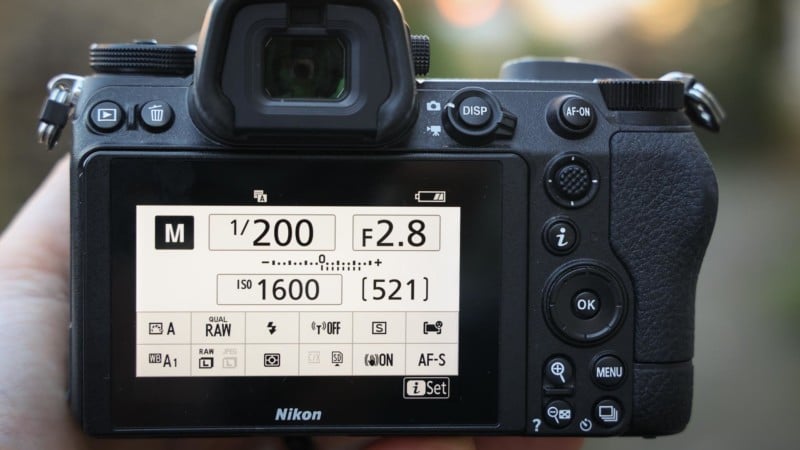 The next step is to engage any kind of image stabilization (IS) possible to counteract the movement. Then we should look at ramping up the ISO sensitivity as high as is bearable. High ISOs introduce image noise, so ideally this should be kept at a minimum, but when a faster shutter speed is our priority we have no choice but to crank this up as a last resort.

While autofocus (AF) is tremendously helpful for daytime shooting, in situations with low light it can struggle. Some camera models are better than others, and the minimum autofocus detection exposure value is listed in the technical specifications of any given model, with some now autofocusing down to -6EV and greater. However, if the AF “hunts” when shooting, it might be best to turn to manual focus. 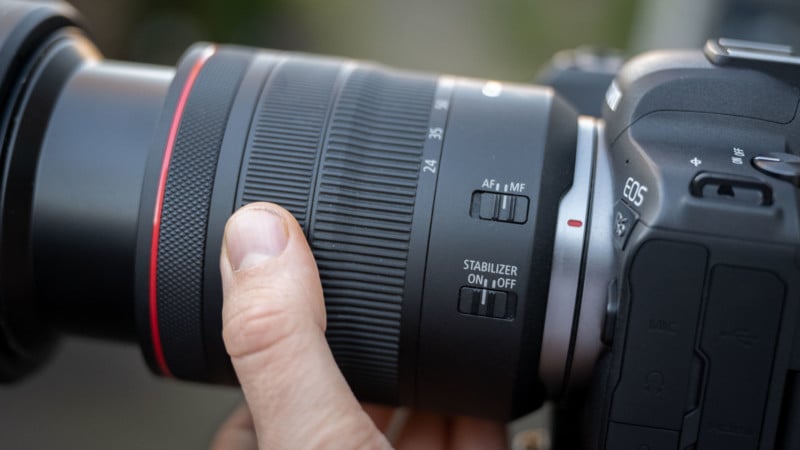 Engage manual focus either on the lens or the camera body, then switch to live view on the rear screen. Digitally zoom in to a bright subject such as a street light and manually adjust the focus ring until a small pinpoint of light is achieved. Rock the ring back and forth a little until the sweet spot is achieved. Then take care not to knock the ring, (it happens).

Composition is so subjective that there are an infinite amount of ways to frame a scene. However, in this example, we’ll take a look at shooting across a city to get a wide view of the rooftops and street lights. In this situation, it’s important to get up high, either by gaining permission to photograph from a tall building or by heading up a nearby hill with a clear view of the city.

One way to compose the frame is to look for landmarks that can act as an anchor point for the rest of the scene. In the example below you can see a church whose spire stands out against the surrounding, lower buildings. 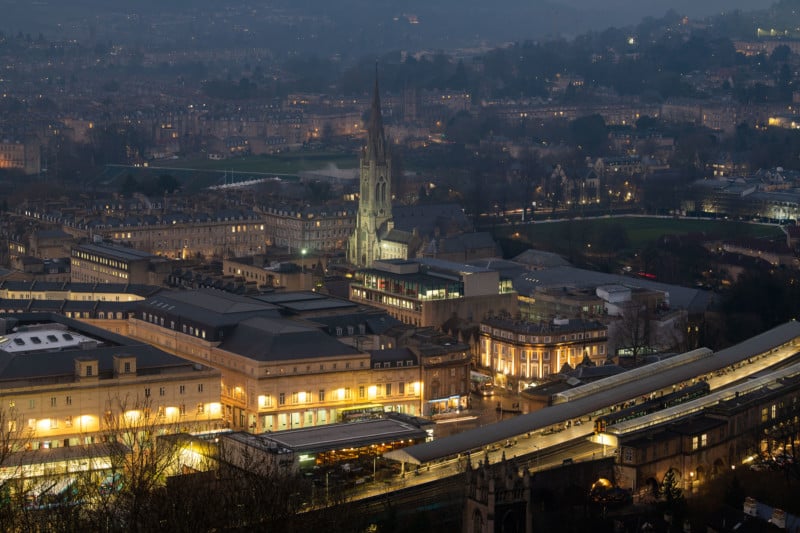 It’s also important to think about the visual weighting of scenes. Bigger and darker subjects will produce a greater visual weight and can distract from other nearby, smaller subjects. Try to balance the scene with both light and dark patches and avoid placing the brightest subjects towards the edge of the frame. Other compositional techniques that may help are the rule of thirds, where we place items of interest in and along the third grid lines (most cameras have the option to engage this on the rear screen). Leading lines can help draw a path of visual interest through the scene, with the main subject at the end of the line to punctuate where the eye should stop.

Twilight is great for getting light in the sky and shooting street lights switched on. This can be in the morning or the evening and can be tracked either visually (by checking the sunrise and sunset times from looking out the window) or using a weather app, website, or photography-related smartphone app such as PhotoPills. 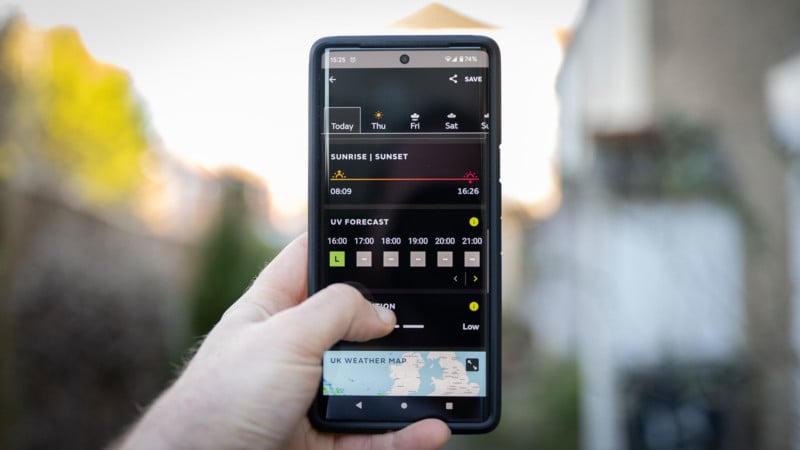 If aiming for traffic light trails during long exposures, aim for an evening shoot as, depending on the time of year and the location, there’s likely to be more traffic during the evening because work start times vary.

Find a spot with a busy street, perhaps with a turn in it to get flowing light trails and ensure the camera is set with a longer exposure of several seconds. If the photo now becomes overexposed then drop down the aperture or ISO sensitivity to suit. Should this not be possible, a neutral density (ND) filter can darken the frame uniformly to allow sufficient exposure length. 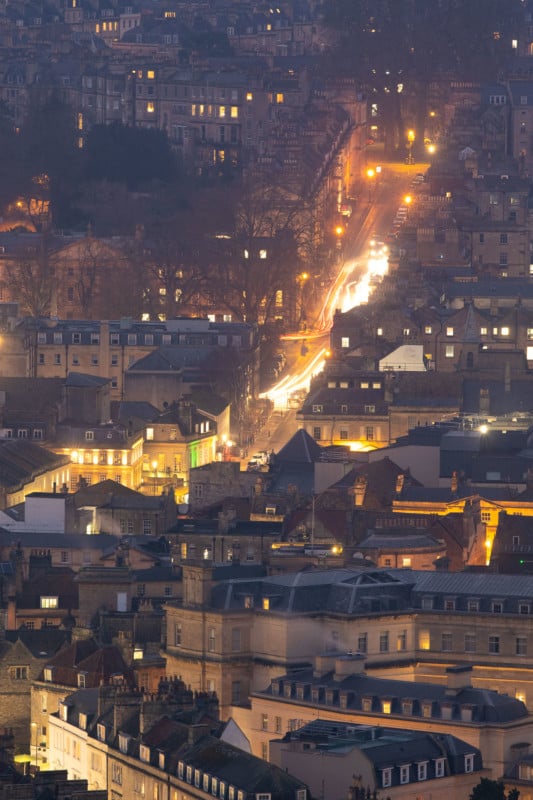 Sunrise and sunset change every day and can alter dramatically throughout the year, so make plans to revisit locations to capture different looks. Here in the United Kingdom, for example, I can’t shoot a low light cityscape in July because we don’t even experience night in the height of summer. By contrast, though, it gets dark at around 4 PM in the winter.