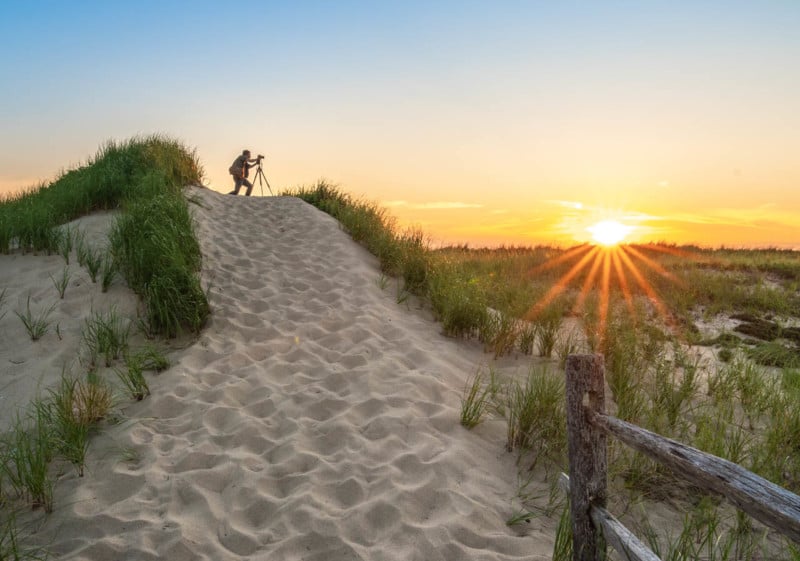 The rule of thirds is widely considered to be one of the most important first techniques you can learn to create better compositions and help you progress from “taking pictures” to “making photographs.”


Don’t let the name throw you, though. It’s not really a rule. It’s a guideline or principle for composition that’s been used by artists for a long, long time. It works for landscapes, portraits, wildlife, and every other type of image, even abstracts. Not every picture has to use the rule of thirds, however, but it’s a great place to start when you are looking through your viewfinder and wondering what to do next.

What is the Rule of Thirds?

So what exactly is the rule of thirds?

According to the rule of thirds, you should put your primary subject on one of those points (or along one of the lines).

In general (everything is “in general” because there are always exceptions), using the rule of thirds will help you create a pleasing, well-balanced image. It’s a way to give your main point of interest special emphasis, marking it as important. It feels natural and harmonious, whereas placing the main subject smack in the middle of the image can feel unbalanced and boring.

How to Use the Rule of Thirds

It’s pretty simple, really. Just place your subject – whether it’s a person, flower, animal, building, etc. – on one of the rule of thirds points or lines. It works for horizontals and verticals.

When photographing faces, flowers, cars, and anything else that can point, it helps to have them looking into the frame and leading the viewer into the image rather than pointing out of it. Again, it’s a general principle and there are many successful images that do the opposite. For portraits, place the eyes on the upper line.

The rule of thirds often goes hand in hand with the concept of negative space. For example, when photographing a subject looking either to the left or to the right, it is usually a good idea to place the subject on a rule of thirds intersection point that allows them to look into the open side of the frame. This gives photo “breathing room” and negative space that allows the viewer to follow the subject’s gaze.

When photographing landscapes or other outdoor scenics, beginners often place the horizon right in the middle of the frame, which tends to cut the picture in half and look boring since nothing has emphasis. Instead, try to place the horizon line on either the upper or lower “third” line.

If there’s no clear horizon, look for a leading line or something or things that can imply one, and have it lead to a rule of thirds point with some kind of dominant element like a rock, tree, mountaintop, or even just a bright point.

You don’t have to be a fanatic about placing your subject on the rule of thirds with absolute precision. Just get in the general area. Remember, it’s a guideline and not a rule.

Rule of Thirds Overlays in Cameras

Most cameras and phones have a setting to turn on grid lines to help you compose using the rule of thirds. This makes it easy to just move your camera around until one of those points is on your subject.

To find out how to turn the grid on for your particular camera or phone, read your owner’s manual or do an online search.

This is especially helpful in action or wildlife photography when you may not have time to create an optimal composition. It’s also helpful to go back over old images and see if you can use the crop tool to improve the compositions.

Breaking the Rule of Thirds

As mentioned earlier, the rule of thirds is really just a guideline and there are many times exceptions to it.

Symmetrical subjects, such as round or square objects, often look great in the middle of the frame.

Or sometimes you want to use symmetry to create a sense of balance by having two elements at opposites of the picture.

Some photographers even believe that the rule of thirds is a poor foundation for learning photographic composition because it can straight-jacket your creativity and lead to photos being just as boring and formulaic as compositions in which the subject is dead center in the frame.

So, once you have a solid grasp of the rule of thirds and understand why it can improve compositions, it can be a good idea to then experiment with breaking the “rule” in order to grow further in your ability to create compelling compositions based on each individual scene and subject.

There is Much More to Photo Composition

There are many different guidelines and principles besides the rule of thirds that can help with composition. Leading lines, shapes such as pyramids, symmetry, and the golden ratio are some examples. However, part of the power of the rule of thirds is that it is easy to understand and use and it works. We seem hardwired to like images that use it.

If you are new to photography, using the rule of thirds can help you think more about composing an image instead of just “shooting” a subject. The word “shoot” is an unfortunate term in photography. It suggests we’re supposed to put the center focus point on something and fire away. To be sure, sometimes that can work, but in general (there’s that term again), using the rule of thirds will just look better. Try it. You might like it.

About the author: John Tunney is a fine-art photographer and instructor living on Cape Cod in Massachusetts. His work has been featured in a solo exhibition at the Griffin Museum of Photography and in many solo and group shows in galleries and other exhibition centers. His book, The Four Seasons of Cape Cod, was published in 2016. He teaches programs on Cape Cod, in Maine, and in Iceland.