Photographers have taken to social media to call out the “misleading” images that were used to depict them in the new trailer for Prince Harry’s and Meghan Markle’s upcoming Netflix show.

Netflix released the full-length trailer for the docuseries Harry & Meghan on Monday.

The six-part series will explore the media’s influence on the couple’s relationship with the royal family.

In the trailer, various footage is used to suggest the intrusion of paparazzi specifically into Harry’s and Meghan’s lives.

However, photographers quickly pointed out that several videos that show them supposedly taking invasive pictures of the couple were in fact clips from unrelated news events.

While other clips were taken at official royal events that a small group of accredited photographers had permission to attend.

Several photographers have taken umbrage with the way they have been misrepresented in the Netflix trailer.

News reporter and photographer, Robert Johnson criticized the usage of footage in the trailer that showed photographers leaning over a balcony to shoot pictures of Harry, Meghan, and their baby son Archie.

This photograph used by @Netflix and Harry and Meghan to suggest intrusion by the press is a complete travesty. It was taken from a accredited pool at Archbishop Tutu’s residence in Cape Town. Only 3 people were in the accredited position. H & M agreed the position. I was there. pic.twitter.com/nvjznlloLF

While the video was ostensibly intended as an example of invasion by photographers, Johnson states that it was taken during an official royal event at Archbishop Tutu’s residence in Cape Town, South Africa in September 2019.

Johnson also says that had been there as one of only three reporters who had been permitted to attend the event.

This shot by me @theroyaleditor from the same accredited pool position on my iPhone was taken at Archbishop Tutu’s Cape Town residence. There was no intrusion. I was part of a 3 person UK palace pool. Nobody else was allowed in and we shared the words and photos with the UK Media pic.twitter.com/2wqfnvGjrH

To further prove his point, Johnson shared an “accredited” photo that he had taken of Meghan, Harry, and Archie from the same royal event. “There was no intrusion,” he writes.

‘Not As It Seems’

Other clips seemingly used to demonstrate the aggressive media coverage into Harry and Meghan in the trailer had no links to the couple on at least two occasions. In fact, other individuals were the subject of the photographers’ attention in this footage.

In a voiceover in the trailer, Harry talks about press intrusion and says he is “terrified” that history will repeat itself.

As he speaks, a video of Harry and Meghan walking in front of a barricade as cameras flash and the trailer cuts to footage of a group of photographers rushing to take photographs.

Harry & Meghan’s @netflix doc.
If you’re going to wang on about ‘your truth’ and say the press twisted your story – fine. But don’t go and play fast and loose with news footage to suit your narrative. 🙄
[Spotted by lovely press photographer I know on Insta] pic.twitter.com/fMT2JXpfQi

It may look like the footage of the photographers is related to the firsthand experiences of the couple.

However, journalist Harry Wallop tweeted that his “lovely press photographer” spotted that the video was taken outside of a court as U.K. glamor model Katie Price arrived to be sentenced for drunk driving.

According to Buzzfeed News, this is corroborated by a search of Getty Images video database.

Following accusations of fake footage in the first trailer, the NEW trailer for the @netflix Harry & Meghan documentary appears to use footage of @KatiePrice leaving Crawley Magistrates Court to suggest a mob of paparazzi hounding H&M. #HarryandMeghanonNetflix pic.twitter.com/NFKCedWnK5

In another tweet, freelance video journalist and photographer Urban Pictures UK details how the video of Price had been flipped horizontally for the Netflix trailer.

#SecondTrailerFAIL the paparazzis shot used in BOTH trailers has nothing to do with Harry and Meghan.

Hell, it has nothing to do with the royals! It's "Michael Cohen, Trump's former lawyer leaves for prison term"

Further footage in the trailer shows photographers swarming a vehicle after Harry and Meghan are filmed seated in a car. Meghan is then seen crying after the clip of the horde of photographers.

Although the video may look like the couples are the individuals being mobbed by the paparazzi, the video was actually filmed in May 2019 and shows Donald Trump’s former lawyer Michael Cohen.

The cluster of press photographers shown in the trailer had been trying to take pictures of Cohen, who was leaving home to begin his prison sentence after pleading guilty to tax, bank, and campaign finance crimes.

On Monday, PetaPixel reported on how the previous Netflix teaser trailer sparked backlash after an image that was supposedly meant to show Meghan and Harry being hounded by paparazzi was revealed as a stock shot of photographers taken at the Harry Potter premiere years before the couple met.

The photograph, which appears first under search results for “paparazzi” on the stock image website Alamy, was taken five years before Harry and Meghan were introduced to each other in 2016. 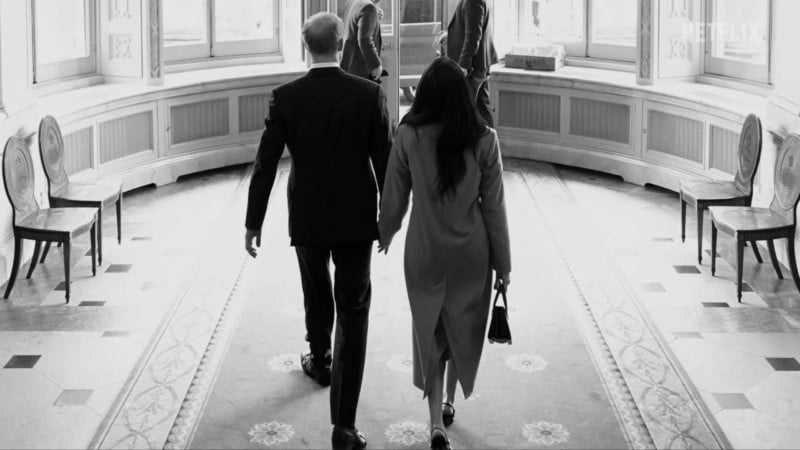 The first trailer for Harry & Meghan also revealed that the couple had broken royal protocol by taking a private photographer into Buckingham Palace without the late Queen Elizabeth’s permission.