DJI’s Mavic 3 lineup has a new family member with the release of the Mavic 3 Classic. The triad of drones in this series now includes the original Mavic 3, the cinema-focused (and aptly named) Mavic 3 Cine, and the oddly named Mavic 3 Classic.

Nearly every other spec is the same between the models and the absence of the telephoto lens brings the price of the Mavic 3 Classic down to $1,495, a $500 savings over the original Mavic 3. 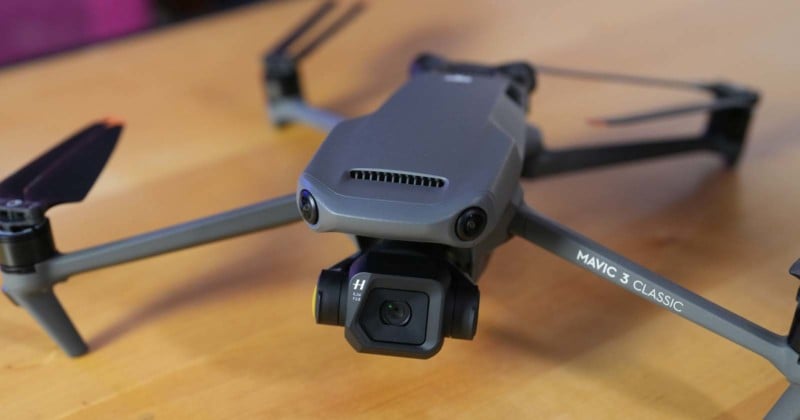 Flight time is claimed to be 46 minutes (in test conditions with most of the features turned off), with a max hover time of 40 minutes while shooting 1080p 24fps (again, in controlled conditions).

While I never got the full 46 minutes during my testing, the 39 minutes I did get still feels excellent. For navigation, the Mavic models use GPS plus Gallileo and BeiDou satellites, which gives them hovering accuracy as precise as 0.1 meters. 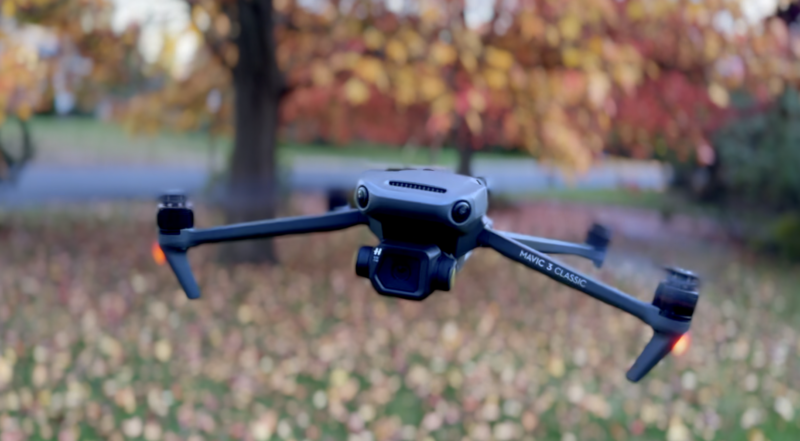 Both units have 8GB of internal storage, while the Mavic 3 Cine model has 1TB of onboard storage to accommodate the ProRes files that the Cine model can record. Obstacle detection and avoidance are identical in the two models, and the 3-axis gimbal has the same range and functionality.

For highly-accurate control, the Mavic 3 line uses the company’s O3+ transmission system, which allows for excellent range before the signal drops and allows a controller to receive 1080 30p or 60p footage for composition and exposure control.

The claimed max transmission distance with no interference is 15 kilometers in the United States (this is lower in other regions, however, there’s no way I’d operate a drone at that distance to test this, especially as a drone has to be in visual range at all times. In conversations with PetaPixel, DJI seems to acknowledge this and the only reason it’s included as a specification is to show the company’s confidence in the signal strength. 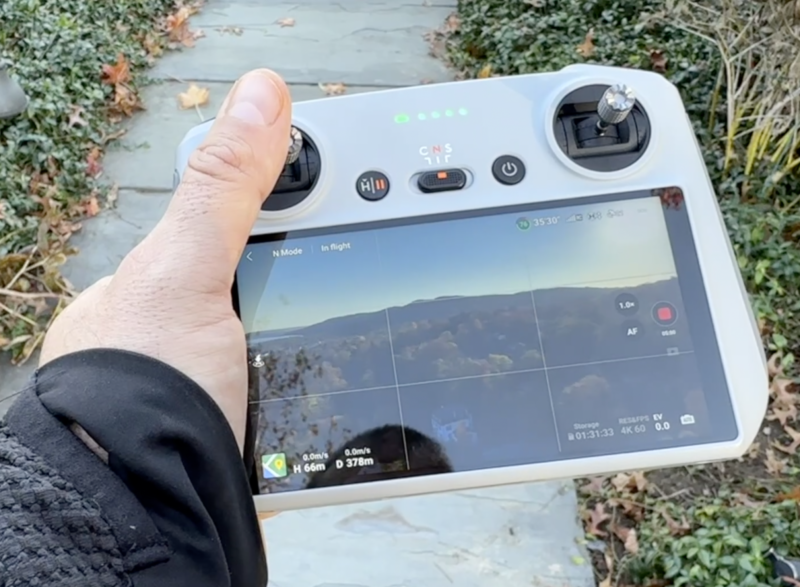 With a spotter, I was able to cross my river, which is about two and a half miles from my takeoff point. I had no issues with transmission in the clear line of sight of an open body of water. With interference, the claimed distance is about 1.5 to 3 kilometers, which is accurate for my testing.

Aside from the lack of a telephoto lens on the Classic, both drone models have the same main camera and lens specs. They use a Hasselblad drone camera (DJI owns a majority stake in Hasselblad) with a 20-megapixel Type 4/3 sensor with a claimed 12.5 stops of dynamic range.

With the elimination of the telephoto camera, it’s harder to get a tight shot. However, the difference in resolution between the Mavic 3 wide and telephoto lens makes up for this a bit.

The most exciting feature of the Mavic 3 Classic is Night Mode. This high-sensitivity shooting has an ISO of 800 to 12,800 and sounds like a gimmick, but in reality, it is the most exciting thing to come to a drone in years.

Night mode video is impressive. Streetlights and the light from houses are enough to illuminate a scene, and there is good contrast between the shadow regions and highlights. 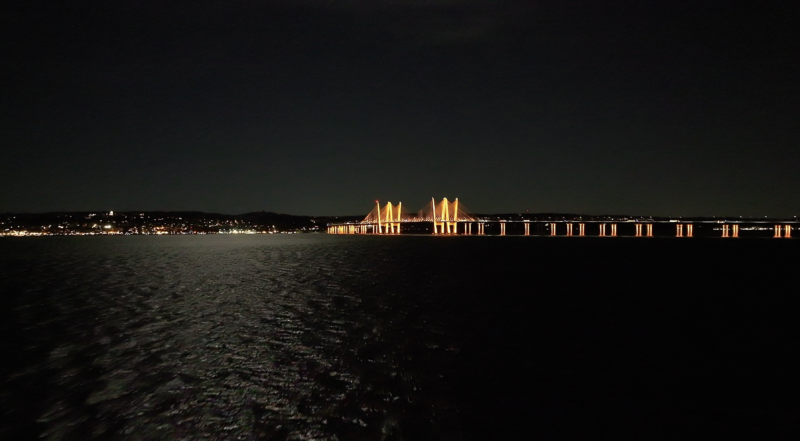 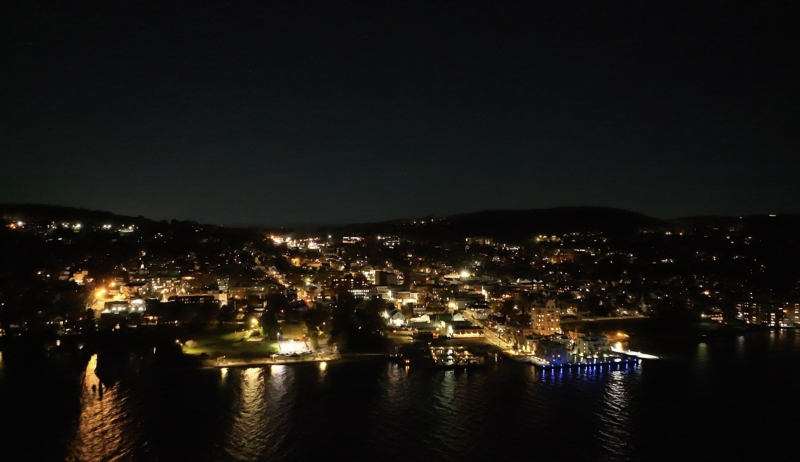 Usually, when the sun sets, so does my drone, but with Night Mode, I’ve found myself launching my drone after sunset more than after sunrise.

Author’s Note: The rules around night flying are different than those of flying during the day, and they’ve changed recently. Please consult FAA guidance before flying at night.

A feature not found on many drones is variable aperture, and it is avaialble on the Mavic 3 Classic. The lens has an f/2.8 to f/11 aperture range, which is incredibly helpful in low-light situations.

You don’t get a lot of bokeh difference when shooting at altitude, but the variable f-stop is very helpful for close-subject shooting. Wedding photographers and real estate photographers will be among those to benefit from the variable depth of field. 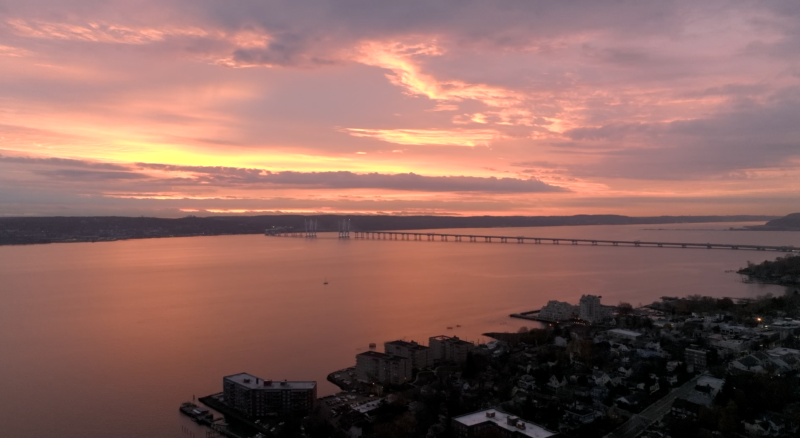 With the variable aperture, I could open up a few stops as the sun would set or stop down as the sun rose and not have to shoot ISO to get the correct exposure.

As an aside, the ND filters and lens adapters that work on the Mavic 3 don’t fit the Mavic 3 Classic, as the front of the camera has been redesigned to eliminate the telephoto lens.

Author’s Note: For more sample video, watch the video at the top of this review.

Video quality is exceptional on the Mavic 3 Classic. As a long-time drone user, I’m impressed by the huge improvement in quality that has come in recent releases.

Even the standard color mode produces vibrant and sharp footage, albeit with less dynamic range than D-Log or HLG. I found normal color useable for anything except sunrises and sunsets, where the high contrast calls for a wider dynamic range.

I found the D-Log footage hard to color grade. The default DJI LUT for the Mavic 3 line wasn’t as good for me as LUTs for other cameras and required a lot of tweaking to the shadows. HLG was much easier to use and only needed minor tweaks to saturation and exposure.

A commercial shooter will want to use D-Log to get the most out of the footage, but for a recreational shooter like myself, HLG is suitable for almost all jobs. 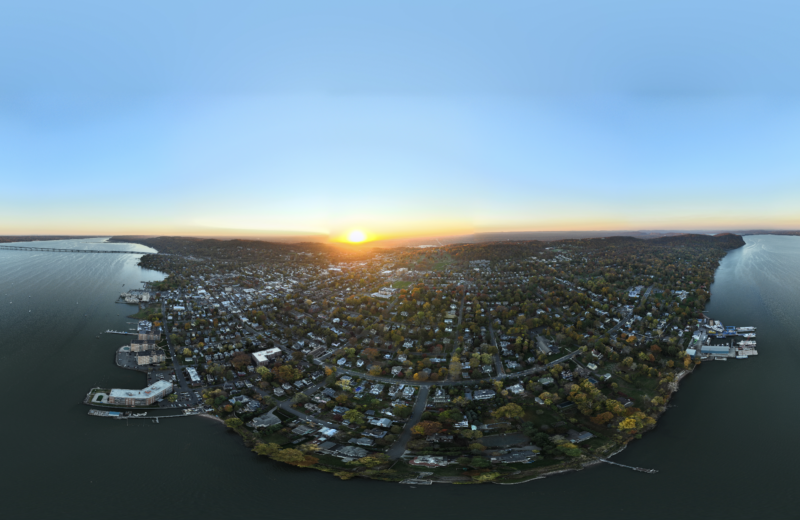 Drone still image quality is often poorer than the video quality, and while that’s true of the Mavic 3 Classic, RAW images from the drone have good dynamic range and quite a lot of detail. Panorama shots showcase the detail the Mavic 3 is capable of capturing and zooming into the images shows off the extreme detail created with these multiple exposure shots.

Tech and Other Features

I’m always impressed with the subject-tracking abilities of DJI’s drones. It seems impossible to me that a drone can track a person accurately from hundreds of feet in the air, and yet it does. I’ve used DJI drones to follow vehicles using subject recognition, and even fast-moving cars are tracked accurately.

My son ran around the yard and the drone followed his every move with active tracking until he disappeared from the frame, even as I changed the drone’s position and elevation.

This sticky targeting allows for the Quick Shot modes in the Mavic 3 Classic, which emulate traditional Hollywood helicopter shots. The Mavic 3 Classic can be set to circle a subject in elliptical patterns, fly rapidly toward or away from a subject, and perform other complicated maneuvers.

My only issue with Quick Shots is that I rarely have enough space to pull these shots off. Most of the effects require the drone to make sweeping arcs in the sky, and where I live, even the tops of mountains have tall trees that get in the way.

Luckily the Mavic 3 Classic has a very advanced object and collision avoidance system and is equipped with sensors that point in every direction. Some of DJI’s earlier drones and some less expensive models lack full 360-degree sensors and are prone to running into trees and other objects while using Quick Shots. That’s not the case here.

With the Mavic 3 Classic, any time I try to execute a Quick Shot and a tree is in the way, the drone comes to a complete stop.

For normal flying, the Mavic 3 Classic can be set to either stop at an obstacle or navigate a path around it. It’s fun to pilot a drone through a stand of trees and watch it circumnavigate one, though in my test, this only works with a sparse stand of trees.

As a test of collision avoidance, I had my son fly the drone at me at full speed, and I watched with mild panic as it bore down on me but then was relieved when it came to a complete stop a few feet away from my body. It felt like one of the videos where a manufacturer of bulletproof vests proves it works by having someone shoot them in the chest. 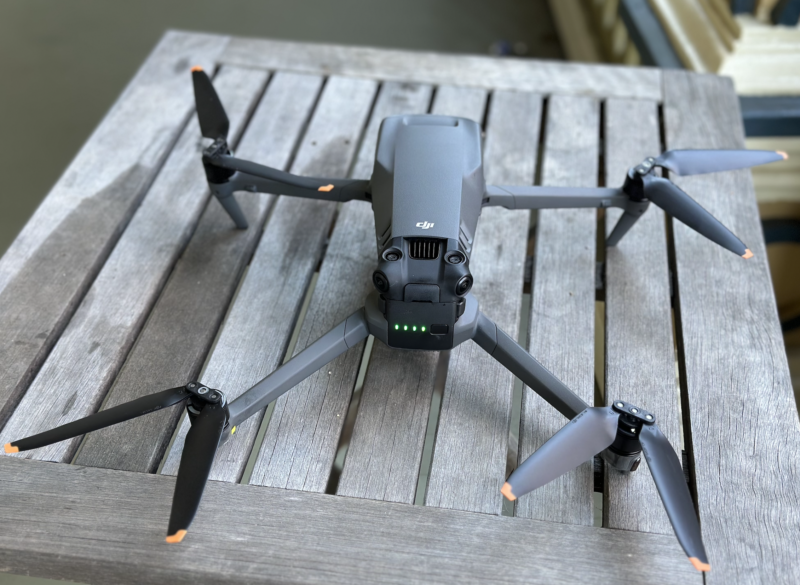 The Mavic 3 Classic also has Cruise Control, which, as the name suggests, allows the operator to set the drone in a direction or a flight path and maintain that path without needing to operate the controls. This is similar to marking a course on the map, with the exception being that it can only be a straight line or can only be a specific turn or pivot.

To enable Cruise Control, it’s necessary to program one of the control buttons to activate and deactivate it. Once I set this, a single button tap maintains the drone’s path.

This feature worked perfectly for low-flying shots over the river toward a landmark. With the drone flying at a fixed speed and elevation, I could capture incredibly smooth footage without having to set the drone on Cine mode.

For slow circular pans around the horizon, I used Cruise Control to maintain a smooth rotation by moving the control stick a small amount and then tapping the custom button. This feature eliminated the occasional jitter or speed changes from manual control that ruin a good pan.

The Mavic 3 Classic can be purchased in configurations with and without a controller. This is smart as many drone operators are on their second, third, or fourth drone and likely already have controllers and would very likely happily pay less to use equipment they already own.

The RC is the best controller for the Mavic 3 Classic. The built-in screen is bright and accurate, and with internal antennas, the controller is less cumbersome (and less prone to breaking an antenna in a camera bag) than other controllers. 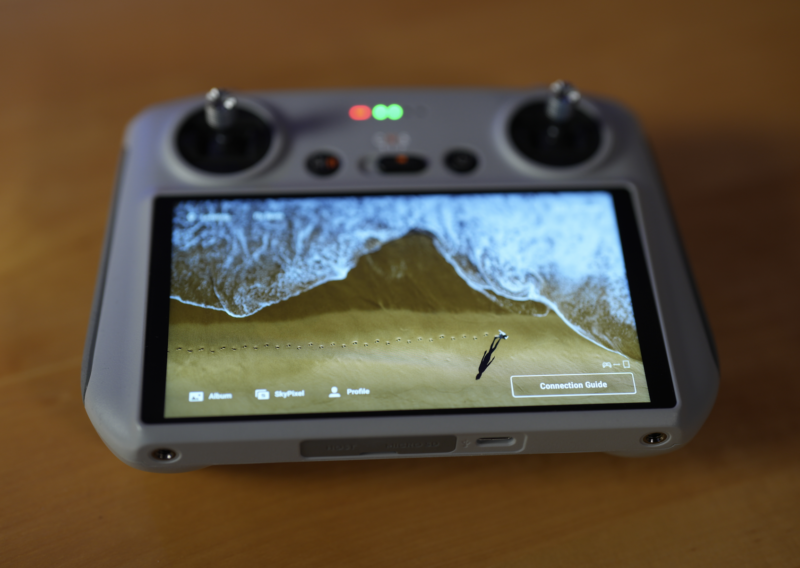 With DJI’s controllers that rely on a smartphone to operate the drone, I’ve had the connection to the drone die when the Lighting cable has come unplugged, and I’ve accidentally dropped my phone from the controller more than once.

The Most Compelling Choice in DJI’s Lineup

For me, the Mavic 3 Classic is the most compelling choice in DJI’s lineup and the top-performing drone that’s in line with the needs of most drone users. 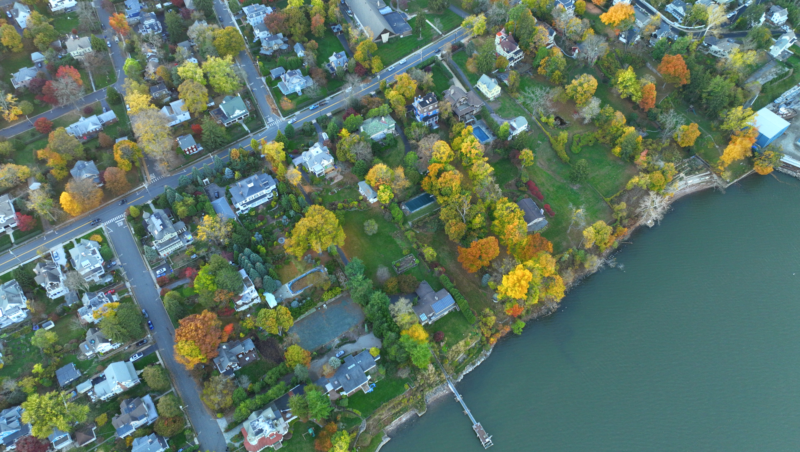 All of DJI’s drones now provide excellent video and still quality, though with varying degrees of performance. For those that prioritize a small size over the features of the Mavic 3 lineup, the DJI Mavic Mini and DJI Mavic Air 2S are less expensive than the Mavic 3 Classic and are also much smaller.

Yes, if you don’t absolutely require a telephoto lens on your drone. If you’re willing to crop a bit to get closer footage, the Mavic 3 Classic is by far the best choice. If you need ProRes support to match footage for a movie or TV shoot, then the Mavic 3 Cine is still your best bet.

Disclaimer: David Schloss was formerly in charge of media relations for Sony’s Alpha Public Relations agency. While this makes him more familiar with the system, his opinions are his own, are backed by PetaPixel’s editorial team, and are not swayed either for or against the company. Previous to his time with Sony, Schloss racked up more 20 years of journalistic experience and he takes his integrity seriously