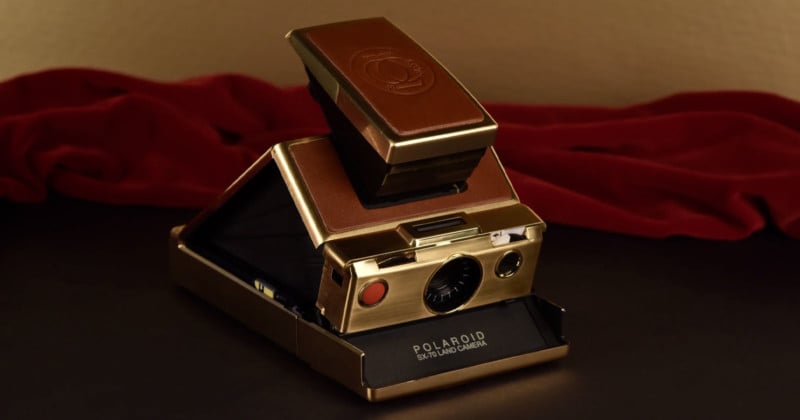 The company, which previously has released both Pepsi and Barbie-themed cameras, says that each Anniversary Edition camera is built using components from vintage Polaroid SX-70 cameras that have been “completely deconstructed and restored.” The exterior is then plated in 24K gold and individually numbered as part of an extremely limited run of 50 total fully-functional cameras. “The cameras are then reassembled with the freshly refurbished internals and finished with the application of new, genuine leather coverings embossed with the anniversary emblem and individual unit number. After being calibrated to ensure their functionality for another lifetime of use, they are encased in special 50th Anniversary Edition packaging.” The company says it is honoring this particular camera because of its history and the impact it had on both photography and popular culture.

“On stage at Polaroid Corporation’s annual company meeting in 1972, founder Edwin H. Land pulled a folded SX-70 camera from his suit pocket, opened it up and took five pictures in ten seconds. This was the world’s first introduction to instant photography as we know it today. While Polaroid had been making instant cameras and film for decades prior to the release of the SX-70 camera, the new device was an engineering marvel at the time of its release,” Retrospekt explains.

“It was a single-lens reflex (SLR) camera, it automatically ejected photos and it folded down allowing it to fit into the inner pocket of a suit coat — all firsts for instant photography. It was also the first to use integral instant film. Development was completely self-contained within the photo’s white border; the same white border now considered the quintessential icon of instant photography.” This is not the first time the SX-70 has been offered in a gold plating. Retrospekt says that a small number of gold-plated cameras already exist as they were occasionally given out as gifts to Polaroid employees for particular work anniversaries or company milestones. They are very rare, however, and are highly desired collectibles.

The Retrospekt-restored Polaroid 50th Anniversary Edition Gold SX-70 Instant Film Cameras are available starting today for $999 until the stock of 50 cameras sells out.