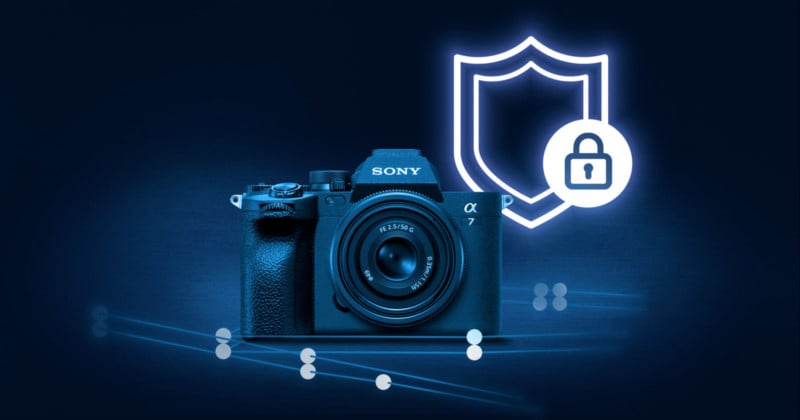 Sony has announced the availability of its in-camera forgery-proof photo technology that cryptographically signs photos at the point of capture which allows photographers to detect if the image is manipulated or tampered with down the line.

The tech, which is aimed at corporate business uses, uses digital signatures that are processed by the camera at the point of capture and allow photographers to detect if any modifications have been made to an image and, as the company says, thus protect them from fraudulent usage.

The company says that this technology was developed in response to what it calls “widespread issues” with unauthorized editing and “misconduct” around digital photo data. The forgery-proof technology is based on standard cryptography and when activated, images are immediately processed with a unique signature by the camera’s processor.

“Following this, any pixel modification, tampering, or potential forgery will cancel the image signature, as the image manipulation will be detected by the customer’s own certificate server during examination,” Sony says.

The company adds that this new forgery-proof signing method ensures the secure creation and transmission of images. Sony argues that the technology is particularly useful for passports and identification verification, but goes further in tacking image manipulation in the media, medical, and law enforcement fields. It adds that the insurance and construction sectors could also use it as a secure way to inspect and record damage.

“It is Sony’s mission to strengthen business solutions with cutting-edge imagery technology and our in-camera digital signing is a real gamechanger for combatting image manipulation and forgery across multiple industries,” Yasuo Baba, Director of Digital Imaging and European Product Marketing at Sony, says.

“Whilst appropriate adaptations for each industry need to be made, the digital signature is multilingual and can be used internationally, enabling organizations worldwide to streamline mandatory image signing with Sony technology.”

Sony joined the Coalition for Content Provenance and Authenticity (C2PA) earlier this year. C2PA is the standards body dedicated to content authenticity that is addressing the prevalence of misleading information online, which has goals similar to those Sony positions its new technology as answering. That said, Sony’s announcement makes no mention of C2PA.

At launch, this technology is only available on the Sony Alpha 7 IV camera and subject to receipt of a license to enable Sony’s signing mode, the price of which was not revealed and is only available to business users. Sony says that it has plans to expand support for this new crypto signature to other cameras, but did not provide specifics or a timeline for said rollout.