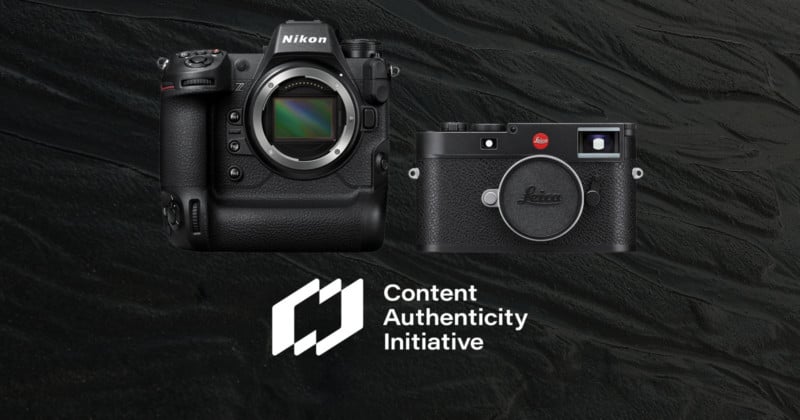 Adobe has announced a partnership between the Content Authenticity Initiative (CAI) and both Leica and Nikon which will allow the two camera companies to implement image provenance technology into two cameras: the M11 and the Z9.

The CAI says that this initial camera implementation will allow photographers to increase trust in their digital work by securely attaching provenance information of a photo at the point of capture, including when, where and how each image was captured.

A photo’s “provenance” refers to a piece of digital content’s facts — in this case, photos — regarding its origins and has been the major focus of the CAI in its attempts to restore trust in images seen online. The organization says that these details, which will be embedded in the image file at the point of capture on these two cameras, establish an image’s attribution and trustworthiness from the start, which helps protect against the spread of misinformation by empowering consumers to identify the origins and edit history throughout the digital content lifecycle.

Last year, Adobe added a way to add content credential information into photos that were edited in Photoshop, but this partnership with Nikon and Leica takes that a step further.

The CAI was originally founded by Adobe and continues to be led by the California-based software giant. The initiative now includes more than 800 partners which work together to increase trust online through provenance. The CAI also authored the Coalition for Content Provenance and Authenticity (C2PA) which is a standard that is being implemented in cameras for the first time, which the CAI says is a major step towards establishing trusted content and properly attributing creators for their work.

“For over a century, the Leica brand name has been synonymous with authentic images and cameras that have produced countless iconic photographs. Leica’s existing membership in the CAI and today’s extended partnership are broadening CAI’s reach to even more creative professionals and artists,” Leica says.

“The Leica innovation and development team recently implemented the C2PA standard in a Leica M11 Rangefinder camera to demonstrate the new provenance technology for the first time. Each image is provided with a forgery-proof signature that documents essential information, such as camera model, manufacturer and image content. This ensures an unbroken chain of authenticity from capture to completion.”

The first Leica cameras with the C2PA standard are planned to ship in 2023.

“As a leader at the forefront of innovative photography and the first camera manufacturer to join both the CAI and C2PA, Nikon’s use of CAI technology will accelerate implementation of the provenance technology for millions of creative professionals,” Nikon says.

“Nikon is exhibiting the Nikon Z9 specially equipped with its image provenance function, which conforms to C2PA standards and was developed in collaboration with the CAI. Nikon also leveraged the CAI’s open-source toolkit to implement this provenance function. Nikon is developing the C2PA provenance functionality for a future camera model.”

Nikon did not specify a date for when the CAI tech will be available in current Z9 cameras.