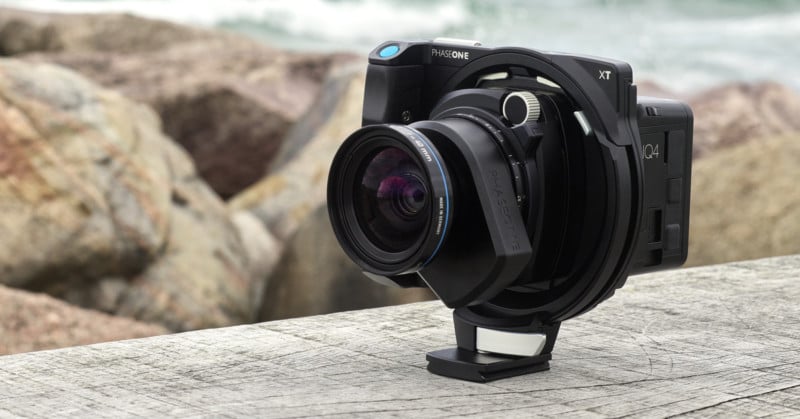 Phase One has announced a new specialized lens for the XT IQ4 camera system: the XT-Rodenstock HR Digaron-W 40mm f/4 Tilt. The optic is designed to support landscape photographers and will retail for $11,990.

The XT camera system was originally announced in 2019 and Phase One called it the smallest digitally integrated film camera ever made. Like most of Phase One’s medium format camera systems, the body and the back — which holds the sensor, computer that powers it, and the touchscreen that operates it — are separate and allow photographers to pair different color or black and white sensors for their specific needs. The digital back that pairs with the XT body can be any of the IQ4 digital backs built on the Infinity Platform: the IQ4 150MP, the IQ4 150MP Achromatic, or the IQ4 100MP Trichromatic.

Phase One says this new lens introduces a simple tilt design that allows photographers to adjust the focal plane, control depth of field, and improve sharpness in images. The company says that the XT-Rodenstock HR Digaron-W 40mm f/4 Tilt is like the other lenses designed for the XT system and offers “outstanding sharpness and unbeatable image quality.” The lens has an aperture range of f/4 through f/22, features a 90mm image circle, and a filter diameter of 67mm. Phase One did not specify the number of lens elements or if any special lenses were used in its construction.

The XT was launched with three lenses and with the new 40mm Tilt, that number has expanded to six. The XT-Rodenstock HR Digaron-W 40mm f/4 Tilt will be available starting in September for $11,990.

In addition to the new tilt lens, Phase One also announced that the Phase One X-Shutter is available for the Rodenstock HR Digaron 138mm f/6.5 lens. Previously, this “unique and specialized lens” from Rodenstock — as Phase One calls it — was not available with a physical shutter. The integration of the Phase One X-shutter means that Phase One IQ4 owners can control the shutter speed and aperture for this lens directly from their IQ4 digital back. Phase One did not disclose the pricing of the lens with the integrated shutter and it doesn’t sell them directly, but the previous shutterless version of the lens is available for $14,710.

Phase One has also announced that it will make an update for Cascable AB, available on iOS, in the coming weeks. The company says the update will provide performance improvements and enhanced mobile integration specific to the IQ4. The company says special attention has been made to enhance image quality workflows, achieve faster live view frame rates, improve WiFi connectivity, and provide access to images stored directly on the IQ4. Phase One explains that a significant workflow improvement allows for viewing images saved to the IQ4 and selective transfer of images to the iOS device. This new storage access feature process saves time and bandwidth for users of the Phase One IQ4 platform.

No specific timeline for release was provided.