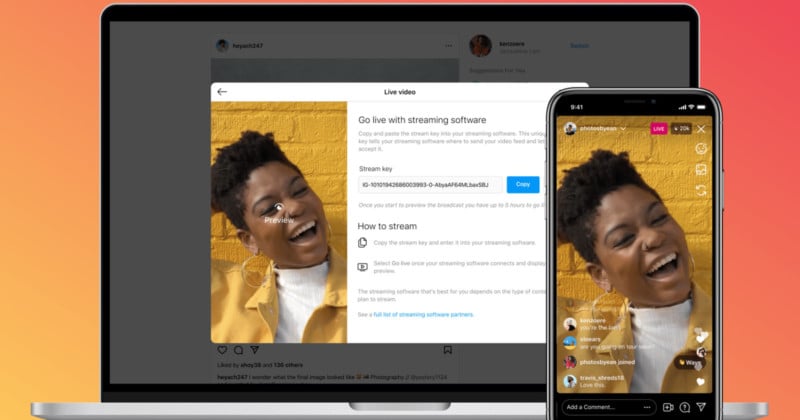 Instagram is testing a new Live Producer tool that allows creators to go live from a desktop using external streaming software in a move that shows the app’s continued focus on video in 2022.

Until now, creators could only broadcast video in real-time on Instagram Live from their smartphones. However, with Instagram Live Producer, streaming on the app will work as on other live-streaming platforms, like Twitch and YouTube.

The new functionality will allow creators to use production features outside the traditional phone camera, including additional cameras, external microphones, and graphics for their live stream, all through external software like OBS, Streamyard, and Streamlabs.

Techcrunch reports that Meta confirmed that the tool is still in the testing phase and is not fully rolled out yet.

“We are always working on ways to make Instagram Live a meaningful place for shared experiences,” a spokesperson from Meta tells TechCrunch.

“We’re now testing a way to allow broadcasters to go Live using streaming software with a small group of partners,” adds the spokesperson.

You can now go live on Instagram using streaming software (OBS, Streamlabs etc) via your desktop.

The screenshot indicates that Instagram will have a “Go Live” screen that allows users to enter the title of their live video and select their audience. The “Practice” audience option will not broadcast the live video to anyone and the “Public” option will broadcast to their followers as a normal live video would.

According to Meta, Live Producer will enable creators to use a stream “key” — a line of program code — to connect to the Instagram Live back-end. That will then enable them to run their content capture through their streaming provider of choice, with initial support for OBS, Streamyard, and Streamlabs, which will then feed into their Instagram broadcast.

The company didn’t say when it plans to roll out the tool to all users.

The test comes after Instagram head, Adam Mosseri, stated that the social media platform was “no longer a photo-sharing app” at the end of last year and Instagram put an even bigger focus on video and adopting more TikTok-like features in 2022. Earlier this month, Zuckerberg announced that Instagram is testing a full-screen feed that strongly mimics the company’s rival.

An internal memo last month revealed that Meta chief product officer, Chris Cox, said Instagram’s TikTok video clone Reels is one of the few “bright spots” for the company and warned employees about “serious times ahead” due to slowing growth.

In the company’s fourth-quarter earnings report for 2021, Meta CEO, Mark Zuckerberg, said that Reels is now Meta’s fastest growing content format and makes up more than 20% of the time that people spend on Instagram.